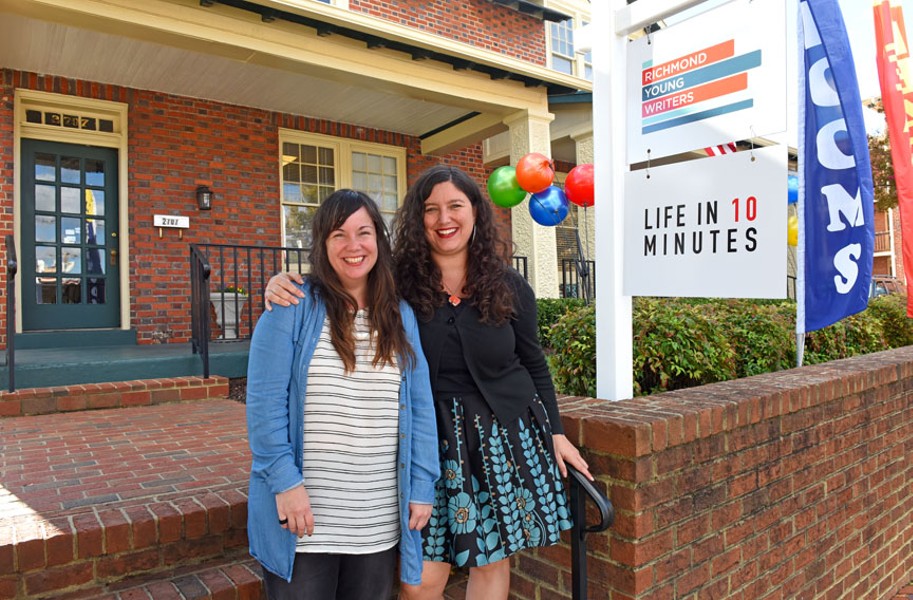 Scott Elmquist Bird Cox and Valley Haggard are leading the charge to get kids interested in the freedom of creative writing.

Five teenagers sit at a table that fills an entire room above Chop Suey Books in Carytown. The sounds of bookstore customers creak through the thin walls. Writer Bird Cox is leading them in an exercise of abstract comparisons, where they liken themselves to things like seasons, times of day and condiments.

Jamie, a 13-year-old with partly purple hair, pulls her headphones out of her ears and wraps them around her fingers while comparing herself to an instrument. “I’d be a tuba or drums,” she says.

Sam, also 13, chooses a pigeon as his animal “because you get free food and get to live in the city.” Cox listens intently and offers insight into how their choices reflect their writing.

It’s hard to believe you could get even a closetful of young people willingly scribbling away in notebooks, but Cox and her co-founder, Valley Haggard, have been doing more than that for eight years now as the leaders of Richmond Young Writers. This month they celebrate their move to a new, larger space, two blocks away, along with the adult version of their creative writing workshops, Life in 10 Minutes.

They’re celebrating the way that only writers can, with a weekend of renaming ceremonies, surrealism workshops, tarot card readings and writing seminars.

“Valley and I dreamed up every bizarre writing experience that we’d want to do in our dreamland together and made it a reality,” Cox says, describing one workshop as a “vision quest.”

“Sally Kemp said, you two have to meet, I’m sending you on a date,” Cox says. “So we met and fell in writer love. We figured out that we had the exact same vision for a creative writing program for kids.”

They first worked out of Chop Suey’s space and then rented the attached room when it came available in 2014. Attendance in their weeklong summer programs and spring and fall series has grown steadily, and six other teachers have come aboard.

“The first year, Valley taught four summer weeks. Now we teach 20,” Cox says. “Each summer we have a wait list, so we decide on more workshops next summer. Then we add them and we still have a wait list.”

The new space doubles their capacity. “The Richmond Young Writer work is invaluable to me personally — hopefully it also benefits the kids, too,” Cox says, laughing.

The students in class seem to fulfill her hopes.

“It’s a friendly atmosphere,” says Gbari, 16. “Like, in schools when you write, they say, do it this way, use this form. But here you can explore different styles freely.”

Some express a desire to pursue writing careers. “My parents always force me to sign up to camps,” Jamie says. “And this is one of the ones they forced me to do, but I actually really like it.” S