The FX show “Atlanta” begins with a bang — a literal bang.

Series creator and star Donald Glover introduces the audience to protagonist Earnest “Earn” Marks (Glover), his cousin and burgeoning mix-tape rapper Alfred “Paper Boi” Miles (Brian Tyree Henry), and spaced-out sidekick Darius (Keith Stanfield), as the trio engage in a verbal altercation that ends with a shooting and a quick cut to a tracking shot of Atlanta.

The viewer is left off-balance and confused — exactly as this uncompromising, dramatic and surreal comedy intends.

As the season unfolds, we witness Earn’s attempts to make something of himself by transcending his semihomelessness and transforming his dead-end personal and professional trajectories. He tries to manage Paper Boi’s blossoming career, win back his longsuffering daughter’s mother, and balance family pressures with get-rich-quick schemes. Along the way, we watch Glover’s character attempt to make his mark.

Based on my description, “Atlanta” could be a bleak and painful watch. But the writing and incredible ensemble cast pack incredible depth and nuance — including standout performances by the show’s leads and Zazie Betts, who manages to convey her hope and frustration with Marks without being reduced to a shrewish stereotype.

In a recent Salon.com interview, Glover said that the driving force behind the show was to make the audience experience what it’s like to be black. With “Atlanta,” Glover shows the precariousness of contemporary black life, merging the mundane with the fantastic.

Glover’s thematic focus feels like the culmination of his broader work throughout the last decade. From a writer on “30 Rock,” his portrayal as nerdy Troy Barnes on “Community,” to his hip-hop alter ego Childish Gambino, Glover’s artistic career has investigated being black and being seen as black.

With “Atlanta,” Glover gives us his most mature, fully formed and provocative vision of contemporary African-American life. 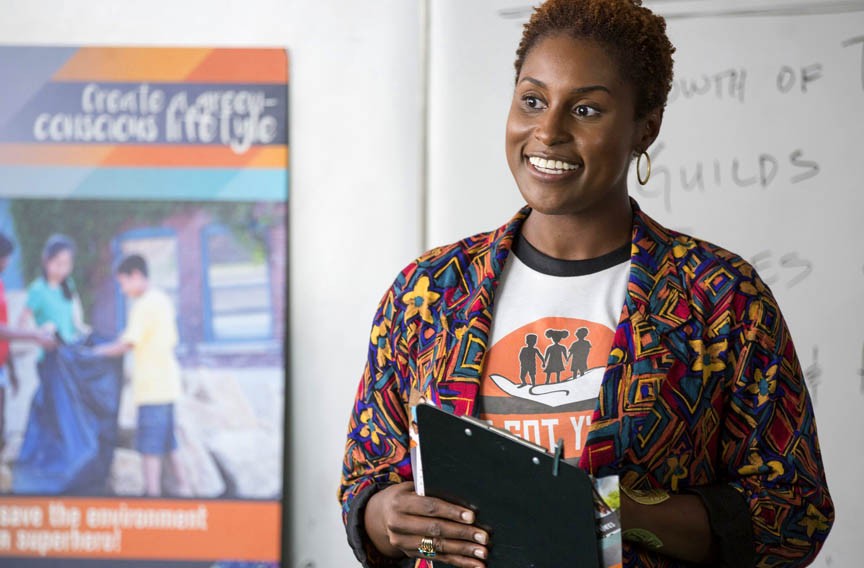 In new series on HBO, “Insecure,” actress, writer, director and producer Issa Rae offers an idiosyncratic exploration of the misadventures of an awkward black young woman, Issa, played by Rae, and her best friend, Molly, played by Yvonne Orji. Funny, thoughtful, vulgar — and yes, awkward — “Insecure” refashions the tropes of the sitcom. It places the professional and personal travails of two black women front and center.

The premiere episode presents quotidian experiences that Issa and Molly will confront and endure throughout the season. Issa is the token black employee at the Los Angeles-based We Got Y’All, an education nonprofit founded by a white woman. Her friend Molly is an accomplished, ambitious and single young corporate lawyer at a firm where she’s the only black employee.

Scenes of both women’s lives at work provide rich moments to examine issues of race and gender in the workplace. Issa’s white colleagues wonder what James Baldwin would say about race in 2016, and Molly wows her predominantly white male corporate colleagues during a presentation by asking, “Why do we need trees?”

The humor often works because Rae is unafraid to make the audience, and her characters, feel insecure by making race, gender and class central to jokes about everyday life. Rae never settles for an easy punch line. She uses humor not to deflect, but to engage and critique.

Although “Insecure” marks Rae’s first foray into scripted television, her show demonstrates a deft touch, reflecting work from her 2011 YouTube series “The Misadventures of Awkward Black Girl,” with help from co-creator and veteran comedian Larry Wilmore — most recently host of Comedy Central’s “The Nightly Show.”

Since 2012, Rae has had a development deal with HBO and as recently as last year there was speculation that the show would not be produced. Instead, Rae has created a must-see show that reinvigorates timeless television themes of love and work while feeling revolutionary for presenting black women being themselves.

Both programs are examples of emerging auteurs. Where “Atlanta” largely presents a portrait of working-class black men, “Insecure” focuses on white-collar women. What connects both shows is a commitment to an honest and idiosyncratic portrayal of contemporary black life that confounds traditional expectations of what we traditionally see on television. S