Virginia Rep Begins Its Transition With a New Artistic Director 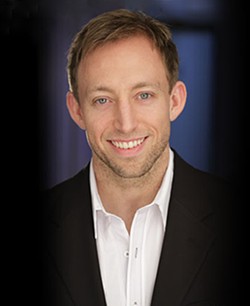 Virginia Repertory Theatre, central Virginia’s largest professional theater and one of the most influential performing arts organizations in the state, officially announced the hiring of a new artistic director today.

Nathaniel Shaw will assume his post July 1, taking over for Bruce Miller, a co-founder of one of Virginia Rep’s originating companies and a leader in the local arts community for 41 years.

The announcement confirms what had been an open secret in the theater community since the end of March, when Virginia Rep held meet-and-greet sessions to allow local community leaders and theater professionals to get to know Shaw. Among his many credits, the incoming AD was the founding artistic director of the Active Theatre in New York and most recently directed the highly praised production of “Peter and the Starcatcher” at Virginia Rep last fall.

Of particular interest to many local theater-watchers is Shaw’s experience in developing new original works. At the Active Theatre and in his current position as development director for Glass Half Full production company, he's had a hand in world premieres like the award-winning comedy “Body Language” in 2012. Virginia Rep has shown an increasing willingness to take risks on new work, with promising results. The company produced the world premiere of David Robbins’ novel adaptation, “Scorched Earth,” in 2012 and recently had a major hit with the locally developed “Croaker: The Frog Prince Musical.”

Shaw has a significant background in dance as well as theater. A graduate of University of Northern Colorado, Shaw spent several years as a professional dancer, originating roles with the Paul Taylor Dance Company, and working as an associate choreographer for the Broadway production of “Once.” His wife, Lisa Rumbauskas, has worked for years as a dance instructor and dance program administrator, and his parents were both dancers.

Shaw’s dance experience will be welcome at Virginia Rep, which relied on former Virginia Commonwealth University professor Patti D’Beck to give choreographic luster to recent splashy musicals such as 2014’s “Mame.”

Preliminary reactions in the local theater community have been uniformly positive. Josh Marin lives in New York but has more than a dozen local credits including an appearance in Shaw’s “Starcatcher.”

“Nathaniel is a visionary when it comes to creating life on the stage,” Marin says. “His experience, ingenuity and attention to detail are exactly what Virginia Rep needs as it enters a new era.”

Others praised his candor when answering tough questions about the direction of an institution like Virginia Rep, which in many ways is the cornerstone of the local professional theater community.

“I felt like he was really thinking about the questions we were asking and not just giving answers he knew we’d want to hear,” one Virginia Rep staffer said after meeting with Shaw.

For this observer, the transition from Miller to Shaw begs comparisons to when Richmond’s former LORT theater, TheatreVirginia, replaced longtime artistic director George Black with Benny Sato Ambush 15 years ago. In some ways, that transition seemed ill-fated from the beginning, with a dynamic new visionary proposing bold ideas for a company and a community not quite ready for them. TheatreVirginia folded in 2003.

In contrast, Virginia Rep has crafted this transition with extreme care, extending the search process enough to allow the candidate to work in town before accepting the new position and by keeping long-time managing director Phil Whiteway in his role for the time being.

Virginia Rep is a major enterprise with four stages and a huge educational touring operation. For decades, Bruce Miller has been able to hit the sweet spot of appealing to the masses while pushing the envelope enough to keep things interesting. Shaw will be inheriting a significant mantle but preliminary indications are that he's up to shouldering the burden.