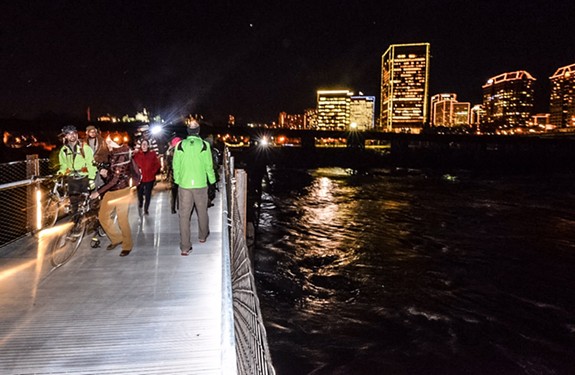 A few hundred people streamed across the James River on Richmond’s newest, narrowest bridge Friday evening to the sound of rushing water.

The T. Tyler Potterfield Memorial Bridge is named in honor of a senior planner for the city who died in 2014 at 55. Potterfield advocated for the bridge, which was built on top of a 1901 dam from Brown’s Island to the south bank of the James.

Ralph White, retired manager of the James River Park System, recalls climbing across the once-shabby structure when he first came to Richmond in the late ’70s. “Oh, of course it was not allowed,” he said, “but a lot of young guys did it.”

White was among the first to cross the $11.3 million bridge.

“It transports you to a not-urban experience,” he said. “And you have a broad vista. So it’s almost this portal experience. You leave the concentrated city and you come out on this narrow thing that actually opens up everything.”

Mayor Dwight Jones, city planning director Mark Olinger and Potterfield’s widow, Maura Meinhardt, cut a ribbon on the Brown’s Island side, seconds after the skyline lit up from the Grand Illumination downtown.

Donna Winborne, who lives on Forest Hill Avenue, said she commutes to work downtown on her bike three or four times a week using the Lee Bridge.

“But this will be better, quieter,” she said. “You feel protected. You can concentrate on your surroundings, appreciate the sights, and not have to worry about cars or somebody on their cell phone who’ll swerve. It’s much safer.”

The bridge is wheelchair accessible, meant for bikes, pedestrians and all non-motorized forms of transportation. Construction took a little more than a year.

Heather Sykes and Thomas Cooper, who live in Manchester, said they’ve been waiting for it to open. Sykes walks to work downtown across the Mayo or Manchester bridges. “I don’t know that it’ll save me any time,” she said, “but it’s a nicer commute.”

The completion of the 1,600-foot-long bridge coincides with the recent installation of “A Path Untraveled,” a public art project by Denver artist Joshua Wiener of eight 17-foot steel rings. The rings will traverse the southern path to the bridge.

White said the bridge can become a defining city feature, likening it to the St. Louis Gateway Arch.

“I think it’s a seminal experience for people in Richmond from this point on,” he said. “Let’s face it, Monument Avenue is only going to appeal to one group. But this is egalitarian, people of all cultures, people of all abilities.”