Will Richmond’s glowing signs go out with bang or a flicker? 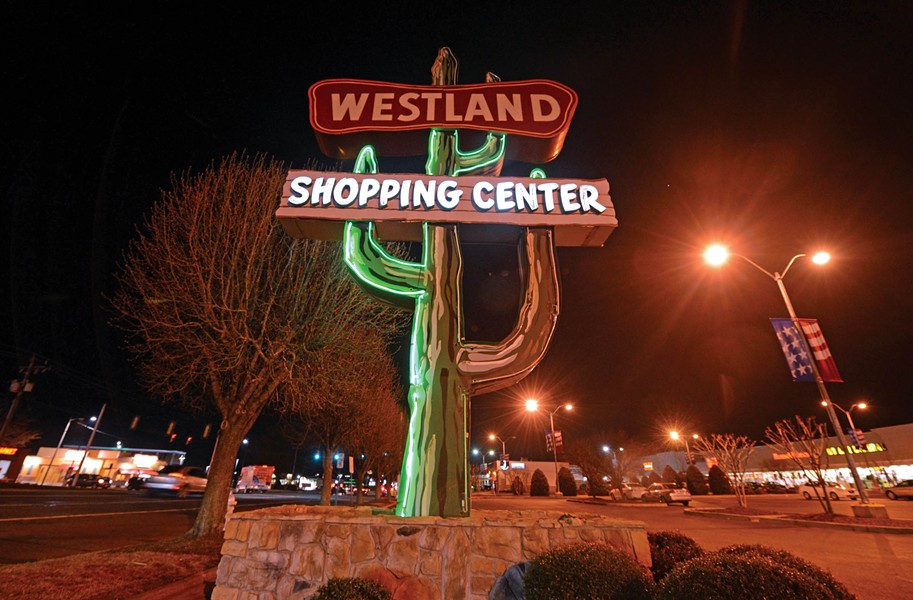 Scott Elmquist The neon cactus at Westland Shopping Center in Henrico — which looks like something out of a Coen Brothers movie — is a historic landmark.

Sabah Zaki is a neon man.

Since 1978, he's worked in neon: heating glass, bending it, shaping it, filling it with gas. As the owner of Commonwealth Sign and Design, he loves neon, he says — but she's a dangerous mistress.

"It's a hell of a damn thing," Zaki says, surrounded by signs and their makings in his workshop. "It takes four years to do well."

The glass must be heated to 1,200 degrees so that it can be bent, and it shatters easily. Impurities are burned off with 15,000 volts of electricity. That's to say nothing of the dangers of working with heated mercury, which can cause heavy metal poisoning if inhaled.

But after mastering the art, men such as Zaki are seeing less demand for outdoor neon signs. Looking around Richmond, you can tell. The sign for Byram's Lobster House was removed in 2012, and sits in a lot in Chester for safekeeping. The billiards-themed sign for the Triple Triangle has been dark since the bar and pool hall closed three years ago. The signs for Bill's Barbecue locations around the city have been taken down.

When it came to outdoor signs, neon once reigned supreme. From the 1930s to sometime in the '70s, the signs were the embodiment of prosperity. Tastes changed, and the attraction to external neon — the kind where you can see the shape of the glass — was replaced by flashing lights and embossed plastic signs. Initially, those signs, like the letters on a McDonald's building, were lighted by neon. But in the past few years LEDs have been replacing them.

"Everyone's pretty much gone away from neon due to the cost of maintenance," says Matt Gallienne, sales manager for Talley Signs. Talley used to specialize in neon, but now works mainly in LEDs. In the past few years, Talley replaced the neon backing with LEDs for both the Suntrust and Bank of America buildings downtown. LED is much easier to deal with, and requires a fraction of the electricity. "Neon is a very fragile glass," Gallienne says. "When you're doing a job that involves neon, every two or three times a piece breaks."

"The only things that neon is being utilized for in signage are for historic reasons," he says. "Or a customer or architect is trying to give something an old feel." That's the case with the sign for the old Interbake Food plant, which is being turned into apartments. The sign on top of the building reads "Home of FFV Cookies and Crackers," and all but the "FFV" is made of neon. Talley is renovating the sign, as well as three signs that belong to the Valentine Richmond History Center. The Valentine is having the signs refurbished to add to the others hanging on the exterior wall over the parking lot, and hopes to unveil them in a few months.

As much as the Valentine is known for its neon collection, the museum has limitations in what it can accept, and turned down offers to accept the Byram's lobster sign and a sign from Bill's Barbecue, in part because it already has several from restaurants.

"Because of their size and the challenges of maintaining, we can't take them all," says Bill Martin, director of the Valentine. He adds that outdoor signs are much larger than people perceive, and that once a sign has entered the collection, the museum has committed to taking care of it indefinitely.

"It's becoming harder and harder to find people who can work on these pieces and find the replacement parts," Martin says. Though the museum can't take everything, there are a few pieces of neon that Martin would love to get his hands on, such as the Satellite Restaurant sign on Jefferson Davis Highway. "I would probably throw myself on a sword for that one," he says. "It's got that wonderful Space Age aesthetic."

The future of neon isn't entirely bleak. The large neon cactus advertising Westland Shopping Center in Henrico County has been named a historic landmark, and is required to be maintained. In 2005, Talley renovated the large neon sign atop the Berry Burk building downtown. The sign had to be cleaned and have new gas pumped in, but the glasswork was completely fine.

Talley also recently rehabbed the sign for the Chinese restaurant Joy Garden on Broad Street. The company refabricated a shell of the sign onto the existing structure, and although it doesn't have neon letters like the former sign, the outline of the sign is new neon.

All of this is good news for neon men such as Zaki, who specializes in smaller indoor signs and helps Talley sometimes with repair work.

"Neon has become a hard commodity to get. Everywhere you go, there's only a few people doing it," Zaki says. "If we die, if those old people die, the young people won't do it." S