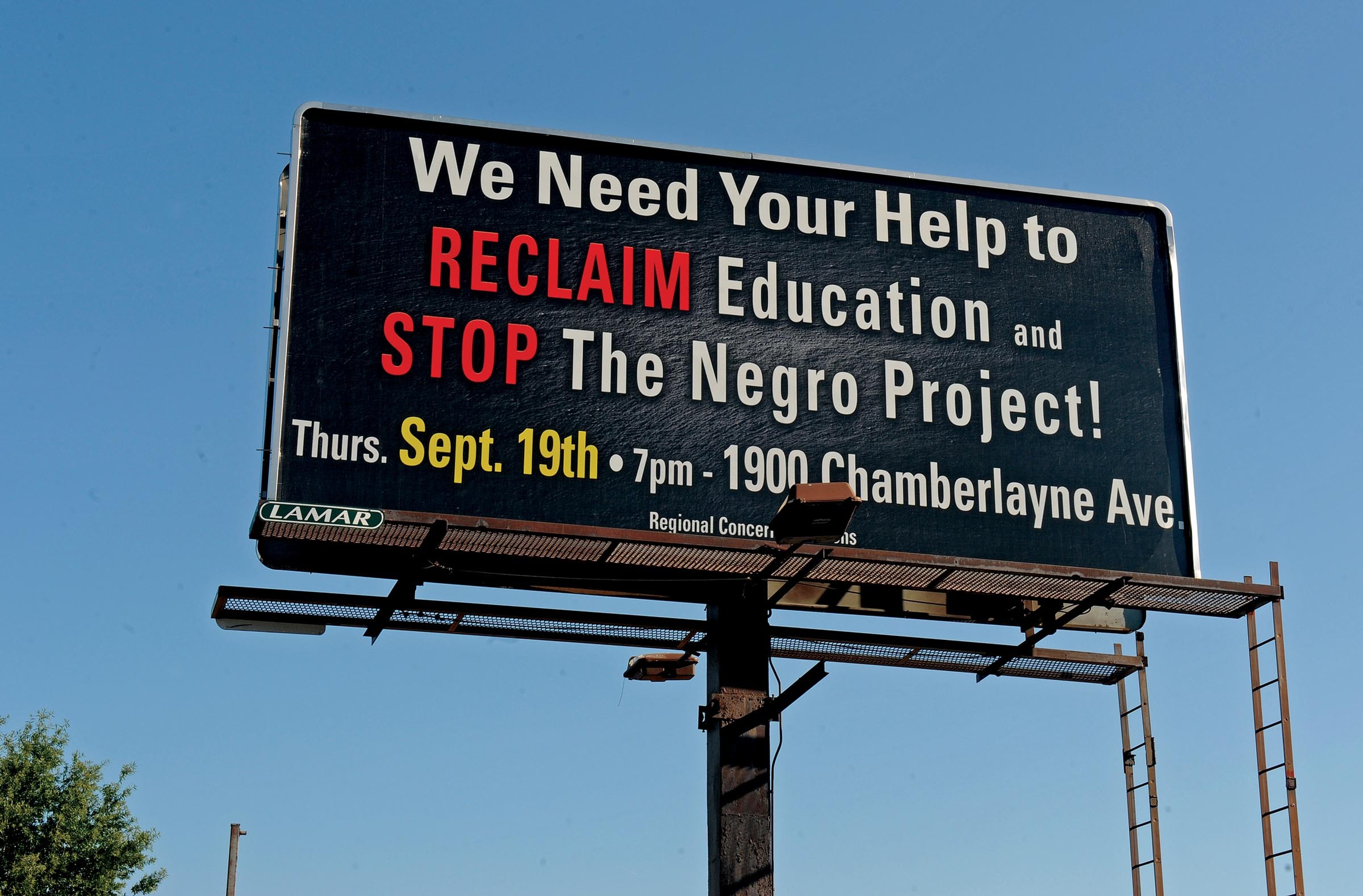 Editor's Note: This article has been altered from its original version to include more information on the historical context of the Negro Project.

In the latest episode of Inflammatory Messages Displayed Near Interstate 95, the group behind the anti-abortion billboards that read "Stop the Negro Project!" has taken down the signs, but says new ones will go up, including one in Church Hill.

The billboards advertised an anti-Planned Parenthood seminar sponsored by a group called Regional Concerned Citizens. That organization, which is loosely associated with the Virginia Christian Alliance, no longer is involved and the event has been moved.

"Right now there's no story other than, 'Ooh, the words negro project caught people's eye,'" alliance board member and seminar leader Terry Beatley says of the signs. "It doesn't mean what people are thinking."

The Negro Project was a movement started in 1939 to educate and provide birth control to black women. Over time, it has come to be seen by some -- including the Christian right -- as a sinister, racist plot to eradicate African Americans through abortion.

After three seminars at Eternity Church on Chamberlayne Avenue, the billboards went up over Labor Day weekend to increase attendance for a fourth event on Sept. 19.

Gilbert Wilkerson, who is an RCC member and black, says it supported Beatley's seminar "to put a black face on it."

"The black community is bleeding and what we're trying to do is stop the bleeding," Wilkerson says. "The No. 1 issue is abortion."

The billboards stirred controversy and widespread media coverage during the few days they were up. The pastor of Eternity Church, which is listed as the location for the event, also spoke out.

"We strongly repudiate the language used in their billboards," pastor J. David Singh says in a statement posted on the church's website, adding that he did not know the seminar was being held at Eternity and was not welcome.

VCA President Don Blake says there was a misunderstanding between RCC and the church. "What happened with the church is that the secretary was on vacation," he says.

Blake says the seminar has been moved to Mount Olivet Baptist Church. A church spokesman didn't return a message by press time.

A day before Singh's statement, RCC member Emmett Bailey told NBC-12 he had no plans to take the billboards down. Wilkerson says members changed their minds as scrutiny grew. VCA should be able to handle the seminar going forward, he said.

"All the controversy was behind us being involved," Wilkerson says. "This is an event for the black community by black people."

The new billboards, which are being funded by donations, will go up along I-95 and 25th Street. Blake says the exact language is still being ironed out.