Nearby residents respond to VCU’s master plan for the future 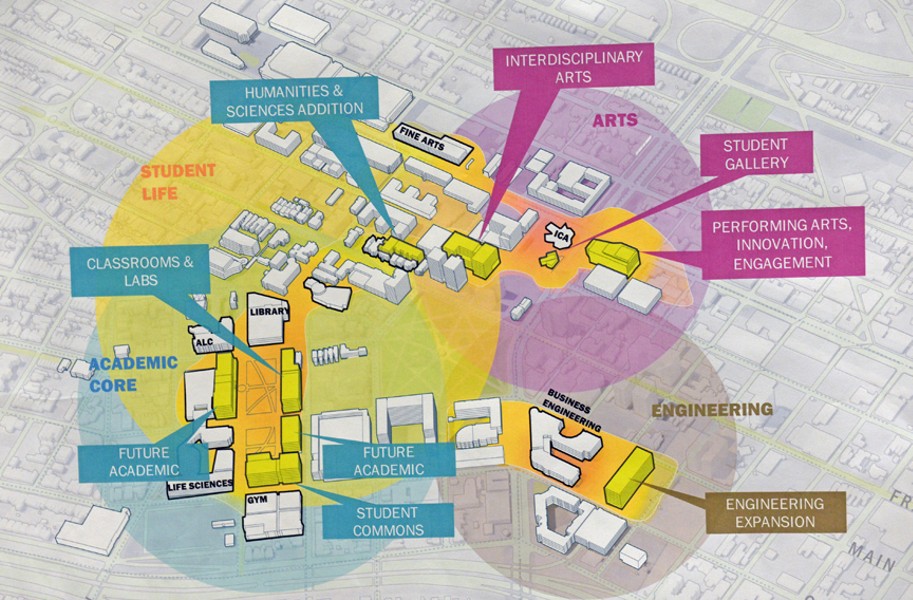 One of the master plan’s goals is to “advance a culture of interdisciplinary collaboration” on campus by integrating academics and student life.

Last week, Virginia Commonwealth University officials unveiled a draft of its master plan during a series of on-campus open houses. Students, faculty and community members perused about half a dozen easels, each displaying a facet of the multiyear plan and encouraging onlookers to write any questions, concerns or comments on giant notepads.

"It's really sort of a vision for the future," says Kevin Petersen of Ayers Saint Gross. "What we want to do is give the community the opportunity to provide feedback, which will get integrated into the final document for the plan."

Six principles guide the plan, including linking the academic and medical campuses, improving safety and accessibility, and delineating the campus. The plan is broken into short, midterm and long-term projects over the next several years.

Not all nearby residents are convinced. Todd Woodson, who's lived in Oregon Hill for 18 years and is the current neighborhood association president, says he's heard it all before.

"We have a longstanding distrust of VCU," Woodson says of himself and his neighbors, recalling the expansion of the former City Auditorium into what is now the university's Cary Street Gym about 10 years ago. "Where their last master plan said they were going to build a certain type of facility, they decided to build a much bigger facility. They bought a beautifully restored 20th-century stable and demolished it."

Wary of future demolitions and encroachment, Woodson says he's been to several meetings regarding the master plan. He worries that regardless of what's outlined early on in the plan, university officials will expand onto neighborhood property.

"The master plan seems to be a convenient kind of broad brushstroke," Woodson says. "But if something else comes up, they don't really adhere to it. And I don't think they really listen to us."

Longtime Carver resident Jerome Legions, who's been president of the Carver Community Civic Association for nearly two years, says his neighborhood has had a different experience as one of the university's neighbors.
"We've never had to fight VCU over any development that we didn't want in the neighborhood," Legions says. "Because we have been supportive, we've helped them become the university they are today."

Legions says living in an area so integrated into an urban campus comes with its obvious challenges, like an abundance of short-term, transient housing that doesn't contribute to the safety or overall well-being of the community being. But overall, he says, VCU's expansion into Carver over the years has been more positive than negative. The neighborhood is safer now, he says, because both the university's and the city's police departments are responsible for the area. It's also more walkable and the pleasant streetscapes serve both the university and neighborhood residents.

As for the One VCU Master Plan, Legions says he's not worried. The university has what he describes as a "gentleman's agreement" when it comes to encroachment.

"VCU knows what the boundaries are in Carver," Legions says. "What they usually do, if they're interested in a space over here, they'll come say 'Will you invite us to use this space?'"

Carver residents don't have a history of fighting the university's proposed development, Legions says, but he believes university officials would listen if the situation arose.

"Whenever they decided to bring something over to us, it was always sort of an improvement to the neighborhood too, such as the Siegel Center," he says. "VCU has been a pretty good partner with us."

Woodson and fellow Oregon Hill neighborhood association member Scott Burger would like to strike a similar agreement with VCU, preferably in written form. They have reached out to university officials requesting clearly stated boundary lines around Oregon Hill be added to the master plan. They also want a written commitment that the university will not encroach farther into the historic district south of West Cary Street beyond its current facilities, with a memorandum of understanding endorsed by President Michael Rao and the Board of Visitors.

"We would like to work with VCU. They're our neighbors," Woodson says. "We would just like to have a more symbiotic relationship where we could trust them not to come in and knock houses down in our neighborhood."

University planner Jeff Eastman says he's "honestly not sure" whether it will provide the requested written agreement, but community involvement has been a priority.

"What we've committed to do is work with the neighborhoods on those issues," Eastman says. He also notes that an open house was canceled due to tornadoes I the last weeks. "Those nighttime meetings we host are big opportunities to get feedback from folks from the community, so we definitely want to make sure we reschedule that."

Eastman says the consultants at Ayers Saint Gross are compiling and sorting all the feedback received at last week's open houses. Community members can also submit comments at masterplan.vcu.edu. Eastman says the goal is to present the One Master Plan to the university's Board of Visitors in December. S