In an otherwise hokey show, one performance makes it all worthwhile. 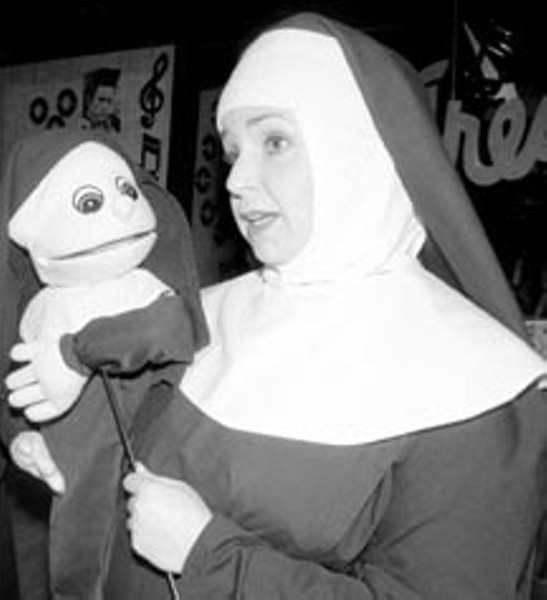 In between, the show (book, lyrics, and music by Dan Goggin) is laced with corny and irreverent jokes. For example, during a cooking show sketch, the nuns describe how to make Boy Scout treats: “first, get a dozen brownies real hot .…”

The musical performances are solid. Christina Longobardi is particularly good as the ambitious Sister Hubert. A sophomore at Virginia Commonwealth University, Longobardi shows off a powerful voice and a promising stage presence.

But it is Debra Wagoner as Sister Amnesia who single-handedly takes this ordinary show up a notch. She’s a joy to watch. Her childlike sense of glee is reflected in both her voice and physical mannerisms. During one scene, she sings with a raunchy puppet also dressed as a nun. The banter between ventriloquist and doll is hilarious. More impressive is the way Wagoner maintains two different singing voices during the routine. The puppet has a brassy, old-fashioned Broadway voice. Though just as powerful, Sister Amnesia’s voice contains more color and tone.

To be honest, a show consisting of just Wagoner and a singing puppet probably would be more entertaining (and sublime) than “Nunsense.” So if anyone in town is looking for a campy, one-woman show, they should sign up Wagoner, commission a script, and create an Ethel Merman puppet. It’s a guaranteed winner. Until then, Swift Creek Mill Theatre has this remarkable demonstration of musical prowess all to itself. S