The creatures in Georgianne Stinnett's transcendent photographs take viewers beyond the predictable. 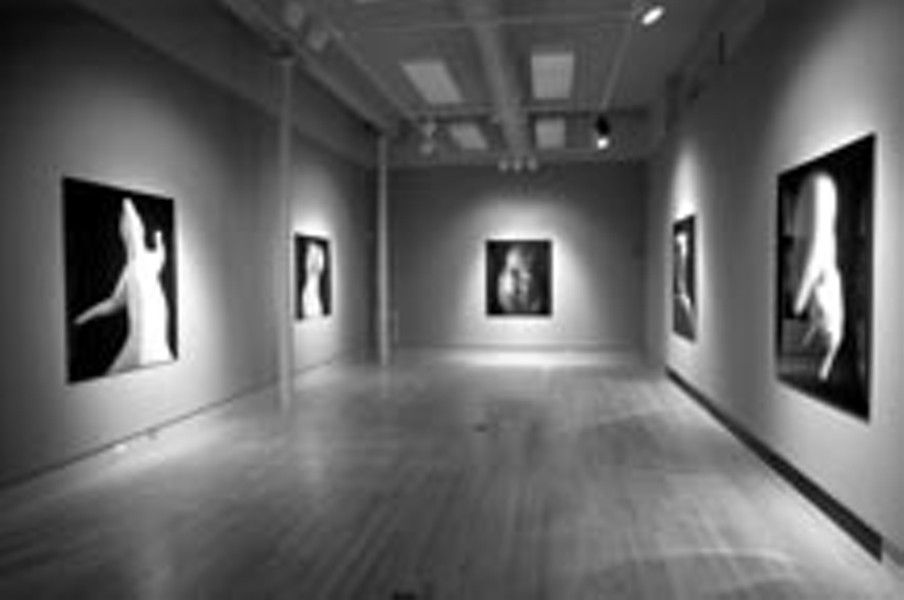 And then, as my own reflected image emerges dimly from the "ooze," a question dawns on me: Is Stinnett making a Darwinian statement with her photographic installation? To view "Squirrel," along with six other photographic images of animal forms — a rabbit, deer, lion, owl, weasel and raccoon — is to be jarred into a visually poetic confrontation with biomorphic evolution as we understand it — or imagine it.

This is a remarkable feat because Stinnett's photographic subject matter and technical approach are deceptively simple. But her craftsmanship is so perfect, her design sense so elegant and her aesthetic focus so pure that a visit to the installation, "Of Matter and Breath," is a sublime experience.

Now a catch: Stinnett didn't actually aim her camera at any animals to make these pictures. She uses simple and smooth taxidermist armatures as her points of departure. In most of the photographs she merely shoots the untreated off-white forms. In "Raccoon," however, the surface has been treated with overlays of warm amber paint or stain to heighten the sense of violence in the open-mouthed creature. In "Lion," the armature has been painted in marbled black and purple tones.

Stinnett also references indirectly the history of photography. In the mid-19th century, many people believed that the role of the camera was to replace sketching or drawing, to serve as the artist's notebook, to be a way of recording scientific data. That sense of recording phenomena of the natural world is suggested here.

But finally, Stinnett is a modernist. She has taken the familiar — if taxidermist armatures can be called the familiar — and ratcheted the images to heroic proportions. She provides viewers just enough information to grab their interest, but not too much: Meanings must evolve from the mind of the beholder. But oh, what information — threatening, playful, beautiful, ugly, elegant, common, wondrous — just like life itself. S

"Of Matter and Breath: Photographic Installation by Georgianne Stinnett" runs through April 1 at the Flippo Gallery, Randolph-Macon College, Ashland.