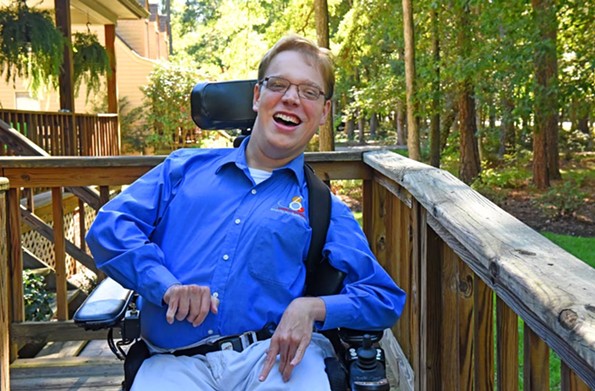 News from Washington about national health care legislation is enough to give dedicated followers whiplash. Repeal and replace. Just repeal. Republicans have the votes. Then they don’t have the votes.

This week, the Senate is set to vote on a bill after debating a version that passed narrowly in the House of Representatives. Several bills have surfaced, the latest of which the Congressional Budget Office estimates will leave 16 million Americans uninsured by 2026. But a final version of the legislation has yet to emerge.

For disabled Richmonders, the uncertainty is unnerving.

“Quite frankly, I’m scared,” says Matthew Shapiro. “You just don’t know what the system is going to look like.”

Shapiro, 26, is a self-employed consultant with 6 Wheels Consulting who has cerebral palsy. He works from his parents’ home and uses a wheelchair, with the help of private insurance and Medicaid.

“Living with a disability is expensive,” Shapiro says, noting that his chair cost $32,000. He sees politicians trying to score a political victory over something of vital importance to millions of Americans.

“They’re kind of playing with fire,” he says.

John Paul Cimino, the director of public policy for the Virginia Board for People with Disabilities, says he has been following the legislation closely, too.

“There’s really two sides to this: There’s the private insurance market piece and the Medicaid piece,” he says. “The Medicaid piece is the part that is most jarring to people who advocate for folks with disabilities. The changes to the program being discussed would essentially remake Medicaid into a different program.”

Medicaid, a government health care program established in 1965 for low-income Americans, is also a large source of funding for the care and equipment needs of disabled Americans.

Cimino says the proposed legislation looks to change it to a program where the federal
government provides a set, capped amount of money to states per enrollee. “So if next year prices skyrocket for health care, the cap put in place wouldn’t adjust for that,” he says.

And inflation rates, in the latest Senate version, are pegged to a formula that won’t keep pace with escalating costs of long-term care. “The real cuts to Medicaid are going to be a snowball effect,” Cimino says. “You’re not going to feel them all immediately.”

Cimino says that the bills being debated are not simply a return the status quo before President Barack Obama’s Affordable Care Act. It’s a significant redesign of the Medicaid program. It puts the brakes on growing efforts to allow people with disabilities stay at home, in their communities.

“Medicaid is our lifeline,” says Kim Goodloe, the president of Arc of Virginia, a nonprofit that advocates for people with intellectual and developmental disabilities. “It allows us the ability to run our business,” she says. “The waiver basically gave us our life back.”

Goodloe and her husband have twin sons, both 28, who have tuberous sclerosis. It
took 16 years to get a waiver for Matthew Goodloe, whose condition requires round-the-clock care. It means he has an at-home Medicaid-funded care provider while his parents work.

“His life is based around his medical needs and his ability to do things rather than my schedule,” she says. The waivers offer an alternative to the only care that the state is mandated to provide — institutionalization.

“When you go into nursing care, you go in to die,” says Goodloe. “Being fed three meals a day, given a craft activity, put in a bus to go to the mall is not living in the community.”

Few people want that isolation for their loved ones, she says, and 12,000 Virginians are waiting on that waiver. The Goodloes are still haven’t received one for their other son, Chris, which will also provide peace of mind for them about their sons’ care after she and her husband are gone.

Cimino says it gets tricky on the private insurance side, because the proposed plans are slightly different, and states could decide whether to accept certain elements. But the Affordable Care Act, among other things, provides a backstop for people with disabilities who don’t qualify for Medicaid.

“The three big things that that did … was ensure companies couldn’t refuse you because
of a pre-existing medical condition,” he says. “They couldn’t charge you an exponentially high rate in relation to other people … and you have to cover at least a certain set of services.”

Where the legislation will land on those elements and what Virginia would choose to accept is anyone’s guess, Cimino says.

“Part of what the Republicans are trying to do is get rid of the whole pre-existing condition piece,” Shapiro says. “Well, that would leave me up a creek without a paddle.”

Right now, it’s a combination of Medicaid and private insurance that pays for things such
as Shapiro’s chair. He says it’s like a game to try to figure out the cheapest combination of claims to make. “It shouldn’t be a game,” he says. “You get someone the piece of equipment, and you figure out how to pay for it later.”

For Goodloe, her family’s small business has struggled to provide affordable premiums for their 30 employees, while caring for sons who need $4,000-$5,000 worth of medication a month. The Obama-era legislation lowered premiums by almost $100,000 a year, she says.

As she watches politicians talk about health care, Goodloe says she’s struck by how uninformed some of them seem to be. “The ‘devastating impact of Obamacare’ is such a broad statement,” she says. “I’m not doubting there were people hurt, but they're just pitting one person against another.”

The outrage that some people felt at higher premiums under the Affordable Care Act was frustrating for her to hear. “That’s what our family has felt since the day my boys were born,” Goodloe says. “We paid four times what any other couple did [before Obamacare] because our sons were born with a disability. But where was the outrage then?”

CORRECTION: The number of Americans left uninsured in the latest Senate bill was incorrect when this article was first published. The Congressional Budget Office estimates that 16 million fewer people will not have health insurance, although the current bill hasn't been submitted to its office for review yet.