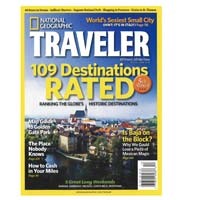 Richmond, the global historic destination, made the list — but perhaps for the wrong reasons. National Geographic Traveler's most recent cover story, “109 Destinations Rated: Ranking the Globe's Historic Destinations,” finds a place for Richmond at No. 81.

It's the magazine's fifth annual survey, based on ratings from 280 experts on the lookout for “destination stewardship … how well historic places are withstanding mass tourism, neglect, ravages of nature and wrecking balls.”

Leading the list of locations that are tops in preservation is Melk Abbey, a Benedictine monastery in Wachau, Austria. The Rideau Canal corridor in Ontario and Ghent, Belgium, were second and third respectively.

The first American entry, Charleston, S.C., weighs in at 15th, followed by the medieval town of Cesky Krumlov in Czech Republic and Edinburgh, Scotland. Asheville, Savannah and Boston rank in the 30s, with Charlottesville and Monticello at No. 31.

At 81st (between Burhara, Uzbekistan, and the coastal city of Hoi An, Vietnam) is Richmond: “The capital of the Confederacy,” according to the magazine, “‘has great historical resources but has done a terrible job of protecting them.’ An ‘engaging’ riverfront revitalization instills hope for improvements.”

It's great to get a tourism shout-out, but clearly there's work to be done.

Incidentally, ranking near the bottom of the survey, among the “Worst-Rated Places,” is the U.S. Route 15 corridor from Charlottesville to Gettysburg, Penn. The historic highway is chided for “suburbanization” and “development at any cost.”