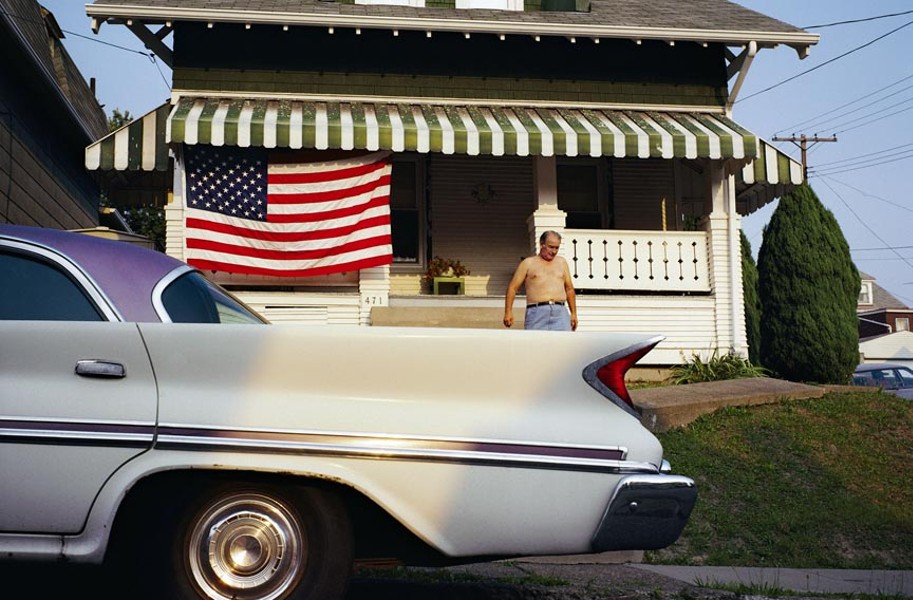 Nathan Benn’s “Fourth of July, Pittsburgh, 1990” captures a slice of America that whispers, not shouts.

This is it. All gut instinct and no thought. The shutter button depresses and the camera chirps. Will the photo turn out to be a chaotic mess? Or will it sum up a scene with the succinctness of a haiku?

This is how Henri Cartier-Bresson described the decisive moment in 1952, setting the stage for postwar photography. It’s the ultimate high, putting every ounce of formal training in the service of spontaneity.

Nathan Benn is one of the thrill seekers, but his legacy is almost entirely accidental. He’s preparing a speech and exhibition opening at the University of Richmond next week for his first and only book, “Kodachrome Memory, American Pictures 1972-1990.” It came out in 2013, more than two decades after Benn took his last photograph.

“After I stopped taking pictures, I had no interest in reviewing what I shot,” Benn says, from a friend’s home in Miami Beach. “When I finally looked through my catalog, it felt fortunate to have that distance in time.”

Benn had amassed more than 350,000 photographs during his 20-year tenure with National Geographic. Born into a working-class family in downtown Miami, Benn always felt that his best work was done “in my metaphorical backyard, taking pictures of private lives and normal Americans.” Even while shooting conflicts abroad, Benn went through the same process. He’d send 20 or 30 rolls to National Geographic, unsure of whether he’d made a slam dunk.

“Editors would pluck out maybe 10 percent, and the rest would be put in cartons inside a warehouse,” the 66-year-old says. “I just let the other 90 percent be forgotten.”

He and National Geographic held different opinions on what a good picture looks like. Yet there were moments of shared agreement, as with one popular photo in the monograph, “Fourth of July, Pittsburgh, 1990.” This picture suggests the sumptuousness of a half-melted sundae. A sweaty, shirtless man descends the front steps of his home, which is bedecked with an American flag. His legs are submerged in a milky pool — in actuality the massive tail fin of a 1960s Chrysler. To his right there’s promise and excitement: a tangle of power lines, a gravelly sidewalk and a late afternoon sun. It’s so perfectly American and yet it feels like a daydream. 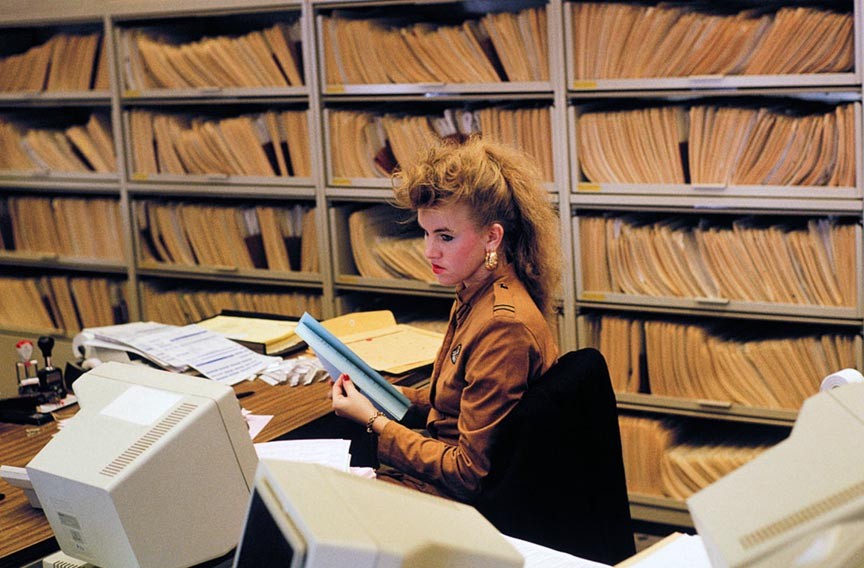 Another popular photo from the Pittsburgh series, which was Benn’s last assignment, finds him inside a law office. A secretary dressed in brown seems to merge with the manila folders surrounding her. It’s half bureaucratic nightmare, half fashion shoot. “That photo was pure serendipity,” Benn says. “But I worked my ass off for it. There are 999 other attempts that are complete misses. That was the pattern for me.”

When Benn quit National Geographic in 1991, he shifted his attention to the Internet. There was no online portal for photographs then. Getty Images and Corbis Images didn’t exist for another five years. Benn saw an opportunity. He launched Picture Network International in 1993. Eastman Kodak later purchased the company, and Benn now serves as a trustee of the George Eastman House in Rochester.

“I wasn’t trying to anticipate Amazon.com,” he says. “I’m not that futurist. I just wanted an easier way to move photos.”

Benn also moved his family to Santa Fe, New Mexico, at this time, while keeping his company in New York. The desert city is a bohemian magnet, like nearby Taos. Dennis Hopper, Georgia O’Keefe, and D.H. Lawrence once lived there. “I’ll be standing in line at Trader Joe’s and see Shirley MacLaine,” says Benn, nodding to the Richmond-born actress.

With his in-demand digital chops, Benn was hired in 2000 as director of Magnum Photos, a consortium founded by the famous Robert Capa.

One of the photographers snubbed by Magnum, long before Benn arrived, was Robert Frank. In 1958, Frank released a collection of decisive moments, simply titled “The Americans.” The book’s influence on Benn is clear. It opens with a woman being splashed by an American flag. Bruce Springsteen calls it the visual equivalent of Bob Dylan’s “Highway 61 Revisited.”

“I found the mundane interesting,” Benn says. “A woman calling for a cup of iced tea, a man getting a haircut. Narratively, there’s no story there. But the image was compelling to me.”

Leaving Magnum in 2003, Benn started sifting through his back catalog. It took a decade to pick the images that make up “Kodachrome Memory.”

One sticks with him so much he calls it a self-portrait. It’s of a working-class woman standing by a Coca-Cola machine in a Greyhound bus station. The year is 1973, and Mississippi Delta is the place. Benn, just out of college, reverently called her “the Madonna of Coke.”

“I wish she would write me, to finish the story,” Benn says: “Dear, Nathan, I took a bus that day to Chicago and found a great job.” S

Benn speaks at Camp Concert Hall at the University of Richmond’s Modlin Center, on Feb. 8 at 6 p.m. “Kodachrome Memory” will show in the Harnett Museum of Art until April 3.