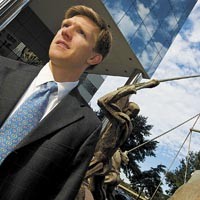 It's a wrenching scene: a mother, unconscious, breathing through a ventilator while her grown children stand around the bed in agony. None of them knows if she'd want to be kept alive in hopes of a miracle or allowed to pass.

For Nathan Kottkamp, it's all too familiar. As a lawyer with McGuireWoods and a member of several hospital boards, he focuses on medical ethics. He sees a need for people to be aware that if a loved one can prepare directions in advance spelling out end-of-life wishes, it can avoid unnecessary anguish.

Kottkamp has been so committed to educating the public that for the past three years the governor has named April 16 Virginia Advance Directives Day. Last year, Congress got in on the act, proclaiming it National Health Care Decisions Day.

Kottkamp chose April 16, the day after income taxes are due, in a nod to Benjamin Franklin's adage about life's only certainties being death and taxes. The day took on a new dimension when Seung-Hui Cho killed 32 people at Virginia Tech and then turned his gun on himself.

Kottkamp spearheaded the redrafting of the state's end-of-life laws to extend the right to predetermine one's health care to more than just end-of-life decisions. He's trying to help everyone — people with mental illnesses who know their decision-making may at some point become impaired, people who may face dementia or Alzheimer's — have some say in how their medical treatment unfolds, even when they can't speak for themselves.