Trails Manager for the City of Richmond 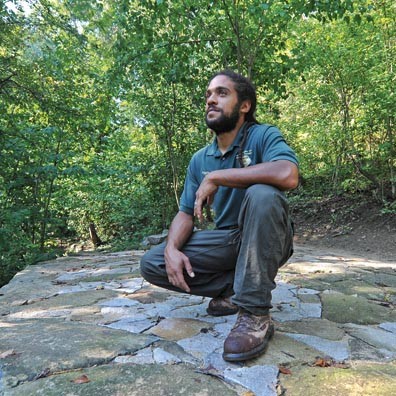 Walk — or drive, if you must — anywhere near Virginia Commonwealth University or the James River on any fall day, and you’re liable to see hundreds of people riding bicycles: students, commuters, outdoor adventurists. They’re everywhere. And as the city moves toward greener pastures and continues to become a more eco-friendly town, those numbers will only multiply.

Nathan Burrell, the trails manager for the City of Richmond, is one of the people working hard to ensure that it happens. He says it just makes sense.

“Richmond is very unique in that we have a river and a fall line right in the middle of the city,” Burrell says. “The amount of urban forest that we have here continues to give many opportunities for cyclists and the trails system. Luckily we’ve been able to capitalize on it.”

In seven years Burrell’s risen from an unpaid intern with the James River Park System to his post as trails manager for the entire city. Along the way he’s helped make Richmond one of the most widely recognized urban outdoor adventure settings in the country. In 2010 the James River Park was awarded best-in-dirt by Trail Runner magazine, and also has been recognized as the best urban park by Blue Ridge Outdoors Magazine.

In a show of just how important cycling is to the city, Mayor Dwight Jones recently started a Bike Pedestrian Committee, of which Burrell is a part.

“The Bike-Ped Committee is Richmond really saying that we’re ready to become a tier-one city when it comes to cycling,” he says. “We’re ready to recognize cycling’s importance.”

So is the world. Richmond recently learned that it had won a lucrative bid to serve as host for the World Road Cycling Championships in 2015.

“The end goal is for Richmond to truly be seen as an example, a Mecca for outdoor adventure,” Burrell says. “We have all the key elements to make it happen.”