Such are the careers of political campaign managers in "The Ides of March." 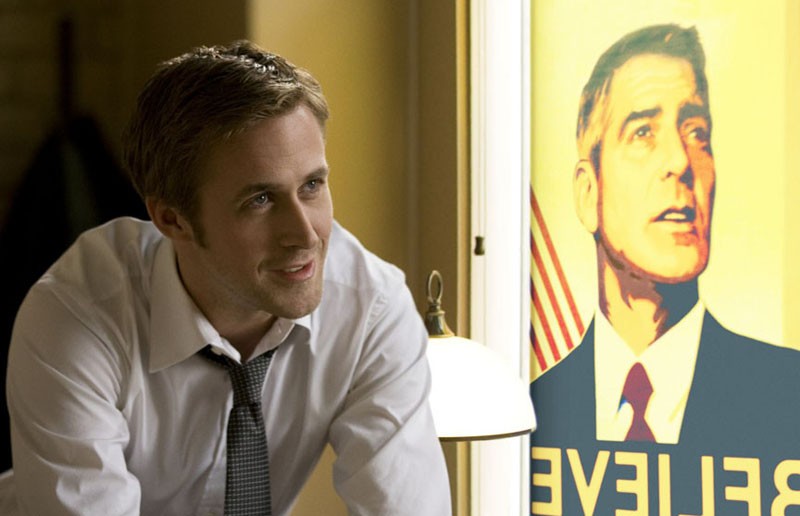 "None of this is about getting people in office." That would be a great tag line to the new political thriller "The Ides of March." But even better — it's an actual line in the movie, and although it could be taken as hand-holding or a signpost to the movie's main themes, it comes off simply as a nice, snappy bit of dialogue.

It's not the only one the audience gets to chew on during this political thriller about the machinations behind the scenes in a Democratic presidential primary. With a title like "The Ides of March" you know there's going to be a lot of back stabbing, and in that respect the movie doesn't disappoint.

It stars Ryan Gosling as Stephen Meyers, a brilliant campaign organizer whose gifts for spin and wickedness are being used for good (we're told) in the campaign of Gov. Mike Morris (George Clooney), a progressive Democrat, the kind of shoot-from-the-hip liberal who fends off faith-based issues by talking about his faith in the Constitution. He's so principled, he refuses to offer a Cabinet post to another Democrat whose views he dislikes, even though doing so would virtually guarantee the nomination. "He's a nice guy," Meyers says, as if talking about some rare zoological find. "They're all nice," scoffs Meyers' confidante at The New York Times (Marisa Tomei), hinting that the aura might not be as authentic as it seems.

That Morris could still win without stooping to anything unethical or even underhanded, we learn, is mostly because of Meyers. Meyers takes care of the unethical and underhanded stuff. His boss is too busy fielding tough town-hall-meeting questions to notice. Or he doesn't care to. That's the first lesson given by "The Ides of March," that campaigns are run by organizers, not the people for whom they work. There's just too many ways to screw the other guy for one person to keep track of.

We get plenty of ruthless examples, as when Meyers tells an underling to give the media scandalous information about the opponent that might be only a rumor. "I don't care if it's true," Meyers retorts to an objection with a wry grin, "I just want to hear him denying it. If we can get him denying it, the news stations will keep asking him about it."

Guys like Meyers, we learn, don't use strategy and tactics as much as ruse and subterfuge, a fact Meyers forgets too easily beginning with a fated call from his opponent, Tom Duffy, played by Paul Giamatti as an exquisitely slimy campaign vet. Philip Seymour Hoffman plays an equally grizzled counterpart, but he's not nearly as vulpine as Giamatti's Duffy, who ardently wants to bring Meyers over to his team. He tells the youngster he's the best, and at those words you can see Gosling's straight back and broad shoulders preen northward just a centimeter or two more. If your opponent is vain, flatter him. If Sun Tzu didn't write that, he should have.

And Meyers should have read it. It's not long before he's in bed with a hot young campaign intern (Evan Rachel Wood), and you just know that means he's also in hot water. By the dictates of good screenwriting, Meyers will be tested, as will our opinion of him. "He'll let you down sooner or later." It's a line in the movie about one of the characters, but it could fit just about any of them.

Clooney directed "Ides" and co-wrote it with Grant Heslov and Beau Willimon, basing their screenplay on Willimon's 2008 play "Farragut North," about the 2004 Democratic primary campaign of Howard Dean. The result is sprinkled with just enough ruefulness for the cynicism of our age without crossing over into sanctimony. If Clooney is the Dean stand-in, that's the point where the film falters, failing to fully inhabit the presidential hopefuls as well as the Machiavellians operating behind them.

Of course, they're often the more intriguing figures. Yet "Ides" isn't a movie about human nature or even political natures as much as it is about double-dealing natures, ones that will keep you guessing while the movie doles out insights about the unscrupulous politics of political campaigning. "This is a win-win situation for me," the unctuous Duffy says at the moment of his apparent victory. Maybe. It is for us. (R) 102 min. S

The Ides of March