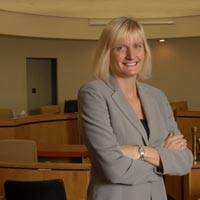 It's never fun to go to the principal's office. It's even stranger and less fun when you're there to describe the nature of a threat made on your children by a disgruntled convict who was on the receiving end of the justice you've helped dole out.

Nancy Oglesby, deputy commonwealth's attorney for Goochland County, has found herself in just that position. She says the satisfaction of helping right a wrong is worth the stress and potential danger. In her office, she comes across the most stomach-churning kinds of wrong: She helps handle the county's domestic violence and sexual assault cases.

Those areas are emotionally difficult, but because the crimes are extremely personal and often between people who know each other or have a relationship, it can be tricky to keep victims engaged as witnesses for the prosecution. But Oglesby's considered an expert in finding strategies to array evidence and move a case forward even if a victim is unwilling or scared to testify.

She proved her mettle early on, recalls Goochland County Sheriff James Agnew. One of her first cases involved a 4-year-old girl who was molested by a TV repairman. She got a strong conviction against the defendant, but didn't stop there. She continued to work closely with Delegate Bill Janis to get two new laws on the books that make life tough for sex offenders.

She makes sure victims have a voice, even if they've been scared into keeping their mouths shut.