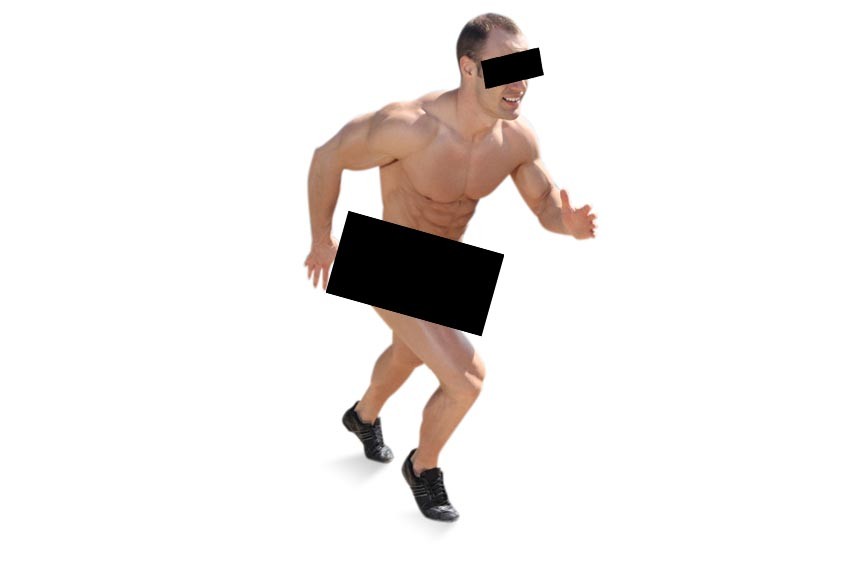 He's lewd and he's nude — except for his running shoes.

A naked jogger has been haunting the Boulevard in the Fan for at least five years, witnesses say. "He's always been jovial as he jogged on by," one Boulevard resident says, although he was a little more aggressive during his most recent appearance.

That resident, who didn't want her name published, last saw him on the Boulevard south of Cary Street late on the night of Aug. 19. The naked jogger approached her and verbally harassed her, the resident says. She told him she would call the police if he didn't leave, and he ran off.

"He always does the same thing," says the woman, who's seen him three times in the last five years. First, the jogger claims his girlfriend bet him that he wouldn't run naked in the streets. "Then he'll just shake himself back and forth," she says, and make lewd comments.

He's a white male with dark hair, on the thin side, who appears to be in his late 20s or early 30s — "old enough to know better," the woman says. (She doesn't believe he's the same naked man who was attacked outside of Star-lite Dining & Lounge in the early morning of July 25.)

Besides the verbal harassment, he's a friendly guy, says Stephanie Thompson, another Boulevard resident who's seen the naked jogger several times. One time he was chatting with Thompson and her friends when he suddenly ran away and returned 20 minutes later, still nude, with a six-pack of Pabst Blue Ribbon. "This is for your trouble," he said. "Sorry I was naked." Another time, she offered him a beer. Naked, he stood with her friends and drank it. "He doesn't seem like a creeper to me," Thompson says.

Nevertheless, it's not a good idea to interact with people like the naked jogger, says Tina Buck, president of Guardian Angel Protection and a former Virginia Commonwealth University police captain. "When we go along with his program ... we're feeding into his sickness," she says.

Don't stop and talk to him, Buck says — just call 911: "It won't be hard to give a really good description. No pun intended."

It's difficult to say if anyone has reported the naked jogger, Richmond police spokesman Gene Lepley says: "We get calls like that all the time." — Melissa Scott Sinclair