Mystery with a Twist

Swift Creek Mill’s “The Mystery of Edwin Drood,” based on Charles Dickens’ final novel, is a metatheatrical comedy delight. 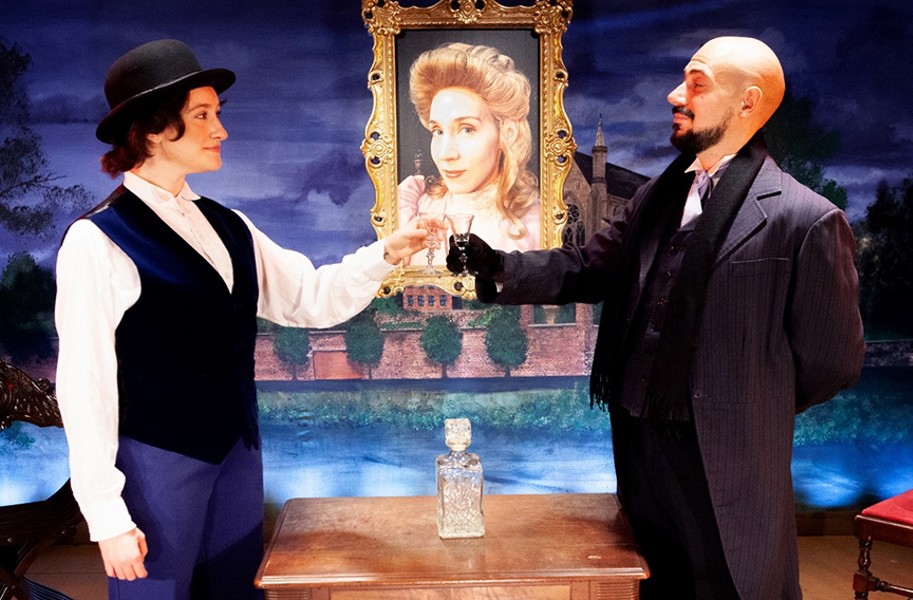 Edwin Drood has gone missing, and the town of Cloisterham is full of likely suspects. There’s his uncle, John Jasper, an opium addict whose secret love for Rosa Bud, Drood’s erstwhile fiancee, could easily have driven him to murder. Then there’s Neville Landless, a student visiting from some vague faraway land, whose mutual dislike for Drood is apparent to everyone. But there’s also something suspicious about that new fellow, Dick Datchery, whose appearance in town seems to coincide with Drood’s disappearance.
Which of these shady characters might carry the secret to Edwin Drood’s whereabouts?

When it comes to the Rupert Holmes musical comedy “The Mystery of Edwin Drood,” it’s up to the audience to decide. The play, based on Charles Dickens’ final, unfinished novel, allows audiences to choose their own whodunit, voting for their favorite villain by a show of hands. Set in a 19th-century British music hall where actors and actresses vie for the spotlight, encouraging audience participation and attempting to influence the outcome of the plot, the show is also delightfully metatheatrical.

It’s also an excellent musical, full of memorable show tunes. (A fun fact: In addition to writing the book and music of this show, Rupert Holmes also wrote “The Pina Colada Song.” You know the one.) Some favorite musical numbers from this production include “Perfect Strangers,” “The Wages of Sin,” and “A Man Could Go Quite Mad.”

Gabrielle Maes’ musical direction for this production is fantastic. The orchestra sounded great on opening night. However, there were a few sound design issues: I couldn’t always hear the vocals over the orchestra.

Director Tom Width delivers dynamic scenes, utilizing the entire theater. Actors occupy the stage and the aisles throughout the show. Width handles the humor perfectly and he is in his element with this show. Alissa Pagnotti’s choreography is lively and adds to the humor.

This production also boasts an outstanding cast of triple threat actors who can and do carry off the vocals with aplomb. Michael Gray is perfect in his role as the maniacal John Jasper, channeling cartoon villains like Snidely Whiplash in his physicality and bringing his powerful, operatic vocals to the musical numbers. Rachel Marrs shines as Edwin Drood, portrayed by female music hall actress Alice Nutting. As Princess Puffer, proprietress of the local opium den, Jacqueline O’Connor is at her very best, leading a singalong and winking her way through a slew of bawdy jokes.

Maura Lynch Cravey’s costumes evoke the era effectively, as does Width’s excellent set. The proscenium arch behind the proscenium arch perfectly illustrates the metatextuality of this show within a show, and it allows ensemble members to watch along with the audience, keeping multiple layers of the story right there onstage at all times. The bright colors of the hand-painted curtain draw the eye in right away, and there are some cool effects like the bed in the opium den that allows a succubus to rise from the sheets.

Swift Creek Mill’s “The Mystery of Edwin Drood” is a delight, bringing suspense and a lot of fun to audiences this holiday season. It’s a mystery with a twist, a metatheatrical comedy about the backstage dynamics of a troupe of actors, and a satisfying musical with all the necessary talent to back it up. With a Christmas Eve meal as an important scene, this show is also a perfect holiday diversion for families and friends to enjoy.