A buried Church Hill legend gets its own concept album. 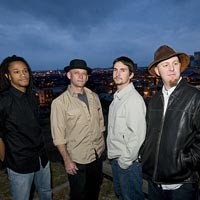 When Jim O'Ferrell wanted a concept for his Americana band's second album, he needed only to look beneath his feet.

Buried within his Church Hill neighborhood are the remnants of one of Richmond's most storied legends: Locomotive 231, entombed in a brick-sealed, water-filled tunnel beneath Jefferson Park. A tunnel collapse in 1925 killed at least three men working to widen the 4,000-foot tunnel, including the recovered bodies of the engineer and boilerman. Rather than dig out the remains, authorities sealed the tunnel, which became a source of numerous urban legends — from buried passengers and day laborers to a Richmond vampire, no less.

Now it's getting its first rock album, the Jim O'Ferrell Band's “Two Thirty One,” which recounts the historical story through different perspectives.

“The songs just sort of wrote themselves once we started,” O'Ferrell says. “What we did was try to maintain historical integrity, not so much propagate an urban legend.”

The opening track, “Wheels,” is written from the perspective of the train itself; there's another from the view of engineer Thomas J. Mason, alleged to have died with his hand on the throttle; and an “American Pie”-style song recounts memorable events from 1925 such as the swearing-in of Calvin Coolidge and the Scopes Monkey Trial.

One of O'Ferrell's favorites is “Wandered,” a brooding '70s-style rocker (streaming on the band's MySpace page) told from the perspective of Mason's grown son, looking back at life without his father.

A career military veteran, O'Ferrell connected with the song personally because he endured two tours of Iraq while raising his three sons as a single father. “I came across quite a bit of trauma overseas — the loss of soldiers,” he says. “And this sort of created a window, if you will, where I didn't feel like I was intruding on the Mason event.”

An Alexandria native, O'Ferrell returned from Iraq in 2008 as an infantry first sergeant and formed a full-time band of diverse musicians, recording an album of songs he wrote overseas. The album received some radio play and charted with the Americana Music Association. He hopes a big launch for “Two Thirty One” will help it reach a wider audience. “We've got an interesting guest list, promoters coming from Nashville. … I even sent an invite to Mayor [Dwight] Jones,” he says.

Drummer Ian Puckett, who adds a '90s rock style, grew up in Richmond and has heard plenty “tunnel of death” rumors, but he really dug into researching the topic. “Growing up here,” he says, “you kind of become a history buff.”

In 2006 a feasibility study was conducted for a video excavation of the tunnel — and there was reported interest from The History Channel — but funding, permit issues and city worries about the stability of the hill halted the project, according to Frances Pollard, chief librarian at the Virginia Historical Society.

Some have said they would prefer the legend stay just that. Being buried under water all these years means there's not much left to find anyway, right?

“If there are souls there, perhaps it's best to leave it undisturbed and sacred,” O'Ferrell says. “But my curiosity is still there.” S

The Jim O'Ferrell Band holds an album release party Saturday, March 20, in the Club Room at Echo Recording Studios from 8 to 11 p.m. Tickets are $15. The band also plays The Camel March 22.