Midlothian transplant Josh Pachter is an editor to mystery writers around the world. 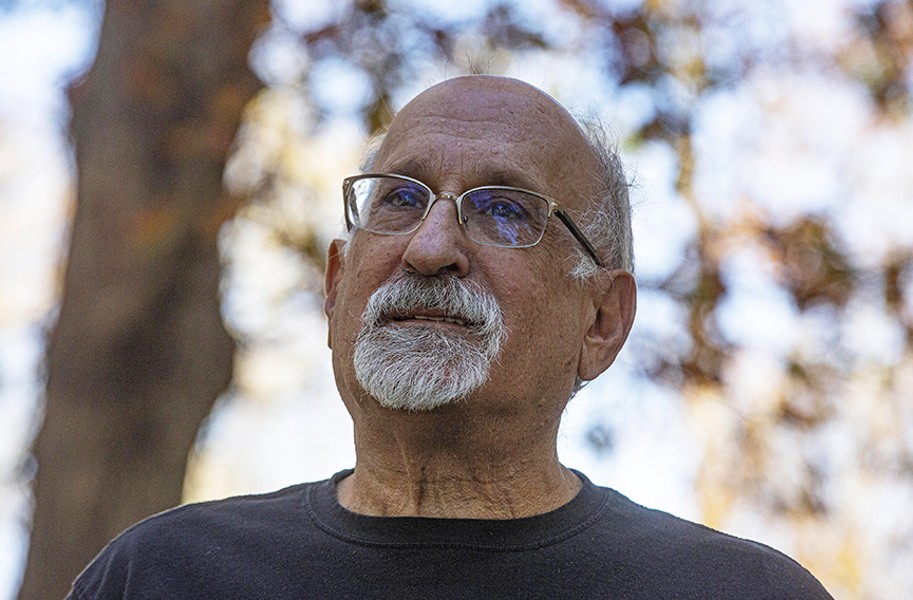 Josh Pachter, who grew up on Long Island, entered the world of crime fiction at 16 when he sold his first story to Ellery Queen Mystery Magazine. It was late 1968 and the teenager immediately joined the Mystery Writers of America, a group that met monthly at Manhattan’s Hotel Seville.

There he met some of the day’s most renowned mystery writers – Edward D. Hoch, William Brittain, John Lutz and Stanley Cohen – who took him under their collective wing and encouraged his writing. When Pachter attended the Edgar Allan Poe awards in 1970, he expected to be seated at the back of the vast Essex House ballroom.

“I was just a punk kid with one publication to his name,” he says. Instead, Hoch had him moved to his own honored table at the front.

Now more than fifty years later it is Pachter, a recent Midlothian arrival, who serves as editor and advisor for mystery writers worldwide. He has developed the themes and edited nearly a dozen crime fiction anthologies, with three more slated for 2021.

His “The Beat of Black Wings” anthology, released in 2020, features 26 short pieces of crime fiction inspired by the songs of Joni Mitchell. These include “Big Yellow Taxi” by mystery novelist Kathryn O'Sullivan and “River” by Ellery Queen's 2019 reader’s choice winner Stacy Woodson. Some of the pieces are lighthearted, others dark and foreboding. All mix the words and images of Mitchell, who turned 77 this year, with the authors’ own literary visions.

This fall Pachter welcomed 13 of his Joni Mitchell collaborators, from as far away as the United Kingdom, to discuss their writing at University of Richmond's Osher Lifelong Learning Center. The seminar ranged from Mitchell’s imagery to the authors’ thoughts on where stories come from, how they are structured and what ingredients make for good dialogue.

Pachter can assemble such a panoply of noir writers because he as much entrepreneur as artist. He graduated from the University of Michigan with undergraduate and graduate degrees in communication and lived overseas for years, teaching in military schools. Since his return, he has taught communication at junior colleges, specializing in film history and mass communication.

But it is crime fiction for which Pachter has a worldwide reputation. Most recently, he has was won the 2019 Derringer Award for his story “The Two Body Problem,” and in 2018 he received second place in the Ellery Queen Reader’s Choice Awards for his story “50,” based on the original piece he wrote for the magazine in 1968. In addition to roughly 100 published crime tales, he has edited 11 crime anthologies, some riffing on crime fiction icons Nero Wolfe and Ellery Queen. Also, he is a highly praised noir translator – mostly Dutch, but also Flemish, Italian and Spanish – allowing him to introduce the world’s crime authors to English-speaking audiences.

Pachter came upon the Joni Mitchell collaboration idea as he began writing a story based on Mitchell’s song “The Beat of Black Wings” and its character Killer Kyle, a disturbed Vietnam veteran. He felt that Mitchell’s evocative images, recorded in 17 studio albums over four decades, could inspire other crime fiction writers. “I always set these bizarre goals for myself, as motivation,” Pachter admits.

Publishers have liked the song-inspired collaborative concept so much they have green-lighted two more Pachter-led projects for 2021 based on the songs of Jimmy Buffett and Billy Joel.

Pachter says his own career did not kick into high gear until he met his wife Laurie, a nonfiction writer, in 2007. Both were disgruntled Match.com subscribers, giving the dating app one last shot. Their first conversation was positive, there was a physical attraction, but then a big problem surfaced: Laurie had a dog. Pachter told her told about his severe pet allergies and begged off. Laurie responded, “but what if we are otherwise perfect?” He reluctantly agreed to meet, so long as there was no dog involved.

When he picked her up, her enthusiastic collie-terrier mix broke free of restraint and warmly greeted Josh, who now expected the date would include an unscheduled stop at the emergency room. But, medically, nothing happened. Was it a case of divine intervention or just unmasked hypochondria? It remains a mystery. However, the couple with Tessa the affectionate, non-hypoallergenic mixed breed, lived happily ever after and turned their courtship saga into a murder mystery for the Saturday Evening Post.

Pachter says his wife’s inspiration and organizational skills have spurred a boom in his productivity. He’s published more stories in the 13 years since he met her than in the 40 years prior. Now, more than 50 years after New York’s mystery writers helped launch his career, Pachter is providing opportunities for crime writers around the world through anthologies like “The Beat of Black Wings.”

Mitchell, who was disabled by a brain aneurysm in 2015 and is slowly recovering, has neither opposed nor endorsed the effort. However, in her honor, the “Black Wings” authors are donating one-third of their royalties to the Brain Aneurysm Foundation. Pachter’s Jimmy Buffett and Billy Joel crime fiction anthologies will make similar contributions to charities tied to those artists.

One other Pachter project is on the horizon. He has inked a deal to produce a crime fiction anthology inspired by the Marx Brothers films. Pachter has just finished writing the title piece, “Monkey Business,” about a diamond heist during the movie’s trans-Atlantic cruise.

About a year short of professional retirement, Pachter continues to teach remotely at Northern Virginia Community College but is happy to have moved to Richmond for the recreational opportunities (he and Laurie are avid kayakers) and the stress reduction.

“For retirement, we looked at Savannah and Greenville, but then had dinner with some friends on the way through Richmond. We watched the sun set on the Swift Creek Reservoir and said, ‘This is it.’”