Discover the ancient, sunken treasures of once forsaken Egyptian cities at VMFA. 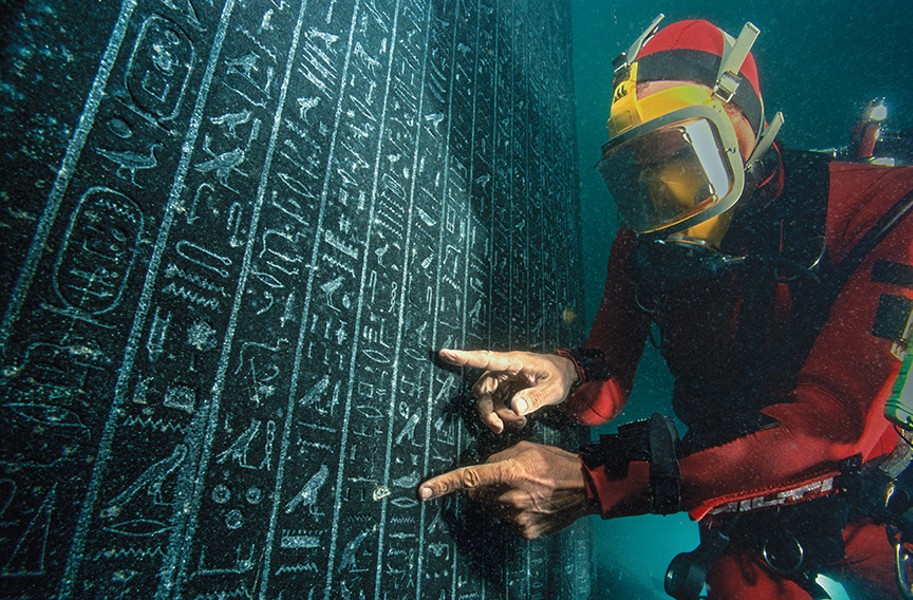 Christoph Gerigk © Franck Goddio/Hilti Foundation An archaeologist checks the stele of Thonis-Heracleion raised under water on site in the city of Heracleion.

It’s almost 10 a.m. and the Virginia Museum of Fine Arts’ curator of ancient art is making introductions. “This is Hapy.He’s the god of fertility and has an offering in his hand – I like to think of it as him offering our visitors a chance to visit ancient Egypt.”

Weighing in at 5.6 tons and standing 17 feet tall, Hapy is an imposing figure, one of more than 200 ancient artifacts discovered at the bottom of Aboukir Bay. These artifacts – the result of the European Institute of Underwater Archeology’s excavation led by French archeologist Frank Goddio – have been on a global tour, making stops in France, Great Britain, Switzerland, and, most recently, California. This will be the exhibition’s last stop in the U.S.

As we make our way down into the gallery – it’s cool and dark, immediately cuing thoughts of underwater – Schertz explains that “Treasures of Ancient Egypt: Sunken Cities” is divided thematically into time, place, belief and practice.

The timeline puts us smack dab in the middle of the Late Period (the seventh to fourth centuries B.C.) and the Ptolemaic Dynasty (305-31 B.C.). For us history laymen, that’s about 2,000 years after the building of the pyramids and 2,000 years before today.

It’s a time of great change, as Egyptian and Grecian civilizations merged socially and politically. One of the first salient objects we come upon in the gallery is a granodiorite statue depicting a queen dressed as the Egyptian god Isis. “This is a fascinating period, and one of the most fascinating aspects is how artistic conventions of Greece and Egypt are combined,” Schertz says.

Our unnamed queen is standing in the stiff, traditional pose of Egyptians, symbolizing stability eternal. Her hands grasp at her side, her left foot is set slightly in front of her right. She gazes straight ahead, steady and certain. But her hairstyle is Greek. 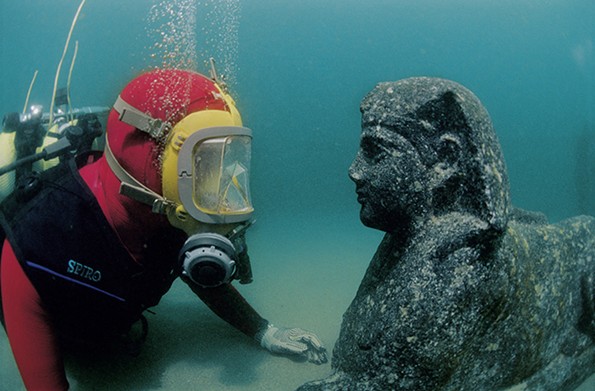 When Goddio went in search of these artifacts two decades ago, he believed he was going to discover three ancient port cities off Egypt’s north coast, all of which had “pretty much disappeared from the historical record.” Instead, he found only two: Thonis-Heracleion and Canopus. “Thonis is the Egyptian name and Heracleion is the Greek name,” Schertz says. “I tell people he had his workload cut by one-third.”

These once sunken objects are in incredible condition, a result of the Nile Delta and its proclivity for creating unstable land masses. “All that soil and silt that flow [in the river] means there is so much dirt, so when things fall into the water, they get covered up quickly,” Schertz says. “They’re preserved in an anaerobic environment, so no critters.”

The gold coins and jewelry and gilded statuettes are both lovely and important – they’re indicative of a very global, cosmopolitan market. As we move through the gallery, from place to belief, Schertz explains how many of these encased objects were found in temples, which means Persians and Greeks and other Mediterranean sojourners would pay homage to local Egyptian gods, leaving offerings at these sacred places.

“These are from the wealthy island of Cypress,” Schertz says, pointing to a few finely detailed, shiny gold coins that were discovered among the remains of an Egyptian temple. “But the gold has been tested and it comes from Egypt. We estimate tons and tons of gold was being exported from Egypt to the rest of the Mediterranean – then coming back to Egypt.” 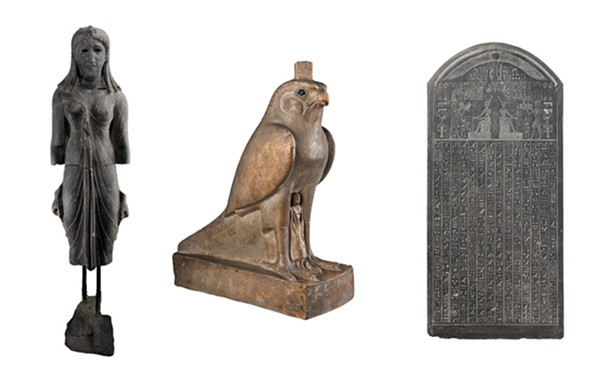 The Egyptian belief system, as most religious structures are, was the indelible foundation for most of daily life. Gods were created and celebrated, worshipped and feared. One god, though, was especially revered by Thonis-Heracleion and Canopus denizens during this time.

A significant portion of the exhibition is dedicated to Osiris, the Egyptian god of fertility and the afterlife. After Osiris’ jealous brother, Seth, cuts him into 14 pieces and scatters his remains across the world, Osiris’ wife (and sister) Isis journeys to find them. She gathers his broken body and wraps it in linens – the mythological source of the first mummy. Isis becomes a bird of prey, and beats life back into his body. Osiris impregnates her, then recedes into the Egyptian netherworld.

Each year, the Mysteries of Osiris festival celebrated this rebirth. Thousands and thousands of people would line the banks of the Nile as a maritime procession carried Osiris images down the river. These images were made with silk from the Nile and barley seeds, forming a mummy of the god, which was then put into gold molds. The images were watered with the sacred water of the river. If the seeds sprouted, that would be a harbinger of a good crop year.

“Because he is restored to life, Osiris becomes associated with fertility and regeneration,” Schertz says. “Egyptians see cycles everywhere – in the Egyptian mind it’s the paradigm of the universe. The sun rises and gives us light, then day dies and turns to night. The Nile floods every year and deposits soil, crops grow, you harvest them, the land goes fallow. And night and day starts all over again.”

“Treasures of Ancient Egypt: Sunken Cities” is organized by the European Institute for Underwater Archaeology with the support of the Hilti Foundation and with the Egyptian Ministry of Antiquities. The exhibition is open during museum hours. Tickets cost $10-$20. Visitors are encouraged to make reservations online. reservations.vmfa.museum.