“Liquid Sky” director Slava Tsukerman on making one of the strangest feminist films of the 1980s.

An early 1980s cult film like no other, "Liquid Sky" is one of those movies that some people hate while others will say it changed their life.

A psychosexual sci-fi comedy, the movie is set in New York between the peak of the No Wave music scene and the start of the AIDS epidemic. The cast is filled with gender fluid characters, unusual dialogue such as a protagonist who says stuff like, “I kill with my cunt," while the scenes are recognizable for their stylish, color-gel saturated look that was well ahead of its time. (Reportedly, artist Keith Haring was originally scheduled to create the sets.) The costumes by Russian Marina Levikova had an immediate influence on fashion, and the minimalist soundtrack inspired trends in electronic music. Not bad for a relatively inexpensive little cult film made by a pair of recent transplants from Russia.

The strange plot revolves around a New Yorker played by Anne Carlisle, who sports an androgynous, New Wave look that almost certainly inspired ’Til Tuesday’s Aimee Mann (who grew up in Bon Air). Carlisle, who plays Margaret as well as a male character named Jimmy, is raped by various men in the movie who are, in turn, killed during their sexual climax by an alien ship from above. Or more specifically, paper dinner plates that hover above Margaret's drug den apartment. The aliens came for heroin from the Greenwich Village club kids, but found brain chemicals released during orgasm to be a better high ... or something like that.

In New York, “Liquid Sky” ran for four years at the Waverly Theater (now IFC) and was the most successful indie film of 1983; it was also very popular during its Richmond run at the former Biograph Theater. The movie was directed by Slava Tsukerman, a Russian Jewish filmmaker who emigrated with his wife, Nina Kerova, who helped write the film with Carlisle and Tsukerman. Amazingly, "Liquid Sky" remains a cult classic today, having been rediscovered on Blu-ray and DVD. It still holds a 95% rating on Rotten Tomatoes, an impressive feat if you've ever seen the movie.

Style spoke with Tsukerman, who has been working on “Liquid Sky 2” for a few years now, from his home in New York. His English was a little rough and the connection not so great, but we did our best with the transcription. The interview is edited for clarity.

Style Weekly: One of the first things you notice about this film is the minimalistic synth soundtrack. How did you compose this and what influenced you?

Slava Tsukerman: Well there were no influences really, because I had a strong idea what music I want. I wanted something primitive, electronic, which would sound like circus music. Like Fellini’s films, not traditional; completely electronic, mechanical. I tried to find electronic composers to do it and I still have a big box of demo tapes. But I couldn’t get what I wanted from them. … I found a machine from a company called Public Access Synthesizer who would teach musicians to use their computer. … I love music all my life but never learned it. So they helped me feed music into the computer. I knew very well what I wanted [laughs].

You’ve called the movie an “anti-fairytale,” did you also think of it as a feminist film?

Yes, I had in mind classic Hollywood stories like "Cinderella," but my model of Cinderella couldn’t find her Prince Charming, or only from outer space. Already the Spielberg film, “Close Encounters,” was made and there was already this feeling that people had lost their hopes to find heroes and were expecting something from outer space. So I took a semi-radical approach to this idea. I wanted to put all religions and myths of the time together. 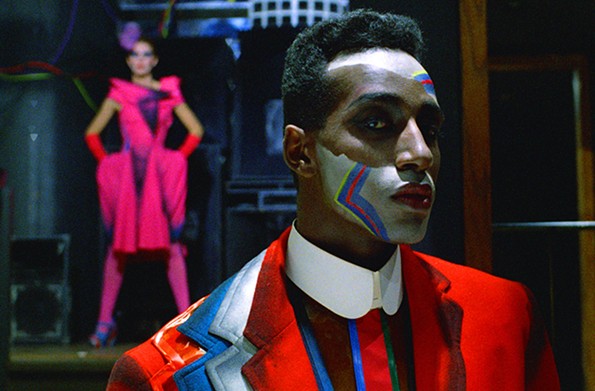 There is an early montage quality to “Liquid Sky,” was that from your film education in Russia?

Well yes, I got it from my teacher Lev Kuleshov, who was a teacher of Eisenstein. I did not have much money, so I needed to use maximum artistic knowledge. … Before “Liquid Sky,” we had different science fiction low-budget project in development [“Sweet Sixteen”]. Casting director Bob Brady had a big group of students, Anne Carlisle was one of them. That film never happened. The production said there was no way the script could be made for half million, which is what our investor was prepared to spend. So I had to find another film.

Anne started working with my wife, who needed help from someone good in English to work on the script. My wife had been working on a script about a woman who cannot reach orgasm.

I read somewhere that early on, you could not get into film school in Russia?

At this time in Russia, there was only one film institute where all the famous filmmakers were teachers and they had departments. For directors’ department, they were taking about 15 students a year from entire Soviet Union, Europe, Africa. It was a very anti-Semitic time, though many of the professors were Jews. …

My parents and I wanted a higher education, so I studied architecture and construction engineering for many reasons, but one was because that’s the education Eisenstein had. … I made my first 35mm short [“I Believe in Spring”] which won first prize at a Russian national festival of amateur film and was released in theaters. I believe this was first Russian independent film released, back then they called it amateur, but there was nothing amateur about it. This was 35mm film. At that moment, you could not buy a good quality 16mm camera in Russia.

After that, I became a student at film school. When you finished school you couldn’t choose your job. They wanted us to work on science documentaries and educational films. I was sent to Moscow studio and I started doing films there that was a mix of genres and even used the biggest stars in Russia.

How do you view independent cinema today?

It’s much easier because of digitization, shooting is much easier. Much more people make films. Everyone has a pencil to write a book, but not everyone can write a novel. A good novel is even more difficult.

What do you tell young people who want to make films these days?

There’s nothing new about that, that’s always been the same. It’s very difficult. Only the people who really want it and are ready to sacrifice everything. A lot of talented people don’t manage to do it. In my life, I know more people who became successful without talent, but persistence.

What is the current status of “Liquid Sky 2”?

We’re still working on this, I hope we’ll make it. I’m not very good with raising money, I hate this process. Anne Carlisle is going to be involved. We are now writing script together. Margaret is coming back to New York.


Back to the Film Issue