Special/Signature Issues » We've Got the Music In Us

The Camel proves to be a different kind of animal. 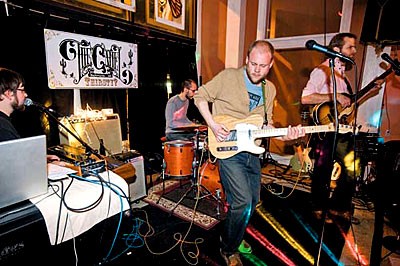 Talk about the elephant … er, camel in the room.

Many wonder, but few ask, “Where'd they get a name like the Camel?” Let's face it, naming a music venue after a spit-slinging beast of burden that's less than easy on the eyes might seem like a marketing shot in the foot and to some, downright goofy. But the more you learn about this snug spot on West Broad Street, the more suiting the peculiar name. It's like nothing else in Richmond and it's survived the sometimes-fickle scene.  The plaid and bearded Pabst Blue Ribbon-chugging indie rockers flock to it, but so do older folks who dig jazz and red wine.

This Richmond social oasis boasts a smorgasbord of community events and shows, and has gotten rave reviews from The New York Times as well as an inexplicable visit from Carl Spackler himself, Bill Murray, in May. Turns out, that bump-backed critter on the door isn't stopping anyone from checking out one of the city's most finely tuned establishments.

Owner Rand Burgess says that despite the push from some folks to change the name when he acquired the business in July 2008, he stuck with its original moniker. “The Camel has pretty good branding in the booking world — we're known.” Burgess says.  “The original owners lived above the Camel and had this dream of creating a community gathering space and originally were going to call it the Fusion CafAc, but that already existed downtown. So, because camels can go a long time without water and survive and it took them forever to build the place, but they made it, they went with that.”

Along with the name, a handful of things stayed the same. But Burgess intently focused on the music. “It started in March 2007 as more of a coffee shop with good ideas,” he says, “but less of an emphasis on bands. It didn't have a stage or anything and a lot of borrowed equipment. I looked at what worked and what didn't work and built around that. I really liked the concept of doing things for the community and we still do that, lots of fundraisers for various organizations. But now we have live music every night.” Structurally, the place is perfectly poised for excellent sound with its sloping floors and a partition that separates an intimate performance from the din of the adjoining bar.

The 27-year-old also prides himself on what he calls “supporting the growth of local,” so it's fitting that Burgess shares space with indie station WRIR, whose DJs often come downstairs to enjoy some of the local beers on tap. “We love WRIR,” he says. “When we first started, there were some issues because sometimes the DJs couldn't talk on the radio because of how loud the Camel was. But they've worked around us and us around them.” The Camel added sound treatments; WRIR added insulated, soundproof rooms. There's also the potential for WRIR to air live performances from the Camel stage in the future, Burgess says.

One regular you'd likely hear on those broadcasts would be Jonathan Vassar. The pastoral picker credits the Camel with rekindling his spark for playing out and about. “The first show I saw there was David Shultz and the Skyline, Paleface and Mermaid Skeletons,” Vassar says. “There were a ton of people out, a great vibe, and everything felt right. It got me really excited about playing music in Richmond again.

Vassar, who's played more than 20 shows at the venue since 2008, says all of his CD release parties have been at the Camel, and “the crew always makes sure the performers are taken care of.” He intends to keep the tradition going.

A peek at the calendar suggests that many other locals keep a regular gig at the spot too, including the ever-funky No BS Brass Band and twangers Jackass Flats. “It feels like home,” Vassar says. “It's the most comfortable venue for us to play, period. It feels like we're playing a show at friggin' ‘Cheers.' Everybody does know our name.” Then a thought occurs: “Wait ... does that make Rand Ted Danson?”

Perhaps. Burgess sums up success in a simple phrase: “Any month that we can pay rent, buy beer and directly reinvest in the place is a good month.” What's more, he adds, “We're not even a finished product yet.”

For information on the Camel, go to www.thecamel.org.

We've Got the Music In Us