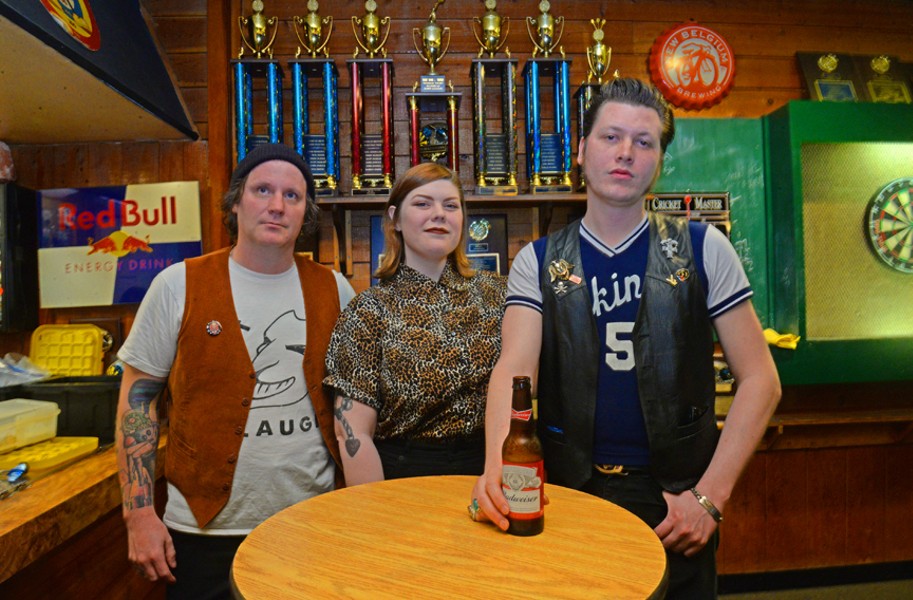 Scott Elmquist Cruzer is Michael Cipollone on guitar and vocals, Caitlin “Squaits” Noone on bass and vocals and Paul Kirk on drums.

Cruzer plays a lot of dive bars. The band members feel comfortable in them.

The trio consists of Michael Cipollone on guitar and vocals, Caitlin "Squaits" Noone on bass and vocals, and Paul Kirk on drums. One could describe their heavily spring reverbed music as monolithic, '60s inspired garage rock, with some post-punk, new wave, surf and a little Everly Brothers influence for good measure.

During an afternoon interview at Rock Falls Tavern, members of the trio tell me that, so far today, they've seen an elderly woman flash her breasts on Brookland Park Boulevard and during a break from our interview, a guy puking in the restroom.

Cipollone notes that he wanted to name the band C.O.K.E., but Noone objected.

"The name Cruzer makes me think of 'Apocalypse Now' where they're surfing in a war zone," Kirk says. "Or mutants on skate boards." Fittingly, the artist Pizza Boobs (Gabriel Hollington) designed their T-shirts featuring fishnet legs on a skateboard.

The band unanimously agrees that their drummer is their best guitarist, even though he doesn't play it for them. "As a drummer, I play as simple as I can and try to do things that don't annoy people," says Kirk, who also plays in Sick Bags [see story] as well as an outlaw country band, Old Gun Road.

So what are Cruzer songs about? "Desolation," says Cipollone, a Cincinnati transplant known for his band, Bummer's Eve, though he admits that Noone is starting to take over more songwriting duties. That was his plan from the beginning, he explains, ever since he first noticed that Noone had a great, direct stage presence for someone who had only been playing bass for about five weeks.

"The new songs are post-apocalyptic," Noone says. "Talking about 'Lost in Outer Space,' cults, weird Norse mythology re-imagined in kind of a 'Star Trek' vibe. The inspiration for one of my most recent songs came from my dog, Valkyrie, who was kind of a terror as a puppy."


This isn't an overly serious band. Just touring whenever possible and maybe releasing a full-length album on vinyl one day would be nice, they say. The important thing is that the band members get along and enjoy playing together, especially when hitting the road – which has become harder with their day jobs lately.

Noone works as a debt collector for a bank: "I love my job … collecting on people's credit cards and killing them with kindness." Kirk bartends at Rappahannock Oyster Co. and Cipollone used to work at Hardywood Park Craft Brewery, where his booking of bands like Portland's excellent Jenny Don't and the Spurs didn't go over well. Now he and his wife, Patty Conway, are working on a North Side spot that could bring sweet relief to sad Strange Matter fans (stay tuned to Style).

"Metal, indie music, jazz rock are successful in Richmond," Cipollone notes. "But there's like 30,000 college kids here. I think garage rock maybe isn't as popular as it is in other cities because Richmond kind of gets passed over a lot [by good bands]."

Cruzer recorded its first EP with Adrian Olsen at Montrose, and the most recent EP, the fiery stomping "Holiday," with the young Max Gotessman, who Cipollone hired when he was at Hardywood Park Craft Brewery. The band is going to reissue the new EP on cassette with Mary Key at Steady Sounds and there are also plans for a split 7-inch with the band Paint Fumes from Charlotte, N.C.

When the band takes the stage, nobody is in the spotlight and members say they feel free to be themselves.

"It's not really a thought-up process like some bands have," Cipollone says. "It's more like a hang-out-at-practice type of thing. We're doing this for fun."