Food Review: The food is good and the music is better at Tin Pan Restaurant and Listening Room. 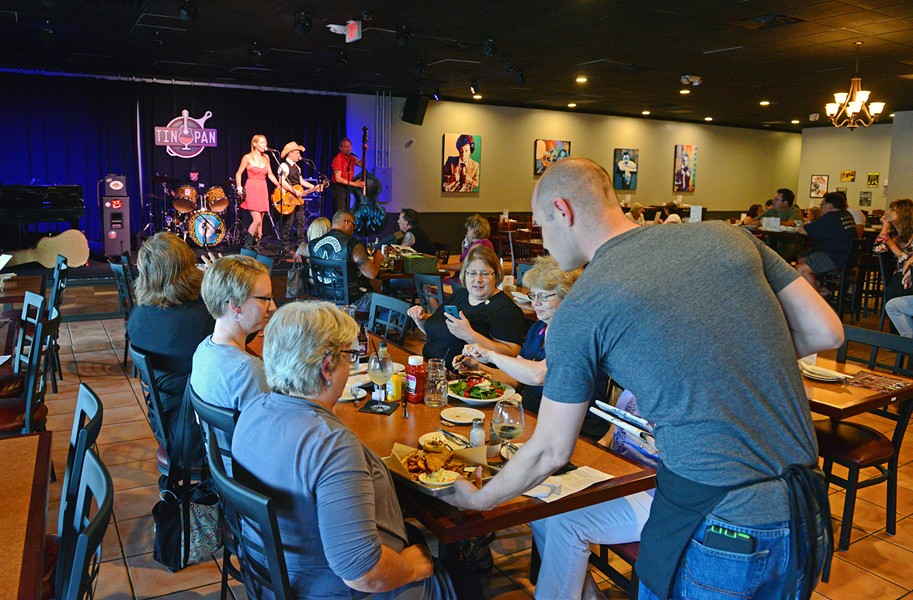 Scott Elmquist Cha Cha’s Cadillac entertains diners at Tin Pan Restaurant and Lounge, where the food is just as important as the music.

Robust as Richmond’s music scene has become, still not on the bill was a commercial listening room such as Alexandria’s Birchmere, where seated patrons are served dinner along with a performance. Sure, a fan could trek to Ashland Coffee and Tea for that combo, but options close-by were nonexistent — until now.

The Tin Pan Restaurant and Listening Room, sitting in the shadow of the dowager Regency Square mall, sets an intimate tone by keeping the audience close, nestled just a few feet from the raised stage and its grand piano. No seat in the music hall is a bad one or very far from the performers, which range from national acts such as twice Grammy-nominated Iris DeMent, country singer Suzy Bogguss and Zydeco legend C.J. Chenier, to regional and local performers.

Unlike the Broadberry, which opens only on show days, Tin Pan offers lunch service and daily hours, presumably an indicator that eating is as much of a focus as listening.

An agreeable meal can be had on the brick patio, although the view offers nothing more stimulating than a parking lot and an endless stream of West End parents shuttling their budding Jack Whites to music lessons at the shop next door. Still, it’s fresh air and a breeze, and Richmond revels in its patios.

Not all starters begin life at the bar. Three cheers for a grilled vegetable plate ($9.95) of mushrooms, squash, carrots and zucchini, made memorable with a bath of balsamic and garlic, so flavorful that the accompanying yogurt dip is almost superfluous. Heat-lovers will heed the call of spicy shrimp and chorizo flatbread ($9.95), which gets an assist from fresh herbs, cheese and red chipotle sauce. Fried shrimp and crispy polenta ($10.95) in lobster gravy aspires to riff on Asian, but comes across as overly breaded and heavy.

Between the bread is where the kitchen shines, evident with the steak sandwich ($11.95) — thin-sliced rib-eye with lettuce, tomato and red pepper aioli, topped with a giant onion ring. But the unexpected highlight is pesto cream cheese. This seemingly small adaptation gives a new dimension to an old standard. Arriving on a metal baking tray, the Angus burger ($10) weighs in with a buttered pretzel roll, a worthy holder for the half-pound of cow and cheese.

Because fans almost always want their music with a side of booze, Tin Pan could be excused if it got lazy on the liquid front — but not bar manager Kevin Lui. The author of “Craft Cocktails at Home: Offbeat Techniques, Contemporary Crowd-Pleasers, and Classics Hacked with Science” makes his own syrups for his simple, but well-executed cocktail list ($9). On tap are four Virginia beers ($5-$6), along with an array of bottles and cans ($4-$9). Drinking local grapes is more problematic because only one Virginia wine, Horton Viognier, graces the wine list ($5-$9 glass, $22-$32 bottle).

Desserts ($7) won’t win any novelty awards, but they’re made in-house, with a towering slice of carrot cake the most winning thanks to a frosting not overly sweet. Layered with both ice cream and whipped cream, the triple chocolate brownie is a teetering finale, but brownie aficionados be warned, this is a dryer, cake-style variety rather than a moist fudgy one.

Service rivals the menu in its variability. One visit, our server is so timid she all but whispers, scurrying off to the kitchen for answers to the most basic questions. But at the almost sold-out Nellie McKay show, our brash server actually pulls out a chair and sits down with us more than once when he wants to discuss the menu or take an order. In true Goldilocks fashion, the third time’s the charm with a savvy server who doesn’t aim to be my BFF.

Tin Pan has its heart in the right place, and Richmond is overdue for a listening room. With some tuning up, the newcomer could make dinner and a show a worthy headliner.

Food and Drink The Tin Pan Restaurant and Listening Room