Record Store Day offers a special release of a legendary concert at Plan 9 Records from 14 years ago. 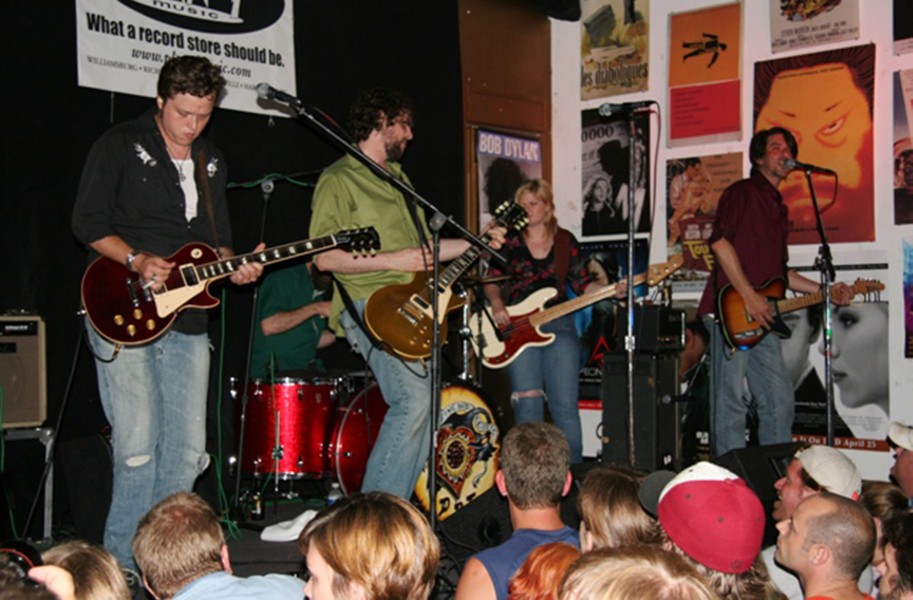 Andy Garrigue Southern rockers the Drive-By Truckers perform for around 200 people at the old Plan 9 location in Carytown in 2006. The cover of its new four-record vinyl set, “Plan 9 Records July 13, 2006” is designed like an old-school bootleg.

In the summer of 2006, the Richmond music scene was still reeling from the tragic murders of the Harvey family.

Plan 9 Records in Carytown held an in-store rock concert to celebrate its 25th anniversary and raise money for the Harvey family memorial endowment – a show that would go down in the history books of that Richmond institution.

The sold-out event for just over two hundred people started at 10 p.m. and raged on for two and half hours, about an hour longer than the band originally planned. Now others will get to hear all its sweaty glory when a four-record vinyl set of the Drive-By Truckers’ “Plan 9 Records July 13, 2006” is released on Record Store Day this Black Friday. It's an album one national music critic is calling the band’s best live recording.

As for its pay that night, the group received a case of Pabst Blue Ribbon and two bottles of whiskey, all of which was consumed by the encore.

Southern rockers from Athens, Georgia, the Truckers have always been warmly embraced by Richmond audiences, so much that the city became a second hometown of sorts. That July, the band took a night off from its national tour opening for the Black Crowes to perform at Plan 9 to help raise money for the Harvey endowment. Patterson Hood, the band’s founder and lead vocalist, had been personally affected by the senseless tragedy, later writing a song about it, “Two Daughters and a Beautiful Wife.”

Listening to the Record Store Day release, you can almost taste the whiskey sweat. The performance has the gritty, sloppy energy of the Rolling Stones in “Exile”-era form and even features a cover of the Stones’ classic “Moonlight Mile.”

As Brandon Reynolds wrote in a Style Weekly review of the concert: “The Truckers gallop[ed] through stories of desperate lives, shotgun blasts, and strange trips through drugs and liquor. … Passing a bottle around the stage, they [were] indeed having a fine time.” According to the article, the Plan 9 show made about $8,000.

National music writer Stephen Deusner, who is authoring a book about the Truckers as part of the American Music Series at the University of Texas Press, says he thinks it’s the band’s best live album.

“You can hear how relieved and excited they are to be playing a real show again, smack-dab in the middle of a miserable tour opening for the Black Crowes," he told Style via email. "You also get that incredible back-and-forth energy with the audience, where the band is playing off the crowd’s excitement and vice versa."

Deusner noted that it was a dark period for the band and Richmond.

“[Guitarist] Jason [Isbell] was already in the throes of addiction, and he’d divorce Shonna [Tucker] and leave the band in the next nine months. … Yet there’s a lot of joy and catharsis in this show, especially in ‘World of Hurt,’ which they’d only just recorded.” Deusner’s still untitled book, which includes a chapter on the band’s Richmond connections, is on track for a fall 2021 release.

Hood told Style that he was initially “pretty skeptical” about revisiting those days, “as they were pretty brutal on a lot of levels for us as a band and as people.” But then he listened to the Plan 9 recording: The show was professionally recorded and mixed by Bill McElroy at Slipped Disc in Ashland.

“I was blown away by how great the recordings and the performances were,” he says. “That was a troubled era for the band, but that was a very special and magical night and I’m thrilled to have such a fantastic document of that era of the band at its best.”

Former Plan 9 General Manager Jay Leavitt, a longtime friend of Hood’s from Alabama who now owns Deep Groove Records in the Fan, remembers the concert as “one of the most special nights of my life.”

The Record Store Day package, which will retail for around $50, is laid out like an old-school illegal bootleg, complete with cheap photocopied jacket images. Inside it contains a color poster for the show by Richmond artist Wes Freed, a copy of an original ticket, and there will be a colored vinyl edition for Richmonders featuring the blue-orange color swirl of World of Mirth, Kathryn Harvey’s beloved children’s toy store still operating next to Plan 9. The set will be available at Plan 9 and Deep Groove on Black Friday. Check their social media for store procedures.

For Plan 9 founder and owner Jim Bland, who encouraged Harvey to open in Carytown and was a partner with her in World of Mirth, the concert still brings up mixed emotions. Bland, former Plan 9 employees Kelly Wilkes and Leavitt were the ones mainly responsible for pulling off the successful concert, and later Bland continued to encourage the band and its label to release the show on vinyl.

“Celebrating our 25th anniversary was a big deal. But everyone was still grieving,” Bland recalls, noting that any profit off the Record Store Day release for Plan 9 will also go to the Harvey fund, as “a final carry-through.”

“It was a raw time, but we’re really proud this is finally going to come out.”


Back to The Holiday Almanac