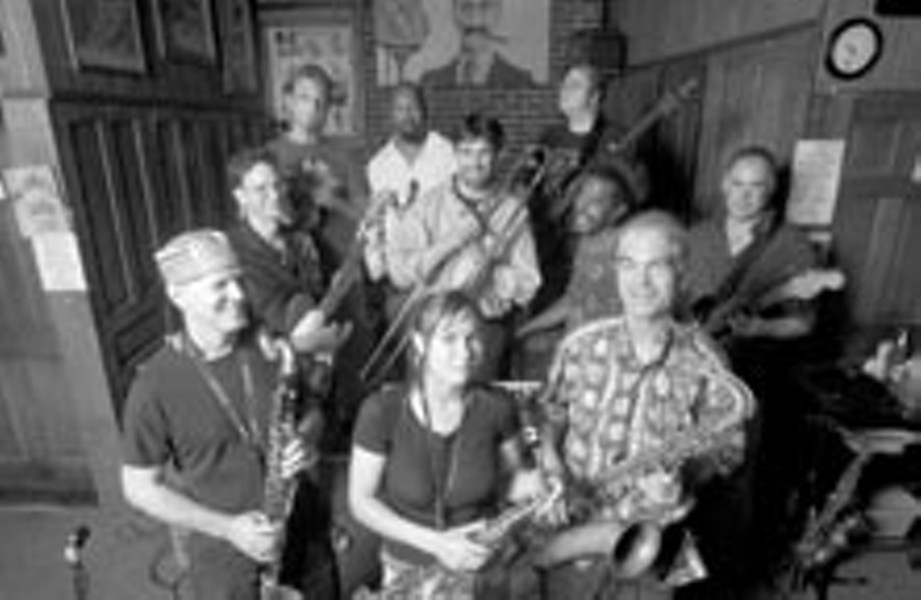 "It's such an incredibly diverse group of people; there's a 40-year age difference between the oldest and youngest," band co-founder Tim Harding says. "Finding that middle ground that offers individuality and opportunity for everyone is wonderfully fun and a neat challenge."

Hotel X came together in 1992, crystallizing around bass duets between Harding and co-founder Ron Curry. Drummer Jim Thompson joined in the first day. Since then, more than 50 players have moved through the ever-evolving lineup. The band has released seven CDs. And this month it will receive a Theresa Pollak Prize by Richmond Magazine for excellence in the arts.

Harding speaks as he plays, in a cheerful torrent of eclectic knowledge and free association. "It's the bane of the Eurocentric experience to explain everything away," he says, proceeding to triangulate his band's approach with references to everyone from Satchmo to Schopenhauer, from Nigerian Fela Kuti to '70s Scottish soul rockers The Average White Band.

Six of the band's recordings were on the seminal punk label SST, but whereas "punk/jazz" bands like the Lounge Lizards tended toward wiseass irony, Hotel X was a true believer. Its hero was the controversial innovator Ornette Coleman, whose "harmolodic" approach rejected established musical convention and whose '70s-'90s band, Prime Time, was the gold standard in free-funk improvisation.

Curry sees his band's late-'90s movement into world music as a logical progression. "A lot of the sensibility, the naturalness, is the same as Prime Time," he says. "Of course we used to have more complex arrangements. Now we are more focused on the groove."

Simplicity is not simple-mindedness. Hotel X's central inspiration is African music, a virtually bottomless well of polyrhythmic sophistication and folk universality. If earlier incarnations of the band reveled in raw intensity, disdaining bourgeois notions of technique and tone, the new music, while retaining the churning undercurrents, has a less jagged surface.

Onstage at Bogart's — the room now full and the full band assembled — the appeal is obvious. The arrangements are tight but not constricting. And the occasional tart bits of abstract expressionism are blended with an almost conventional sweetness.

People are even starting to dance. "This big band has gained a momentum of its own," Curry says. "It speaks to people in a way that a quartet cannot."

"As we get older, we appreciate age more," Harding says. "Our culture loves the explosive nature of youthful vibrancy, the dazzle, glimmer and glitz. But youth is fleeting and ill-informed. When you are 20, it is all gut — action and reaction. When you're 70, the subtlest gesture can speak worlds."

Hotel X's movement from soaring, youthful iconoclasm to seasoned respect for the depths of traditions isn't really a new story. Then again, the best stories are seldom really new. S