Music Is Not Wallpaper

Guitarist Dweezil Zappa gets wrapped in his father's legacy. 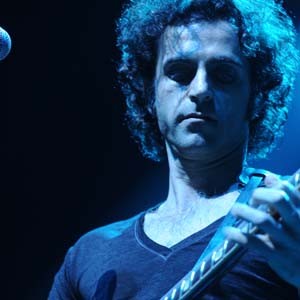 Frank Zappa fans are hard-core. Five years ago, when guitarist Dweezil Zappa began touring as Zappa Plays Zappa, playing note-for-note versions of his father's classics as well as more obscure compositions, he knew he was in for a challenge.

“The goal was to present the music so core fans could see it again while exposing younger generations to it,” says Zappa, 40. “To hear it played live confronts you with the fact that people had to spend a lot of time to learn that. You don't see that much these days. As Frank said in the early '80s, ‘Music has become wallpaper for people's lifestyles,' and it's just so degraded at this point, people don't even pay for it.”

The younger Zappa is earning widespread critical kudos for being better than just another tribute band; last year, he and his group won a Grammy for best rock instrumental with the classic 1969 piece “Peaches en Regalia.”

“Most popular live shows are like Broadway for kids, a pantomime … brand-specific and geared towards something homogenized,” Zappa continues. “Frank called his music ‘the world's finest optional entertainment' and that tradition needs to be carried on.”

So how has his understanding of his dad's guitar playing changed?

“He was a drummer who played guitar, so the rhythmic ideas drive what he's doing,” he says. “The sounds he uses really make the playing stand out. Adjusting to playing in context to that was a big challenge. I wanted to make sure when I was playing solos that the song didn't take a left turn or sound like a different band, so I learned a lot of his idiosyncrasies, licks and sounds. … There are times when I listen back and go, ‘I don't even know that I played that.' It's him jumping out.”

He says the band is debuting newly played material on this tour, such as “Big Swifty” from 1972, thanks to an additional keyboard player, Chris Norton, who auditioned for the group through its Web site. “Same as in Frank's band,” Zappa says “He would play material arranged for what he could do best with the band.”

An early MTV video jockey who grew up in the Hollywood scene dating Molly Ringwald during the filming of “Pretty in Pink,” Zappa has tried acting before but says it isn't something he actively pursues. “This takes all of my time to learn this stuff or maintain what we know,” he says. “I can't even listen to other music.”

Two months divorced from fashion stylist Lauren Knudsen, he's throwing everything into his dad's music. The band recently released a live album, “Return of The Son Of …” and Zappa says he may write original music because of fan demand.

“It wasn't my intention,” he says. “But people have really adopted the band.”

Here is more from Style's interview with Dweezil Zappa:

Style Weekly: Apart from the technical virtuosity of Frank's playing, I always appreciated his emotion—it felt to me sometimes like barely controlled rage.

Zappa: His guitar playing is unique to him … what you are saying about him having wreckless abandon, or barely controlled rage, I totally hear that in his playing. It's this thing of ‘I'm just gonna go for it, and it doesn't matter what happens.” It's the intent behind the note, how you hit the note, not so much the note itself.

Even when he's playing straight blues, like in his version of “Baby Please Don't Go” with John Lennon and Yoko Ono—he really murders it.

Yeah, his blues guitar playing is so underrated. That is where he just completely tears it up. There's a record we put out called “Frank Zappa Plays the Music of Frank Zappa: A Memorial” that took his most iconic guitar instrumentals--“Zoot Allures,” “Black Napkins” and Watermelon in Easter Hay”--and presented them in various versions. We found the earliest versions and showed how they were developed into the ones that were released. There's one bonus track called “Merely a Blues in ‘A'” where instead of doing a song he just called out blues and proceeded to destroy this blues section, you know (laughs). He just had this feel for all that stuff unlike anybody. I love that stuff, but it's some of the hardest to do, because of the attitude and the way he approaches it rhythmically. To try to cop that is the goal.

Did you play much with him growing up? When I was a kid, I think I had a floppy insert record from a guitar magazine of you doing “Sharleena” with him.

Yep. I played with him five or six times on stage. The first time I had only been playing guitar for nine months. I was 12 and played with him at Hammersmith Odeon in London. The “Sharleena” you're talking about was four or five years later at Universal Amphitheatre in Los Angeles. I hadn't been playing that long, and now I've been playing almost 30 years, so there's a big difference in my ability. Most particularly, the last six or seven years working on this music, what I could do now is light years ahead of what I could've done at my best in previous years. I've always been technically proficient but the stuff I can do now is just ridiculous compared to that.

The recording quality of the new live album is exceptional. I always enjoyed “Broken Hearts Are For Assholes.”

Technology has improved in leaps and bounds … My dad actually had a complete recording studio in the trailer of a semi and he would record as many shows as he could, but he would have to ship that thing to Europe, so you can imagine the huge costs involved in doing that. Now that kind of technology can exist in something that weighs less than 200 pounds. So it's shocking that it's possible to do that and achieve excellent results.

I imagine it takes forever to master some of his longer songs.

Well, on a song like “Big Swifty” … the song itself has such dense harmonies we couldn't completely figure them out from the stereo mix, so we pulled out the master tapes from the vault and transcribed it 100 percent accurately. That's what makes this band different. We have such respect for the music we want people to hear it the way its supposed to be performed. But it's a lot of work … Each night, even if we play the same songs, his music is designed to have improvisational elements that exist only for that particular audience. So the way things unfold and build are different every night.

The genius of his music is that it can always evolve. The music is designed to have a relationship with the audience in that moment. That's different than playing the hit single, you know, “and here it is” every time.

What do you think Frank would've thought about “Peaches” winning a Grammy in this day and age?

Well, Frank had said that song might be the only song no one has ever said anything bad about. People just seem to like it. It came out in 1969 and some things he did to make that record sound that way it does are so creatively ahead of its time.

For example, on the record there are horn parts played—but he used the studio as an instrument. He took tape machines and slowed them down to record these horn parts, and when they're played at normal speed they're played in a register that those horns can't hit. So he effectively created an instrument that doesn't exist. If you took out those textures, the song wouldn't sound the way it sounds.  He did that with some bass guitar parts too … So he was utilizing studio technology even then to shape the sound, more so than people are even aware of … I felt like we played it note for note, exactly like the record and tried to recreate all the instrumentation. But I think what happened is that people recognized that the song never received the actual recognition it should, so here was an opportunity to rectify that. It wasn't so much what we did.

I'm glad it actually happened. In our family, we had always had an alternative impression of the Grammys anyway. We didn't look at them as a legitimate thing. It wasn't as much about great music as a popularity contest. But having been a recipient of this, I had to give them credit for recognizing something—it meant a lot that it actually happened. Very unexpected. I'm glad the voters recognized it.