How four Richmond museums are being transformed.

The Greek philosopher Heraclitus had it right: The only constant in life is change.

As anyone with a pulse can attest, the past couple years have been chockfull of change, what with the pandemic, the George Floyd protests, the removal of Confederate monuments and a new administration in the White House.

Not wanting to feel left out, some of Richmond’s biggest museums are also undergoing some major transformations. New wings and ways of thinking are in development. New partnerships are being formed with communities that have historically been underrepresented.

Richmond’s museums are about to look a lot different. Here’s what’s in store. 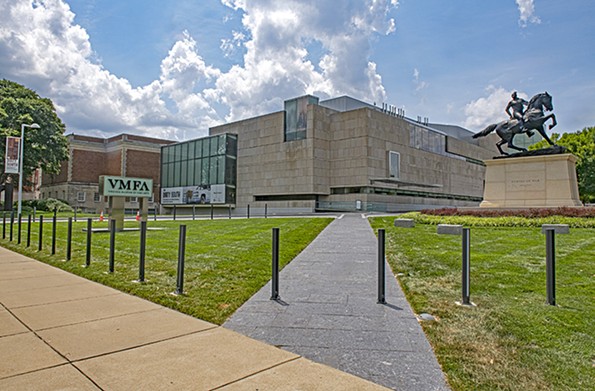 In June, the VMFA announced that it was embarking on a massive expansion that would be its largest ever, topping even the 2010 addition of the James W. and Frances G. McGlothlin Wing.

With a price tag of $190 million, the museum will add a new 100,000-square-foot wing, renovate 45,000 square feet of existing space and erect a stand-alone 40,000-square-foot collections center on its campus. Roughly 300 parking spaces will also be added. The locations of both the collections center and the parking spaces have yet to be determined.

The new wing will be added to the southwest corner of the existing building, coming off the 1985 West Wing and taking up the green space between the building and the sidewalk that bisects the grounds. This new wing will include a large space for special events that can seat as many as 500, expanded space for African art, photography and 21st-century art, and include a roughly 12,000-square-foot space for major exhibitions like the current “The Dirty South” exhibit. American art will take up nearly twice the space it currently does. 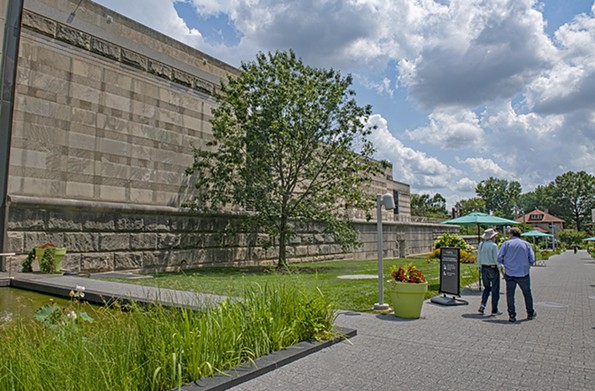 Alex Nyerges, the museum’s director and chief executive, says the new special exhibitions space is a big deal for the museum.

“It will allow us to have two major special exhibitions on at the same time and it will help us increase our attendance, increase our revenue,” says Nyerges, who came to the museum in 2006. “It’s going to increase tourism, giving people more reasons to come to Richmond.”

Renovations will take place in portions of the building that were constructed in 1936, 1954 and 1970. The Leslie Cheek Theater, Evans Court and the 1936 entrance also will receive upgrades. The museum’s former library will be transformed into the Raysor Center for the study of prints, photography and drawings.

“We’ll have real galleries for photography,” says Nyerges, who has written and lectured extensively about photography and has an exhibition of his own photography on display at the new Reynolds Gallery until July 25. No longer will photography be shunted off to the small, third-floor gallery space next to the museum’s restaurant, Amuse. “As some people like to say – sarcastically, I will add – it’s the gallery on the way to the bathroom,” he says.

SmithGroup, an internationally renowned architecture firm, began its planning phase earlier this month. Nyerges says the expansion will take about two years of design work and two years of construction, opening in the second half of 2025. Some galleries will close to undergo renovations, but the museum will stay open throughout the process.

When the expansion is complete, the museum will top 800,000 square feet of museum space, making it one of the largest contemporary art museums in the country.

“Not that size matters, but it does show a commitment from us to provide more gallery space, more art, more opportunities for programs and exhibitions,” Nyerges says. 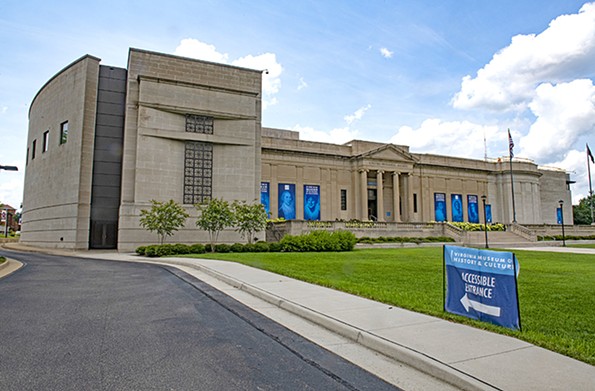 On the first floor of the Virginia Museum of History & Culture, something has become lodged in the tire of a woman’s wheelchair, rendering it inoperable. Bending down, Jamie Bosket, the museum’s president and chief executive, pulls a hunk of metal out of the tire. It’s an industrial staple.

“Construction!” says the woman with a laugh. Construction indeed. At that very moment, a team of construction workers is engaged in repurposing the western half of the building. 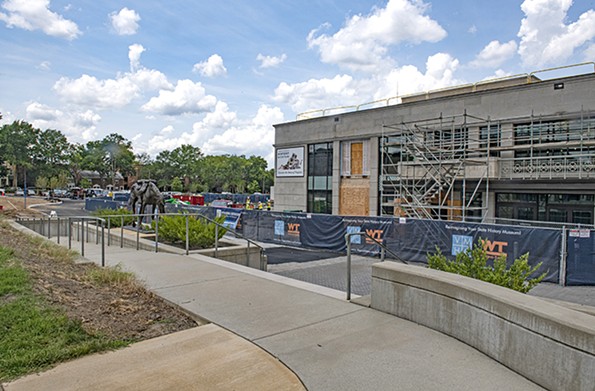 Last October, the museum broke ground on an expansion that will include six new exhibition spaces – adding nearly 50% more public exhibition space to the museum – an immersive orientation theater, a cafe, new museum store, children’s learning space, numerous education and meeting rooms, and a new research library with a state-of-the-art book and manuscript suite. The renewed facility will also include multiple community and event spaces, including a new great hall, a second-floor event terrace and expanded parking lot.

According to Bosket, this effort is a physical manifestation of the emotional and philosophical evolution of the institution. Since Bosket took the helm of the museum in 2017, many changes have already taken place, including the renaming of the museum from the Virginia Historical Society to the Virginia Museum of History & Culture in 2018.

The museum was involved in efforts to rename Boulevard after Richmond tennis great and humanitarian Arthur Ashe and played host to the renaming ceremony in June 2019. That year, the museum also exhibited “Determined: the 400-year Struggle for Black Equality.” The exhibit was the most successful in museum history and that year saw the museum’s highest attendance ever, double its historical average. 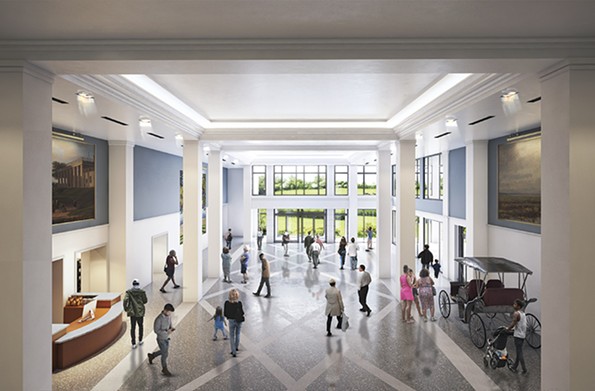 Along with the reimagining of the museum came the $35 million History Matters Campaign, an effort that will put $25 million towards capital improvements and $10 million towards endowment and outreach endeavors. The museum initially planned to open the revamped quarters in 2024, but when the pandemic hit, it sped up plans to complete the renovation and expansion by next spring.

“This will be the equivalent for us of what the big renovation was at the VMFA 10 years ago for them: a game changer,” says Bosket, adding that the museum is already halfway through the project. 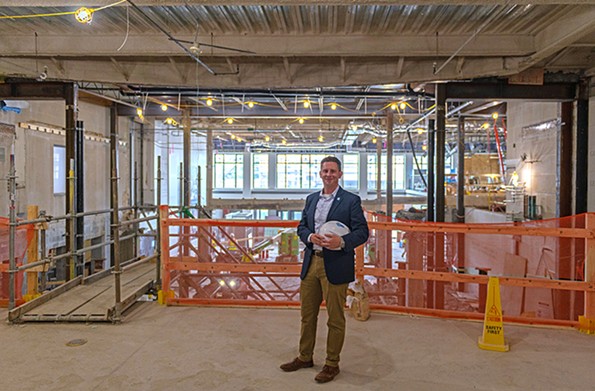 Bosket says the museum has worked in recent years to form partnerships with local groups and will provide them with space, including the new Richmond chapter of the Association for the Study of African American Life and History and Coming To The Table.

Additionally, Bosket says the museum’s new programming and exhibitions will take a much more inclusive approach than in the past. Though the museum has nine million items in its collection, Bosket says those items don’t fully represent the diversity of Virginia at this point.

“We have a responsibility to constantly grow that,” he says, noting that the museum has hired a new curatorial position that will focus on underrepresented communities and is hiring a new manager of partnerships and community engagement. “If it’s going to be an encyclopedic history of Virginia, we perpetually have to add things, and those things are not always beautiful works of art. Sometimes they are really raw representations of our history and our growth.”

Last year, the museum garnered headlines for its efforts to acquire part of the GRTC Pulse bus that was burned during the George Floyd protests in Richmond. It doesn’t appear that that will take place at this point.

“Last I heard is that [GRTC] decided not to go forward with donating parts or elements of that bus,” Bosket says.

The museum did, however, accept Gov. Ralph Northam’s request to take the statue of Robert E. Lee that once sat in the U.S. Capitol. Lee will be on display when the museum fully reopens. 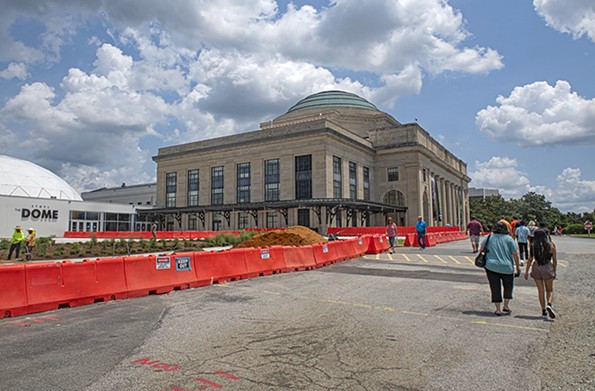 Along Broad Street, you can already see changes at the Science Museum of Virginia beginning to take shape.

Presently, a parking deck is under construction that should be completed by early fall. This construction is the first phase of a plan to redevelop the museum’s surface parking lot into a green space called the Green. Not only will it create a park and an outdoor classroom, but the removal of asphalt and addition of native plants will help cool the temperature in the area.

The museum recently has been involved with efforts to map urban heat islands. As low-income areas usually have high concentrations of unshaded roads and buildings, they’re generally hotter and can harm the health of the people who live there. The Green is an effort to address that with a 6-acre public space.

The parking deck will cost $14 million and the development of the Green will cost $7.5 million.

Jennifer Guild, spokeswoman for the museum, says the Green is expected to be completed by the end of 2022. In June, the museum opened its “Tyrannosaurs: Meet the Family” dinosaur exhibit [see article this issue]. In September, the museum will play host to “Hot Wheels: Race to Win” to teach patrons about the scientific process of designing race cars. 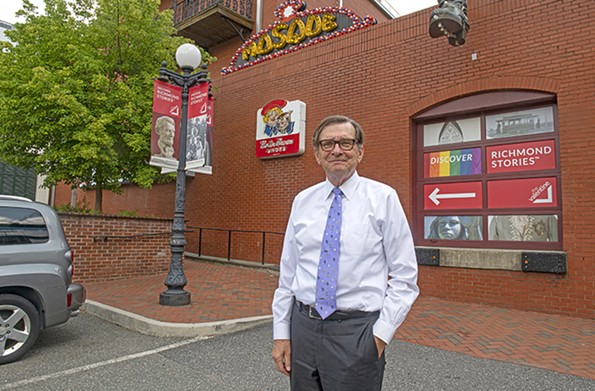 Bill Martin, the director of the Valentine, has long joked that the city’s history museum serves as “Richmond’s attic.” Now, he says, it’s hoping to Marie Kondo the place.

Walking past tables filled with crystal bowls and books about the colonial silversmiths of New York state, Martin says the museum in the process of pairing down the estimated 1.6 million objects in the collection to ensure that the items line up with the Valentine’s mission.

“It means, in many ways, looking at every single object and saying, ‘Does this object tell a Richmond story,’” says Martin, who first joined the Valentine as its marketing and public relations director in 1993.

For the past couple years, the Valentine has been culling its collection as it gears up to build a new addition to better store its objects as part of its Collections Care and Access Campaign. The addition will add two stories on an existing part of a building to better facilitate the collection and access to it. Martin estimates the project will cost $16 million, including $5.5 million in construction costs. The effort is the last phase of the Valentine’s 15-year-old master plan.

“It’s a long process,” Martin says of the effort to evaluate the entire Valentine collection. “The great thing about this is, in the process we’re discovering monster treasures.”

Some of those treasures include the turn of the century work of Fanny Chriss Payne, one of the first African American fashion designers in the country. Those costumes will be exhibited at a Met gala in the fall.

“We didn’t know we had them until we did this,” Martin says.

Many items in the Valentine’s collection have unknown back stories or are irrelevant to telling the story of Richmond.

“By taking [those] out, we have room for the rest of the stories to be told, and what we’re discovering is huge gaps in those stories,” he says. “If [space is] taken up by other things, you don’t really have space to add.”

The museum has also repatriated a collection of pottery crafted by the Pamunkey Indian Tribe.

“We’ve returned those to the tribe. They were pretty excited. And we’re excited about being able to put things back where they belong.”

Construction will begin at the end of 2022 and the collections addition will open by the following year, just in time for the Valentine’s 125th anniversary. The 1812 Wickham House and the Valentine’s galleries will remain open through construction.

Following roughly the same timeline, the Valentine is working to repair and reinterpret the sculpture studio of Edward Virginius Valentine on the museum’s campus. Now closed to the public, this studio was where many significant sculptures supporting the Lost Cause ideology were created, likely including the sculpture of Robert E. Lee that sat in the U.S. Capitol until last December.

Martin also wants the Valentine to acquire the Jefferson Davis sculpture that once resided on Monument Avenue from the city. It’s Martin’s hope to display the sculpture as it looked after it was pulled down by protesters last year: on its side and covered with graffiti.

“The Valentine has a unique opportunity to talk about the Lost Cause and what the last year has meant, and what the monuments are intended to mean,” he says.

In the collections room, Martin opens a drawer, showing a pair of Robert E. Lee’s boots next to a pair of purple suede sneakers.

“Those two things, together, are the Valentine,” he says.