Who but a journalist could stroll along the leafy streets of the Fan and the lazy banks of the James River and see nothing but high-level crime rings and half a dozen bodies hidden in the shadows?

For LynDee Walker, a Texas-bred reporter turned fiction writer who lives in Richmond with her family, those thoughts are all in a day's work. Walker's recently released light thriller, "Front Page Fatality," portrays Richmond caught in a web of intrigue, which hungry young journalist Nichelle Clarke is eager to untangle before she gets ensnared.

Since its late-January release, "Front Page Fatality" — the first of three books and a novella contracted by Texas publisher Henery Press — has caused a stir, shooting to a peak of No. 1 on Amazon's new-humor list, fifth on its humor list, and 10th on its mystery list. No one is more shocked than Walker. 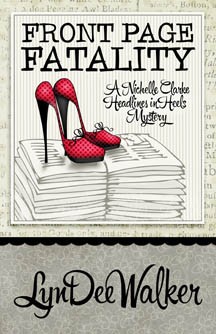 "This doesn't happen to authors that nobody's heard of that don't have million-dollar marketing budgets," she says. "I have no explanation for it."

Except, of course, the story's quality. Although the very high, very red pair of heels that adorn the book's cover may make it look like chick lit, there's little fluff in its pages. Tight, fast-paced and funny, "Front Page Fatality" immediately draws the reader in, provides plenty of twists, and keeps its audience guessing up to the end.

Walker's years in a newsroom obviously have paid off: Her pacing is expert, her knowledge of police and court procedure evident, and her dialogue natural — the product of years of interviews. "Writing down everything people say and really listening to other people when they talk and how they speak, I think that's a lot of it," she says. "I'm able to pull on that as I hear these people talking in my head."

Nichelle is the most engaging of Walker's realistic cast of characters and a refreshing change from most female heroines. As a Texas girl reared by a single mother and with an eye on The Washington Post, she's also somewhat autobiographical.

"[My mother] raised me to think that you don't depend on anyone else, and you ... stand on your own two feet, so there's a lot of that in Nichelle," Walker says. "I didn't want her to be the damsel in distress that somebody else had to come in and rescue."

Walker's experiences are embedded throughout the novel, with one of the best being an anecdote about a junkyard owner who wakes up to a casket on his doorstep. To help Nichelle dig up the truth for the Telegraph — no relation, Walker promises, to the Richmond Times-Dispatch — Walker drew on her time covering news in Texas, although the Lone Star State and the Commonwealth didn't always prove interchangeable.

"I was into my third or fourth revision before I figured out that prosecutors are called commonwealth's attorneys, not district attorneys," she says, laughing.

Jargon aside, Richmond readers will enjoy seeing Nichelle prowl their city's streets, although they may never look at the warehouses of Shockoe Bottom the same way again. Walker only names a few venues explicitly but gives enough description so that people familiar with Richmond can guess what bars and restaurants Nichelle is frequenting.

She's also made some welcome changes to the River City, throwing the Flying Squirrels out and welcoming the major league Richmond Generals.

The local response to "Front Page Fatality" has been enthusiastic. Fountain Books held a launch party for the book in February, but even before then, the buzz was enough to prompt owner Kelly Justice to order 60 copies of the book, more than double the usual order for a first-time author.

"I was getting enough phone calls and a lot of orders from out of state, so I needed to stock for that," Justice says. All 60 copies sold out rapidly. At Chesterfield Town Center, Barnes & Noble also sold out of its initial order.

It's been an unexpected ride for Walker, but it's hardly over. The second installment of Nichelle's story, entitled "Buried Leads" and also set in Richmond, is due out in October.

But although she welcomes the success, Walker just seems happy to keep on writing. "I wrote it because I loved it," she says. "Not because I was sure anyone would buy it." S

"Front Page Fatality" is on sale online and in-store at Fountain Books and the Barnes & Noble at Chesterfield Town Center.