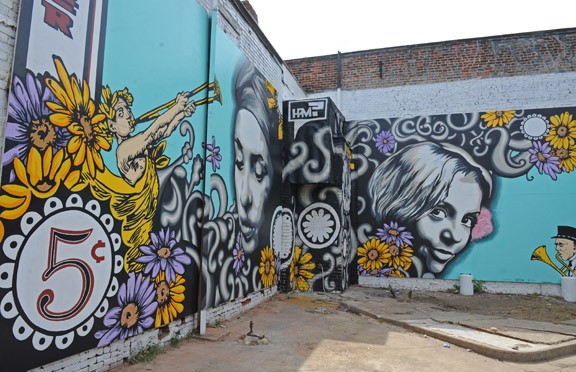 In the city’s historic districts, bricks are sacred. Even crappy, crumbling bricks that were never meant to see the light of day.

But just this once, it’s all right that artists covered these historic bricks with murals, the city’s Commission for Architectural Review decided Tuesday.

The bright murals along Broad Street, in the new downtown arts district, were painted in early summer by teams of artists and volunteers. The beautification project was supported by Altria, Venture Richmond, HandsOn Greater Richmond, Johnson Inc. and well-known muralist Ed Trask.

After the murals were completed, city zoning enforcers realized three had broken the rules. They were on a short section of Broad that’s an official Old and Historic District, where any visible changes to building exteriors must first be approved by the commission.

The abstract painting of dancers at 508 W. Broad St. was actually done on a wooden panel, then attached to the brick, staff noted. The commission quickly gave it the OK.

Trask’s piece, a Waller family portrait on the side of the Waller & Co. Jewelers building at 16 E. Broad St., inspired some hand-wringing. The mural was painted on inferior brick that was only exposed when the building next door burned down, city staff pointed out. Nevertheless, one commission member said, the city’s guidelines dictate that “painting previously unpainted masonry is historically inaccurate and is not permitted.”

With two members dissenting, the commission approved the piece -- with the stipulation that future murals must be painted on removable panels.

The third mural at Brook Road and Adams Street, an elaborate homage to Richmond’s theater history by artist Hamilton Glass, is coming down. Not because it’s an affront to architecture, but because one of the buildings it’s attached to is being sold.

Most of that mural was painted on panels, which will be moved elsewhere. Before the panels are installed on another building, Venture Richmond Executive Director Jack Berry says, they’ll ask permission first.