Muralist Mickael Broth Explores His Own Interests at Glave Kocen 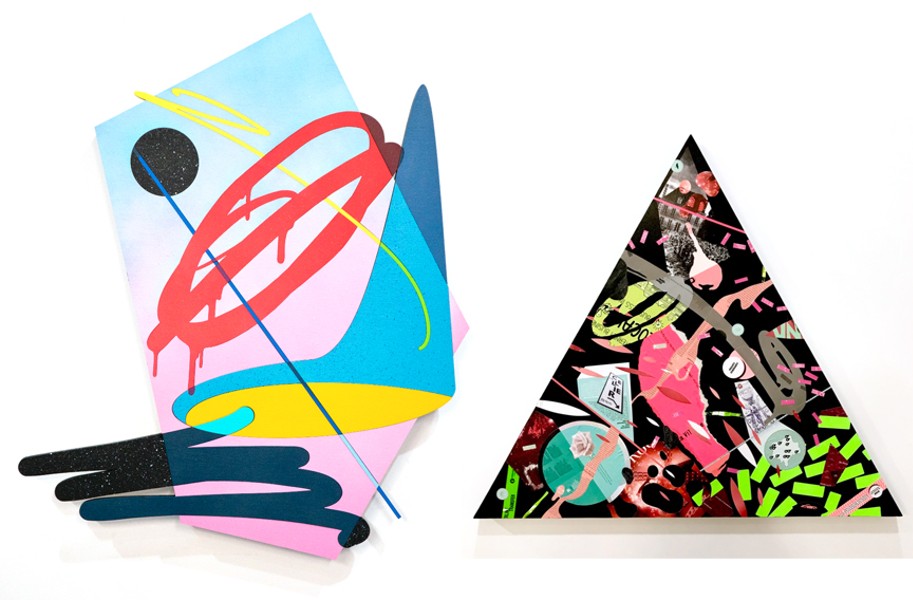 As the centerpiece of his new exhibition, Mickael Broth has created what he calls "a tin foil hat for the soul."

An artist known for his murals — the viral slam-dancing Bernie Sanders, the water tower at the Cookie Factory Lofts — Broth loves painting murals for a living. But with commissions come clients who ultimately must be satisfied. When making his own art, he has only himself to please, allowing him to bring more of himself to the work.

"Chaos Magick," his latest show at Glave Kocen Gallery, shows what Broth does when allowed to pursue his own visions. Since December, he's been working with mixed media under resin on panels, using pieces of patterned paper and magazine cutouts to refashion them into narratives that, at first glance, appear to be floating objects. In fact, he wants them to be seen as abstract paintings.

Broth says the show's title, "Chaos Magick," refers to his theory of art making by creating something from nothing through the rituals of intention and practice. The new abstract work draws on the chaotic energy and compositions of his earlier drawings while removing recognizable imagery and adding a wildly vibrant palette.

Part of the reason for his shift from drawing to bright, colorful abstractions can be attributed to his thinking of the multimedia works more as paintings than collages.

"When I look at these works, I see the lines and shapes as having a narrative, but that's probably only in my brain," he says from his backyard studio in North Side. "It would be like winning the jackpot if someone else saw that."

Acknowledging that we live in an age of visual overload, Broth set out to embrace the cacophony through a meditative practice he coined "saturationism" and then coat the works in resin to mimic the glossiness of consumer culture. "It allows me to focus on the moment with color, texture and pattern," he explains. "By immersing myself into bits of consumer culture, I can ignore it."

To allow others a respite from stimulus onslaught, Broth crafted a brightly-colored wooden tepee he calls "Under the Black Moon Spell," that sits under a hanging hat. Designed as an immersive and interactive escape pod, the tepee is Broth's idea of a "tinfoil hat for the soul," a place of solitude and retreat from the world of saturationism.

When he's not busy with mural-painting assignments, Broth welcomes the opportunity to create at will, whether it gets seen or not. "With this art, nobody gets to have a say," Broth insists. "I like making it whether I was showing it or not. I've got to keep my brain busy, but I'm also putting my heart and soul out there." S