Unwrap the life of Ti-Ameny-Net at the University of Richmond. 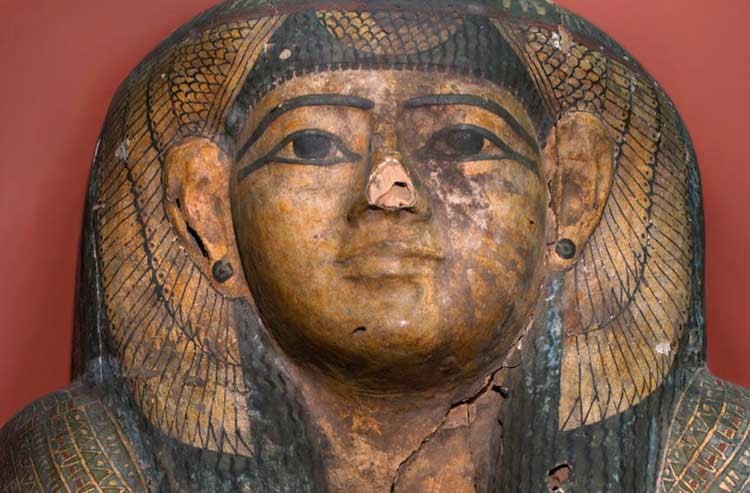 While the passage of 3,000 years has obscured much about the life of the Egyptian woman named Ti-Ameny-Net, we know her mummy has been having quite the time since arriving on the campus of Richmond College in 1876.

Her nomadic life includes a stint in the biology museum, a stay in a professor's living room and even time spent in a closet before becoming a focal point of the University of Richmond's ancient world gallery in the late '70s. It was there, four years ago, that her small, wrapped body, bandages darkened by time and resin, caught the attention of undergraduate student Caroline Cobert.

Cobert approached Elizabeth Baughan, an assistant professor of classics and archaeology, in her freshman year. "[She] had this idea to study the mummy and had even suggested an exhibit and doing facial reconstruction," Baughan says. "I thought, wow, this is getting a little ambitious."

But that's exactly what Cobert, who's getting a dual degree in biology and classical civilization, has achieved. "Ti-Ameny-Net: an Ancient Mummy, an Egyptian Woman, and Modern Science" opens at the University of Richmond Museums this week. Included with the mummy will be an elaborately painted coffin, a selection of Egyptian artifacts and the results of Cobert's studies — including CT-scans using the latest technology which reveal new information about the life of Ti-Ameny-Net.

"For the museum it's kind of a perfect storm," says Elizabeth Schlatter, deputy director and curator. "We love having great objects and great student research. It really showcases what the university has in its history and our collections." It's also a chance to get another mummy fix after the Virginia Museum of Fine Arts' vaunted "Secrets of the Tomb" exhibit closes March 11.

With the help of Ann Fulcher, chairwoman of the radiology department at VCU Medical Center, Ti-Ameny-Net has been scanned and X-rayed, and a sample of DNA was obtained from bone marrow. Cobert's junior year was spent testing the DNA and also researching the history of the mummy for her senior classics thesis. "My nickname in the biology department is Mummy Girl," Cobert says. "I think my friends are sick of me pulling out CT-scans at the lunch table and saying, 'Hey guys, look at this!'"

One of Cobert's discoveries is that Ti-Ameny-Net might well have been the victim of the infamous mummy unwrapping parties popular among Victorian aristocracy. Excavated at Thebes for the entertainment of the Prince of Wales, later Edward VII, the mummy was given to an American translator, who sold her to Jabez L. M. Curry, a professor at Richmond College, who donated her to the newly founded museum.

"Her face is perfectly preserved," Cobert says, "but the very top of her head has no existing flesh, and there's no logical reason for that except that when those wrappings were removed it was done in such a way that the resin adhered to the skin and it was pulled off. If she was unwrapped in a more considerate setting, that never would have occurred."

Cobert — who says that she will miss "Tia" when she graduates this spring — took good care of the mummy when she transported her to VCU Medical Center for the CT scans. Referring to YouTube videos of mummy-packing methods, she disemboweled a bean-bag chair, filled Ziploc bags with the pellets and used them to cushion Ti-Ameny-Net's body. It took three days.

"I didn't think it was appropriate to use plain Ziplock bags," Cobert says, " so I bought Disney Princess Ziplock sandwich bags, because every girl is a princess." It's only fitting. On Ti-Ameny-Net's lovely coffin, adorned with a headdress of vulture wings, is a prayer that, in the afterlife, she will receive "everything which is pleasing."

"The main hope of the exhibit," Baughan says, "is to bring to light what we do know about Ti-Ameny-Net and ... share that with a greater public outside the university. Let her have a little respectful, dignified spotlight compared to maybe what she has had previously." S

"Ti-Ameny Net: an Ancient Mummy, an Egyptian Woman, and Modern Science" opens Feb. 23 and runs through June 29 at the Lora Robins Gallery of Design from Nature at the University of Richmond. For information, go to museums.richmond.edu or call 289-8276.