Where love equals  a mango lassi. 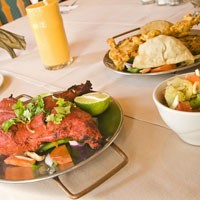 As its name suggests, Ruchee Unique Indian Cuisine is full of surprises. Hidden at the end of a strip mall on Midlothian Turnpike, Ruchee is easy to miss. Inside, the dAccor reflects the unassuming location. A booth seat has been repaired with duct tape, and the tables, chairs and Formica bar look a little dated. The soft sitar music and hazy paintings of sari-clad young ladies are familiar trademarks of a suburban Indian restaurant. Aside from an eye-catching statue of the Hindu deity Ganesha — an elephant-headed figure with multiple arms — at the entrance, the aesthetics at Ruchee are far from memorable. But fans of South Asian cuisine, take note: This menu goes well beyond chicken tikka masala.

At $8.95, the lunch buffet is a great deal, and clearly has been discovered by local nine-to-fivers. Groups of young professionals, single diners in business attire and a few couples and families make up the lunch scene, working their way through the wide array of hot and cold appetizers and entrees, and even a few desserts (avoid the mango-carrot pudding and stick to the fruit). The plethora of meatless options will keep vegetarians happy, such as the spicy mixed vegetable curry, paneer makhani, cottage cheese cubes in a creamy tomato sauce, and lentil dal — all tasty and satisfying. Perfectly seasoned fried sesame and potato patties are a standout.

No lamb or seafood dishes are offered on the lunch buffet, but there are several chicken dishes. The tandoor kebabs are a highlight, well-seasoned and juicy, while a variation on tikka masala and a sweet-and-sour chicken are flavorful but swimming in an oily sauce. Like the regular menu, the buffet includes some Indo-Chinese specialties, said to have been developed by small Chinese communities in some of the larger Indian cities and now popular with many Indian expats.

Traditional Indian breads, such as naan and roti, do not fare well under buffet heat lamps, but the biryani, a basmati rice dish, is a good substitute for soaking up sauces. The chefs change the buffet selections daily and most are not on the menu, so it's an inexpensive way to experiment with new flavors.

The highlight of my lunch is not a buffet option, though: It's the mango lassi. This sweet and creamy yogurt drink is full to bursting with fresh, ripe mango and is reason enough to come to Ruchee. It can quickly become an obsession that inspires one to pack children in the car and drive for miles to get it — be forewarned.

Similar to my experience at the lunch buffet, the best dinner choices are not the most traditional dishes. The chicken tikka masala bears the usual creamy tomato richness but is overly oily and quite spicy, even after a request for mild heat. The lamb saagwala, cooked in spinach, ginger and garlic, is also oily and almost painfully spicy, but otherwise not noteworthy. Two classic Indian appetizers are an exception, however: The samosa, crispy pockets of seasoned potatoes and peas, and chicken pakora are perfectly fried and nicely seasoned. The lamb pasanda (lamb in a cashew nut sauce) is creamy and flavorful, though the lamb is somewhat fatty. The star of the meal, as at lunch, is a tandoori dish, the malai tikka. Marinated in a cashew nut and cheese sauce for 12 hours, then grilled in a clay oven, this chicken might just transport you to the streets of Mumbai.

In addition to the North Indian dishes that occupy most of the menu and often have dairy-based sauces, such as paneers and tikkas, the offerings at Ruchee also include South Indian specialties, which tend to be rice- or lentil-based. The masala dosa may remind some diners of an Ethiopian meal, with the large, slightly spongy, rice-and-lentil crepe stuffed with tasty seasoned potatoes and onions, which you can eat with your hands.

If you try Ruchee, go for lunch or order the malai tikka to take out, and don't forget the mango lassi. Richmond's Indian food may never rival London's, but we have a promising upstart in our midst. The owners will open Ruchee Express near Virginia Commonwealth University later this winter, giving the Fan an Indian cafAc option specializing in take-out and delivery.