“Cedar Rapids” is a sporadically funny mash-up of comedy styles. 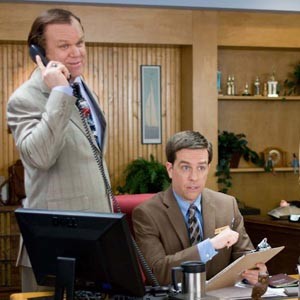 What kind of movie is “Cedar Rapids”? That's a difficult question to answer, even after you've seen it.

On the surface it looks like another in a spate of recent comedies that puts goofy characters in even goofier situations. In this case we have Tim Lippe (Ed Helms), an impossibly naA_ve insurance salesman on his first trip out of town, to a convention in nearby Cedar Rapids, Iowa. There he gets caught up in the hijinks of some alternately straight-laced and fratlike colleagues, including John C. Reilly as Dean Zeigler, the loudmouthed, wild-and-crazy opposite of Tim. So partly this is a John C. Reilly movie, of the “Step Brothers” variety. Also, for those who helped make “The Hangover” a hit, it's an Ed Helms movie. Well, yes and no.

In a way “Cedar Rapids” also is an Alexander Payne and Jim Taylor movie, produced by the duo that wrote and directed some classic American comic dramas such as “About Schmidt” and “Sideways.” This time they're only producers, but you can feel their influence, especially in some of the careful observations made about the Midwest. Actually you can feel a lot of influences, perhaps too many, and, at the same time, not enough. For the director, Miguel Arteta (“Youth in Revolt”), this is another competent if undistinguished effort. If it resembles his minor indie hit “The Good Girl,” it's partly because both lack a strong point of view and try to be too many things at once, succeeding only in spurts.

“Cedar Rapids” opens in a Midwest hamlet where Tim earnestly sells insurance to contented customers. He's the embodiment of the locally owned, small-town company where he works, which is equally provincial and upstanding, at least on the surface. Cracks begin to appear on this facade almost immediately, however, when the company's polished leading salesman (Thomas Lennon) dies under extremely seedy circumstances. His passing leaves an opening for Tim to take his place at a yearly convention in Cedar Rapids, where he must deliver a presentation to secure a coveted industry rating, which the company has won the past three years. It's a lot of pressure, especially for someone who's never even been on a plane.

The movie gets its drive and many of its better moments from Tim's unusual lack of experience, delivering humorous observations about small-town, suburban life along with a fair share of farce and scatological humor. And yet nothing that happens to Tim comes close to a surprise. He has trouble at the airport and the concierge, which seems reasonable enough, but also turns out to be the most naturally gifted guy at the convention, seducing multiple women, making best friends (including Anne Heche and Isiah Whitlock Jr.) and coming up against the most unusual obstacles. He even wins the talent show. If you've seen one buddy comedy or romantic comedy in the past five years you can guess what happens next: Extreme dilemma; everything seems lost. Tim digs deep and overcomes, becoming a better person — without losing his innocence in the process, of course.

Anyone hoping “Cedar Rapids” is Payne's next treatise on the human condition will be disappointed. (At the very least they're going to wonder what Reilly is doing running around with a trash-can lid on his head.) Yet those who show up for the simple zaniness of a Helms-Reilly pairing might think “Cedar Rapids” ponderous and underwritten. The movie is getting great reviews as it makes its way around the country, but it provides neither big laughs nor big insights, though it attempts both.

“Cedar Rapids” has its humorous moments, but a lot of it seems like it should be funnier, or at least more competently implemented. Lennon's brief appearance on the screen as Helms' predecessor practically begs for a broader sketch of his character. Likewise, Rob Corddry shows up late for what seems like a last-minute descent into the kind of comic insanity promised all along — something that at least would alleviate the methodical pace. Tim is “abducted” by a new prostitute friend (Alia Shawkat) and taken to a wild party on the edge of town. Unfortunately Corddry's character has been pared down to little more than a walk-on, and Tim is quickly rescued by his friends, who shepherd both the man and the movie back to the safety of the conventional plot. 86 min.