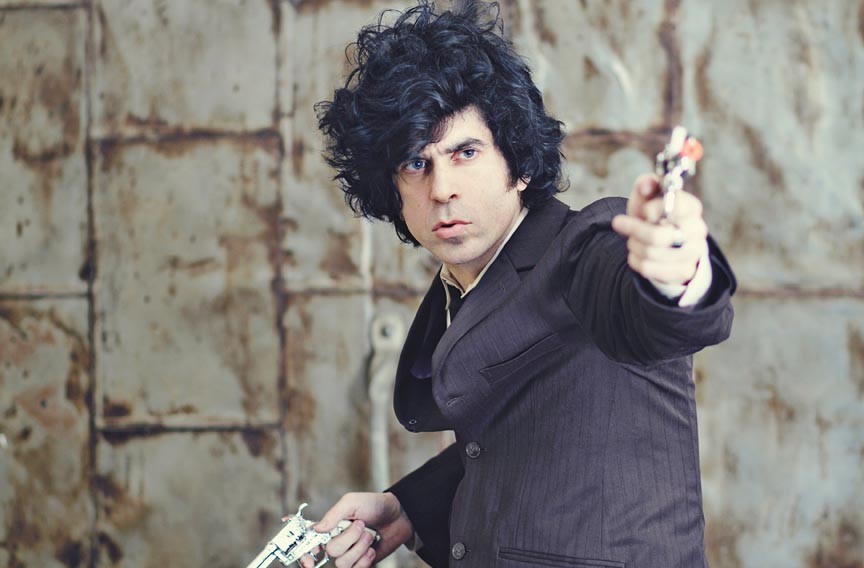 Thinking about forming a rock group? Have you considered the importance of your group's name, look and transportation options? Have you decided whether its main purpose is to be "A) famous, or B) sexually popular … or C) to write good songs in the style of another particular group, or possibly D) to advance a particular ideology?"

If you answered A through C then you're probably looking in the wrong place, according to iconic Washington rock musician and author Ian Svenonius: "If your ambition is d) some kind of social, aesthetic, or vaguely political goal, however, the group is the ideal medium for your message."

This isn't exactly surprising coming from the stylish lead singer who once fronted D.C.'s legendary post-hardcore group, Nation of Ulysses, with its socialist manifestos and tongue-in-cheek militancy. The questions above, excerpted in Harper's Magazine, come from Svenonius' new book, "Supernatural Strategies for Making a Rock 'n' Roll Group."

Throughout its 250 pages, the author demystifies the modern rock group with a mixture of veteran insight and intellectual posturing that can be both hilarious and fascinating. There are long tangents about gang culture, music and capitalism, and chapters based around séances calling on dead music stars as wide-ranging as Brian Jones, Big Mama Thornton and Mary Wells (Svenonius just might hold a séance at his book event in Richmond, he says). The book is published by Akashic Books, known for the popular children's book parody "Go the ___ to Sleep."

Svenonius says he wanted to write something more philosophical than a nuts-and-bolts book on starting a band. "It's really more of an exploration of what a group is, the conventions and assumptions behind bands," he says. "Maybe people trying to start a group will read the book and think more about what this endeavor is. The only real advice is to get on with it, don't worry about the ideal."

When I first met Svenonius more than 20 years ago, his scowl was already semifamous. The year was 1991 and Nation of Ulysses was playing with my weirdo friends' space rock group, Sexual Milkshake (a name Svenonius approves of to this day) at their house on Old South High Street in Harrisonburg. Dressed entirely in black, his pompadour slicked back, the singer milled around the kitchen. Beside him, there was a magazine clipping tacked to the fridge, an article from Sassy Magazine's inaugural "Sassiest Boy in America" contest. The big winner: Ian Svenonius ("We just knew, the way you know when it's time to change a tampon," the editor wrote, adding, "He's going to be a big deal"). That night Svenonius looked more like a pachuco gangster from the '50s than a teenybopper magazine idol.

"I was really fascinated by gangs becoming political in the mid-'60s -- the Black Panthers, the latent politics of the gangs becoming explicit," Svenonius says, returning to a chapter in his book on the appeal of bands. "It's often not as musical as it is addressing a kind of alienation in the culture. You know, it's a stand-in for community, the same thing that sports teams try to create. … Beethoven's music isn't played by people called Cannibal and the Headhunters, or whatever. Rock 'n' roll explicitly descended from this gang culture. Groups were just a commodity version."

What happened that night in my friends' living room was a revelation. After an opening bugle call, Nation of Ulysses exploded like one of those new-school, fuel-air-explosive American bombs that suck up all the oxygen within a city block. Each member was ricocheting wildly around the room as if by synchronized electrocution while playing violently fast music. Bleeding from ramming the microphone into his mouth, Svenonius was like a cornered monkey darting atop sofas and screaming songs such as "Atom Bomb" and "Love Is a Bull Market." It was a freak-out punk performance of the first order that felt more like an initiation -- a little dangerous but life affirming.

"I think Nation of Ulysses was the first band to have an explicit manifesto in D.C.," Svenonius says. "I was reading the 'Futurist Manifesto'; we would pass our manifestos out at shows. Bikini Kill and Bratmobile were the next stage of that, more specifically rooted in fanzines and the material world. Ours was more mytho-poetic."

Ulysses broke up too soon and Svenonius began his run as a Washington rock personality and now elder statesman, fronting bands that helped inspire a widespread interest in older musical styles -- from the gospel yeh-yeh of the Make-Up, to the chic garage rock of Weird War, Scene Creamers and currently, Chain and the Gang. The son of a University of Maryland symbolic logic and medieval philosophy professor, Svenonius also earned a reputation as a colorful host, guiding the VBS.tv show "Soft Focus," which interviews notoriously reclusive artists such as Mark E. Smith and Will Oldham.

More recently, Svenonius has been interviewed by national media about feminist punkers Bikini Kill's unique place in the rock canon. He says it's interesting to watch his own musical history written: "It makes you realize how warped all history is. It's a reduction of everything. You have to simplify and they're so many victims of history. The only answer is to write alternative histories, which can be just as warped."

It sounds almost as if Svenonius missed his calling, but he's quick to dismiss any idea that he might have had some other, more academic career.

"I never considered anything really. I'm just one of those people that shuffles along, a real one-day-at-a-timer and I've been doing it a long time now," he says. "But I do love history, it's fun. Constantly being revised and challenged. It's as plastic as anything."