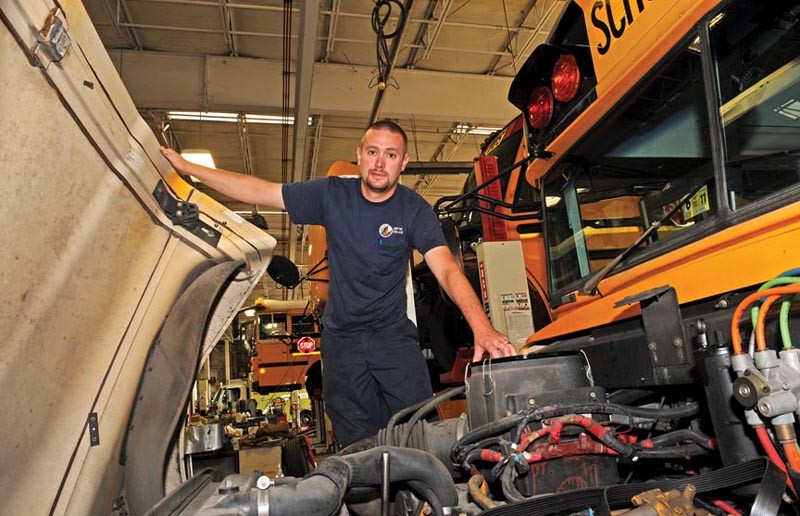 Henrico parents, your children are in good hands — for their trips to school, anyway.

To win the title in a recent competition, Sharpe had to diagnose multiple problems with three school buses. For each bus, he was given one minute to read a work order and four minutes to figure out what was wrong. One had a clutch that needed adjustment. One had bolts missing from the drive shaft. Pretty simple problems, he says.

“They were simple to Jason, but not simple to many of the others,” interjects Alan Eddleton, the county’s superintendent of maintenance. Sharpe beat 14 competitors to win his title.

In September Sharpe will get on an airplane for the first time (he’s not thrilled about that) and head to San Antonio to compete for the title of America’s best school bus technician.

Sharpe has engine oil in the blood. A Louisa County native, when he was young he helped his father work on cars. After working at a Ford dealership and getting his associate’s degree from J. Sargeant Reynolds Community College, he got a job with the county.

The 86,000-square-foot garage on Woodman Road feels like the hangar deck of an aircraft carrier, with yellow buses in place of fighter jets. Sharpe’s red metal tool chest is decorated with pictures of his wife, Heather, who’s a school counselor, and magnets from places they’ve traveled: Virginia Beach, Nags Head, Gatlinburg, Tenn. On top is his trophy, still in the box.

Henrico County has a fleet of 620 school buses. State law requires that each be brought in for inspection every 30 working days. That means on an average morning during the school year, 20 buses roll in the door.

When a bus comes in, Sharpe checks all the lights, instruments and alarms. Then the bus gets hoisted by four massive lifts so Sharpe can check the underside for signs of brake wear and exhaust leaks. Sharpe also fixes buses roadside when they break down.

The county’s mechanics work on all kinds of vehicles, including million-dollar fire trucks, but the school bus work is the most important thing they do, Eddleton says: “There’s no room for error. At all.”