Mozart on the Hill

Courtesy of Classical Revolution RVA The Mozart Festival during symphony performances at the Urban Farmhouse in 2019.

You know Mozart is a big deal because “The Simpsons” devoted an entire episode to him, with Bart playing the composer.

In the season 15 episode, “The Magical Music Tour,” Bart performs Mozart’s Piano Sonata No. 9 in D, K.311. But because it’s “The Simpsons,” Mozart’s compositions were given alternate titles such as “Beans, Beans, the Musical Fruit” for “Eine Kleine Nachtmusik.” Still, it’s Mozart’s music.

The mission of Classical Revolution RVA is to bring classical music out of the concert hall into more accessible spaces, keeping the music alive by sharing it with people who wouldn't ordinarily hear it in their everyday lives. The festival puts classical music - specifically, compositions by Mozart - on display in public places and creates a buzz around it.

“My favorite thing about Mozart's music is the way he crafts a melody,” says Classical Revolution’s General Director Becca Longhenry. “At times, his writing for the inner voices such as viola can be monotonous, but the melodies we hear in his operas and symphonies are so memorable and absolutely charming.”

A new neighborhood is chosen for the festival every two years, which allows the first year to be a pilot year, making the second year easier. The primary goal is to bring live classical music to neighborhoods where there isn't a large classical music presence - or sometimes even a live music presence - so the choice of neighborhoods rotates based on practical considerations such as how many public venues are available, as well as their size and accessibility.

In addition to performances throughout the day, there will be a lecture at Sub Rosa Bakery at 3 p.m. Hosts Timshel Purdum, the director of education at the Science Museum of VA, and Joshua Borths, the resident scholar at Virginia Opera, will discuss Mozart's music and its relationship to birdsong, with musical examples from “The Bird Fancier's Delight” by Katharine Moore Tibbets. 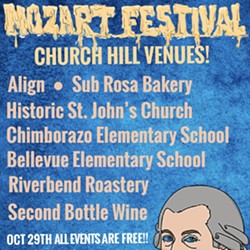 One event tailored specifically for young ears is Wolfie Time, from 10 to 11:45 a.m. at Chimborazo Elementary School. Wolfie Time will include an instrument petting zoo, crafts, story time, and a student recital featuring children performing works by Mozart. Following the event, interested attendees can walk to Bellevue Elementary School, where the Thomas Jefferson Vikings Marching band and the Sweet Potatoes jazz band will perform selections by Mozart at the school’s Harvest Festival.

Although there are countless other composers equally deserving of the listening public’s attention – notably, many from underrepresented demographics — Mozart is one of the best-known and loved classical composers. “Mozart is an easy entry point for many listeners, most of whom have already encountered his melodies in pop culture, like in the film ‘Amadeus,’” says Longhenry. “Our hope is that following the festival, audiences will seek out more classical music in its many forms, as well as attend our other events where we feature living and underrepresented composers as often as possible.”

Audiences will see and hear over 50 professional musicians perform over the course of the day, and that’s not including the many young musicians performing in the student recital at Wolfie Time and in the TJ Vikings Marching Band. “Our professional musicians come from a variety of backgrounds. Some play with the Richmond Symphony, while others are freelancers and gigging musicians around town,” Longhenry explains. “Most of the students performing at Wolfie Time study with musicians who’ll be performing or have performed with Classical Revolution RVA.”

This year's musical selections were made partly based on the spaces available. Church Hill offers many intimate spaces, so the focus is primarily on chamber music. “We love to give creative freedom to our musical artists, so the first half of the day includes pieces selected by the performers who’ll be playing them,” she says. “The latter half of the day, however, was programmed with specific themes in mind.” That means that the Caffeine, Conniving and Cosi event at Riverbend Roastery was programmed specifically because it takes place at a coffee shop. The 4 p.m. concert features Mozart's chamber music performed by local small ensembles, and the 6 p.m. concert features soloists playing wind instruments with an orchestra.

Longhenry sees the appeal of the festival as encountering Mozart's music in the wild.

“Most people already love the music and know what they expect to hear when they choose to attend a music festival,” she says. “But we want to surprise and enchant even those who were not planning to attend and are just going about their lives in the neighborhood.”

Classical Revolution RVA’s Mozart Festival is held on Saturday, Oct. 29 from 10 a.m. to 7 p.m. at various Church Hill locations. The events are free to attend. For more information, visit classicalrevolutionrva.com.