You check your mailbox. A mysterious VHS tape is inside. You find the nearest VCR, press play and an unreleased recording by one of your favorite artists starts playing.

That was the intriguing experience for a hundred of Lucy Dacus’ devoted listeners, who in early 2021 received a surprise VHS copy of her song “Thumbs.” It wouldn’t be the last of the lovingly outdated video format they’d see.

Dacus’ third full-length album, out this Friday on Matador Records, is titled “Home Video.” The set of 11 new songs dives deep into her upbringing in Richmond with candid storytelling about the kind of relationships and milestones that tend to rush back in vivid detail when watching grainy camcorder footage – something Dacus has been doing quite a bit lately.

The first single for the new album, “Hot & Heavy,” was released alongside a music video that weaves together clips of Dacus being held as an infant, singing in children’s choirs and waving to the videographer, who was often her dad. “It was definitely mostly fun, up until a certain age,” Dacus says of sifting through digitized memories from her childhood. “When I’m a baby, that always makes me cackle.” 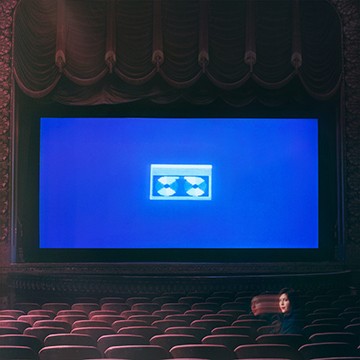 In the “Hot & Heavy” video, Dacus watches the montage from a flower-adorned row of seats at the Byrd Theatre in Carytown, which also graces the cover of “Home Video.” It’s a striking moment, nodding both to the song’s retrospective lyrics (“Heavy memories weighing on my brain / Hot and heavy in the basement of your parents’ place”) and the fact that the onstage vantage point has become a regular part of Dacus’ life.

“She called me and she pretty much walked me through the entire plot of the video,” recounts longtime friend and “Home Video” visual director Marin Leong, who co-directed the video with Dacus. “We both knew that we wanted it to involve the space where we’d shot the [album] cover and her home videos, because we’d been archiving those for a really long time.”

“I was really happy that the Byrd let us film there,” Dacus says. “I spent so many different eras of my life going to that place. And only leaving Richmond touring and traveling helped me to understand how special that is. There’s not a Byrd in every town.”

But the video isn’t all warmth and nostalgia. There’s a sense of unease in parts that mirrors Dacus’ experience as an increasingly Instagrammable presence in town. Given the success of her previous two LPs, “No Burden” (2016) and “Historian” (2018), and of the EP she released in 2018 with boygenius bandmates Julien Baker and Phoebe Bridgers, Dacus was being recognized around Richmond more frequently.

It’s not an easy way to live, notes her guitarist.

“Being the face of the project and having her name out there so much can be a really stressful way to live, especially in a place as small as Richmond,” says Jacob Blizard, who also co-produced the new album.

Hardywood Park Craft Brewery was the scene of one particularly upsetting interaction, in which an unfamiliar man approached her, mispronounced her last name and then recited her address. In 2019, she moved to Philadelphia, providing distance and a fresh point of view.

“I’d never lived anywhere else,” she says, “and I was having a hard time distinguishing myself from Richmond. It felt so close that it felt like a part of me, or it felt like I was it. I don’t know, it sounds trippy to put it into words, but I realized I think I just needed a sense of perspective.”

She speaks highly of her hometown – of the river, the restaurants and the musicians – at the same time she acknowledges that her grounding began to give way even before that uncomfortable closeness developed.

“I was away from home,” Dacus explains, “so some friendships just fell apart. And familiarity with the music scene – I don’t know any house venues in Richmond anymore. I have always blamed that on beginning to tour more, but then I realized actually that might just be growing up. Why am I assigning this to my career? My friends who are about to be in their 30s also don’t know where the house venues are. And that’s OK, because probably some teens and 20-year-olds are doing it and I don’t need to find out about it.”

“I hope that it’s happening,” she adds, “because it was so formative for me.”

A circle of collaborators

Despite the separation in space and time between that point in Dacus’ journey and this one, the continuity in her circle of collaborators means Richmond is well represented in her creative process. Much of the look and sound of “Home Video” was crafted by a group that’s been connected since middle and high school – even earlier, in some cases.

“I’ve realized how important it is to me that wherever I go, I bring people that I love,” says Dacus. “And I mean that physically, but also in terms of my career.”

Jacob Blizard and Marin Leong attended Appomattox Regional Governor’s School for the Arts and Technology in Petersburg. So did Collin Pastore, who co-produced each of Dacus’ albums with Blizard and Dacus herself. Though Dacus attended Maggie L. Walker Governor’s School in Richmond, and though Blizard and Pastore are a few years older, family friendships bridged those divides.

Leong’s and Pastore’s families have been close as long as they can remember, and Pastore first crossed paths with Dacus as a result of his younger brother’s involvement with Theatre IV (now the Virginia Repertory Theatre), where Dacus’ mother has long provided musical direction and accompaniment. Dacus and her band recently taped a performance of “Hot & Heavy” at Virginia Rep for “The Late Show with Stephen Colbert.”

Pastore and Blizard went on to study music at separate colleges, but the close friends share a memory of first encountering Dacus’ gift as a singer-songwriter at a get-together while on break. 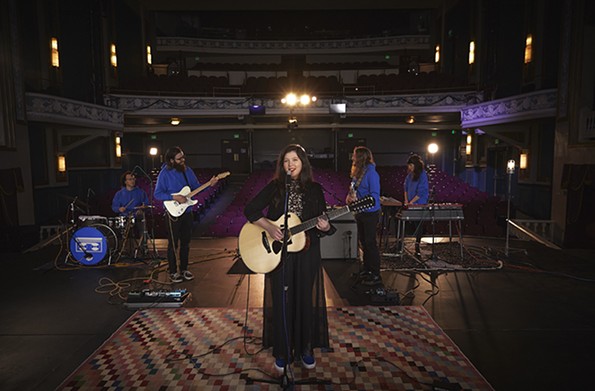 “I remember sitting around in a circle on Collin’s parents’ back porch,” Blizard says. “Everyone who was a songwriter would play one of their songs, and everyone who was a musician would try to join in by the second verse or second chorus and play along.”

Dacus’ talents were immediately apparent. “It was magnetic,” Pastore says of first hearing her resonant alto. “You couldn’t stop listening to her sing.”

“She has an amazing voice,” Blizard remembers thinking. “She’s what, like 15 years old? And writing a song as good as any adult songwriter I know?”

Dacus writes with arresting clarity. Words fall into place like puzzle pieces finding their homes, both in terms of phrasing and the way they can answer open questions in your mind.

“It’s always been apparent that she had a very specific voice to tell stories with, and to think about the world with,” Leong says.

“The spin on the way she tells stories is unique,” Pastore notes. “I haven’t heard it anywhere else. ... Whereas a lot of people would sit there and go, ‘I feel this way,’ Lucy is sitting there going, ‘This is how the thing is.’”

Her songs often open with a wallop. The beginning of “My Mother & I,” a track from her holiday-themed “2019” EP, is a short story unto itself: “My mother hates her body / We share the same outline / She swears that she loves mine.” That song marked the beginning of a new chapter in which greater specificity makes it easier for the people she writes about to recognize themselves.

“I didn’t really realize that I was holding back before, but I was, for better or worse,” Dacus says. “I think it’s fine because if you’re not ready for something, you just aren’t. You can’t rush that process. But I’ve been noticing that I’m just ready for more, and ready to say things that I previously wasn’t.”

That newfound transparency takes center stage on “Home Video.” “Every song is about one-on-one interactions for the most part,” Pastore says, “which I think is really compelling.”

Those interactions range from the cringe-worthy locking of “lips and braces brackets” in “Going Going Gone” to the friendship that’s forbidden from crossing over into queer love in “Triple Dog Dare.” Dacus shared select songs with their sources of inspiration ahead of the album’s release.

Step three proved to be unexpectedly rewarding for “VBS,” which chronicles Dacus’ time at Vacation Bible School summer camp. A worship leader from the camp reached out via social media after the song’s May release. “It was awesome to hear from him,” Dacus says. “It was like, ‘I didn’t even realize that this could reach you.’”

She also heard from a friend who shared her o-dark-thirty youth group routine. Before heading to Chickahominy Middle School, Dacus would wake up at 5 a.m., be driven by one of her parents to Virginia Center Commons – either Panera or Chick-fil-A – and talk about God over breakfast sandwiches. It was prayer with a side of practice navigating the world as a grown-up.

“It felt so cool to not have to ride the bus,” she remembers. “Little things like that made it feel like this special, adult, not-kid activity. Spending money at all felt so adult because I didn’t have an allowance, but my parents would give me like ten bucks [for] a Panera sandwich. … It felt so meaningful to go through these minor motions.”

The “VBS” video was animated singlehandedly by Marin Leong. Graceful movement and subtle symbolism give shape to an imagined space representing Dacus’ relationship with faith, which has gone through stages of transformation since those early-morning Bible studies. “I kept thinking about the motion of walking, and walking slowly,” Leong says of hearing “VBS” for the first time. “She’s walking and observing and things are changing around her, which is what it feels like to evolve as a person.”

Dacus’ relationship with her new collection of songs is on its own evolutionary journey, one shaped in part by the pandemic’s pause in touring. “Most of the songs I’ve never played live,” she confirms.

She’s scheduled for a two-night co-headling run with Julien Baker at the National in September – but first she’ll be touring as an opener for Bright Eyes, including a stop in Charlottesville at Ting Pavilion on Aug. 3.

“I maybe want people to understand that when they see me onstage, it will be a work in progress,” she says. “I think sometimes you show up to a show and you’re looking at a result. … Whereas I feel like I’m still in the middle of it. So I don’t know how it’s going to make me feel to play them live, but I am so excited to find out.” 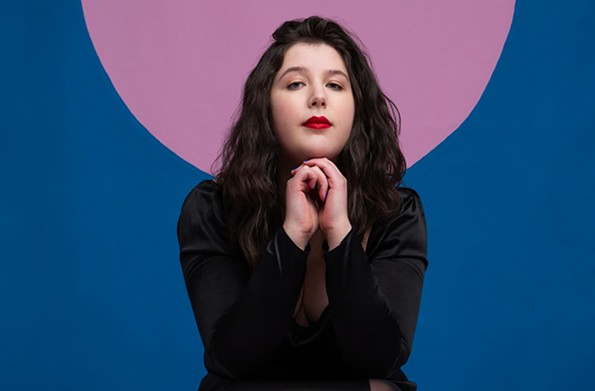