Moving into a Masterpiece

The Virginia Museum's new director and his wife get settled. 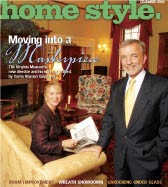 When Alex Nyerges landed the position of director of the Virginia Museum of Fine Arts in August, he was accepting more than a great job. He and his wife, Kathryn, also earned the right to live in a piece of Virginia history — The Oaks — nestled into a wooded lot on an out-of-the-way street in the tony Windsor Farms neighborhood.

Unlike college presidents, few museum directors are provided homes, according to the Association of Art Museum Directors. In 1975, a wealthy museum patron named Lizzie Edmunds Boyd donated the home to VMFA. Just five directors have lived in the 18th-century gem, and perhaps none has been as well suited as the Nyergeses, although it didn't seem that way at first.

The Nyergeses' last home couldn't be any more different. Coming from Dayton, Ohio, the couple had downsized into a modern 16th-floor condo. At one time Kathryn had a business importing Chinese antiques, and their previous homes were filled with pieces she had discovered on buying trips. The Oaks, on the other hand, has a very colonial feel, with its shake roof and warm-stained woodwork. It's filled with antiques, such as drop-leaf tables and corner cupboard, that were given to the museum over the years.

While their new home may sound like a far cry from the Asian/modern look they had lived with before, Kathryn points out that the Chinese invented many of the design elements we associate with European and American antiques.

"The Chinese were really the originators of all good design," she says. From mortise-and-tenon joinery to the lines of a camelback sofa, "Virtually everything you see has its roots in Chinese design and construction," adds Alex, motioning to the home's mostly Virginia antiques.

The Nyergeses are pleased to see their Chinese antiques complement the home and its furniture so well. Alex started his career as an archaeologist studying the Colonial American period. The couple had always dreamed of living in an 18th-century home and had looked at some properties in Virginia and North Carolina, hoping to someday settle closer to Kathryn's family in North Carolina.

"We've always been members of historic-preservation societies and gone to look at houses that were for sale," says Kathryn. But as Alex pointed out, it's difficult to find 18th-century properties — which makes their move to The Oaks seem like fate.

The Oaks was built in Amelia County sometime around 1745; the exact date isn't known. Engineered by Englishmen, it sat on a large property peppered with oak trees. It was the main house and features several design elements found only in the most formal domestic architecture of the 18th century. Local craftsmen built mantels in the living room and dining room modeled after early-Renaissance Venetian styles. Also unusual is the wainscoting in the first-floor rooms, which is made of wide poplar boards.

The house passed through several owners and at one time was a boys' school; some of the woodwork upstairs has carvings made by students.

Lizzie Boyd bought the house, which had lain vacant for many years, and arranged to have the structure moved to Richmond in 1927. It arrived by train and was put back together, and a kitchen and butler's pantry were added. The main part of the house was clad in brick salvaged from the foundation; the original wings remained clapboard, but a new front porch was constructed of 18th-century materials. Boyd, who was a friend of Brooke Astor's, kept copious notes and wrote a book about her travels (which Kathryn is currently reading). She bequeathed The Oaks to the Virginia Museum of Fine Arts, and 30 years ago the first director moved in.

Three years ago, the VMFA Foundation had the kitchen renovated at the request of former director Michael Brand and his wife. At the same time, the remodeled stainless steel and dark wood kitchen was added, plus a breakfast room, terrace and pergola. Other than this portion of the house and some adjustments that were made for bathrooms and closets, the house remains very similar to the way it looked when it was built, with its four bedrooms, front and back staircases, dining room, parlor and office. Upstairs, in addition to the master bedroom and guest bedroom, the Nyergeses use one as an office and another as a den/TV room.

Coming into all this history, the Nyergeses were conservative about which of their own pieces they added to the furniture the museum had already placed in the house. Aside from the similar design techniques, Kathryn points out, "simple Chinese antiques go with virtually any environment." And unlike many of the Chinese antiques found in this country now, the couple's pieces don't have a lot of color or ornamentation. They also have matched chairs, which are difficult to find, and large pieces, which speak to the stature of the household they came from.

A large altar table sits center stage in the living room. An 18th-century piece from Beijing, it would have been used in a temple or well-off household, says Kathryn. She points out the carvings on the side and the symbolism of each detail. "That's part of what I love — it's this mystery to uncover," she says.

Two matching hat chairs sit in the front windows and flank an American walnut secretary. The shape of the backs of the chairs, which were designed for officials, echo the style of the hats the scholar officials wore.

Aside from the Chinese antiques, the Nyergeses also have a collection of black-and-white photographs they cleverly blended into the décor. Several Eleanor Parke Custis seafaring photos — tight, angular shots of ships — hang in the hallway because, as Alex observes, ships hearken to an era when the sea was important to the colonies. An Ansel Adams landscape and a Charles Moore portrait of Martin Luther King Jr. hang in the office downstairs as inspiration.

Aside from furnishings and art, the Nyergeses also chose new paint colors and wallpaper for the home. And as sticklers for authenticity, they chose historic paints and papers appropriate to the 18th-century style that would have been used in this area of the country.

"We were interested in seeing colors that were reflective of the period," says Kathryn. "It would be hard for me to live in this house and not have it be historically accurate. I'd feel awkward about it." A golden yellow warms the living room and Williamsburg blue ties in with the toile curtains in the dining room, which were provided by the museum foundation. In the hallway, which has always been ivory in the past, the Nyergeses found an 18th-century reproduction wallpaper with a Chinese pagoda motif, which marries the American colonial and Chinese themes throughout the house.

Used for cocktail parties, meetings of trustees and the board of directors, as well as retreats for curators and senior managers, the home becomes an extension of the museum on many occasions. "It's so special that it really needs to be shared with as many people as possible," says Kathryn. "The mission of the museum is to serve the commonwealth, so everyone should be through at least one time or another, if for Garden Week or something else." HS