Movie Review: "To Rome with Love" 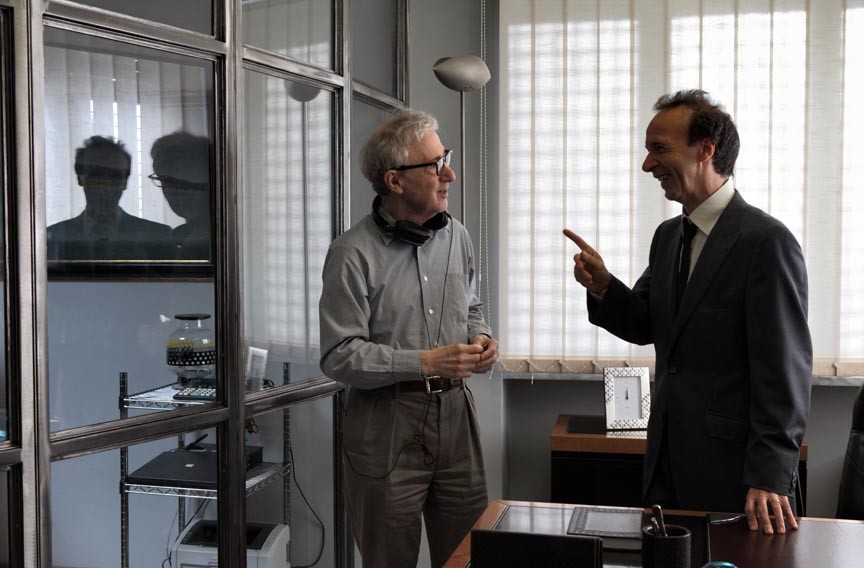 In Woody Allen's latest, "To Rome with Love," Roberto Benigni plays Leopoldo, a completely average and unremarkable Italian office worker. We watch him dutifully wake early, eat breakfast with his family and drive off to work in a fuel-efficient car on the way to the office cubicle, as if he's done it a thousand times without incident. Except there's an incident.

While he's leaving the house, he's mobbed by the Italian paparazzi. A black sedan pulls up and whisks the startled Leopoldo away, eventually to a television talk show, where he's interviewed about the most banal details of his life. Is this a case of mistaken identity, or has Leopoldo done something? He isn't sure, but after the television interview, he slowly realizes he's become an instant celebrity. People want his picture, his autograph, his body, or just a quotation about how he prepares his toast. He can't go anywhere without being recognized, a development he understands as dimly as we do. He's famous for being famous, a fellow Italian explains to him, like a scrawny, balding Kardashian.

Leopoldo's story is an energetic if somewhat obvious satire of celebrity. It might have been the basis of another great Allen film, to follow last year's equally imaginative and magical "Midnight in Paris." But Allen decided to do an ensemble piece this time, and Leopoldo's story shares the screen with several other vignettes, all of varying quality and none of them connected. There's a young couple, Jack (Jesse Eisenberg) and Sally (Greta Gerwig), who take in Sally's actress friend Monica (Ellen Page) during her vacation; a father (Allen) visits Rome with his wife (Judy Davis) to meet their daughter's (Alison Pill) Italian fiance (Flavio Parenti); and a fourth, mostly forgettable, story follows Italian newlyweds from the country (Alessandro Tiberi and Alessandra Mastronardi) who become separated in different adventures, one involving a curvaceous Penelope Cruz.

The most prominent bit is also one of the film's weakest: the romantic triangle among Jack, Sally and Monica, which, like Leopoldo's tale, is too brief to achieve its potential. Alec Baldwin is wickedly endearing as Eisenberg's sardonic conscience, warning him about the impending doom of allowing a second beautiful woman into his home. But the young leads come across like a perfunctory version of the threesome in "Vicky Cristina Barcelona," a problem compounded by the miscasting of Gerwig and Page. The boyish, reedy Page just doesn't seem very realistic as a sexy movie star who seduces Jack, and Allen's decision to push the provocative, up-and-coming Gerwig to the periphery as a nerdy grad student is a waste of talent. Casting against type only works when it works, and anyone with a smattering of movie history knows that when you have a Greta with this much star power, you use it.

This isn't Allen's worst film, and he's certainly smart about timing its release. "To Rome with Love" offers more laughs than most other summer fare. But it's a letdown after Allen's last outing, too much like a medley of past hits than a work of new material. Some critics and commentators, perhaps going with a Rome-half-full approach, have called the city itself the film's star. That's a nice way of calling the movie average, but Allen has never shown any interest in how his films look, leaving those details to competent cinematographers. There's no Woody Allen visual style, and all of his recent filmmaking treks across Europe have offered little more than the tourist-eye view of their locations. This outing is no exception.

No, the star of Woody Allen's latest film is Woody Allen, in the sense that he's the one most enjoying it, a venerable superstar filmmaker doing whatever suits his fancy, in whatever fabulous city of his choice, with whatever fabulous actors. "To Rome with Love" is self-satisfied, a state of complacency not good for Allen or his audience. Near the film's finale, Leopoldo finds out that being famous and being a nobody each has its problems, but that being famous always is better. That's a strange message for this movie. It may be great being Woody Allen, but there's a danger of even the most famous, prolific filmmaker slipping into routine, showing up mechanically every year, like the Cannes version of Leopoldo. (PG-13) 112 min. S

To Rome With Love