Movie Review: "The Way Way Back"

This coming-of-age story is inhibited by its teenage actor. 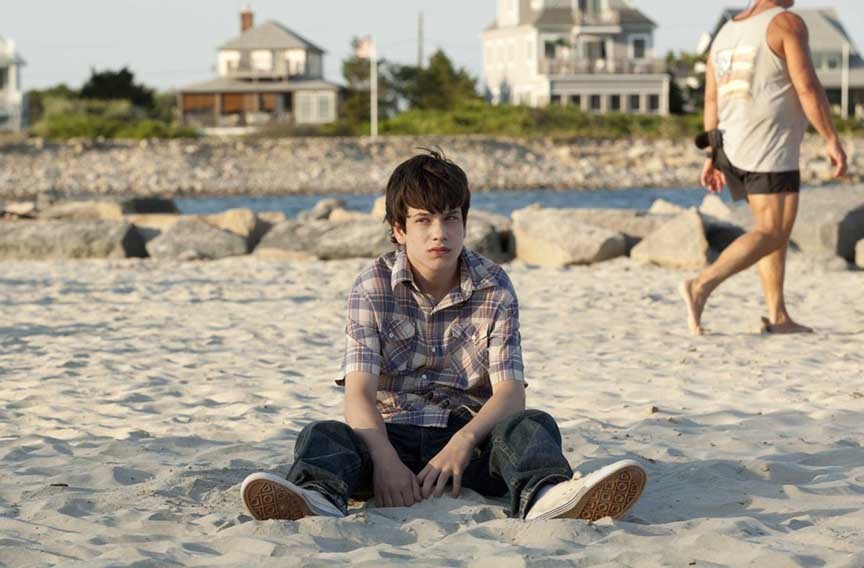 Coming-of-age stories, whether mostly serious, such as "Stand by Me," or mostly comic, such as the new film "The Way Way Back," have one absolutely essential ingredient. They need child actors who can convincingly play people whose personalities move forward in some way. There are a lot of positive things you can say about "The Way Way Back," but it doesn't have that essential ingredient. For this movie to succeed, they needed to go way, way back into casting and try again.

The story follows the travails of Duncan (Liam James), who isn't at all pleased about having to spend summer vacation with his mom, Pam (Toni Collette), and her new boyfriend, Trent (Steve Carell), at the latter's beach house. Trent is obnoxious — arrogant and condescending. Lecturing Duncan during the film's opening, he brutally tells the boy that he needs to improve his social skills. "You're a three out of 10," he says.

Carell's interpretation of Trent is the unexpected highlight of the film. In a surprising career turn, the erstwhile comic dredges up a memorable, believable villain, with a loathsome and childish pettiness reminiscent of the stepfather played by Robert DeNiro in "This Boy's Life." But Carell's commendable and uncharacteristic performance is out of step with the rest of the cast, who variously align on one side or the other between goofy comedy and serious drama. None of the supporting actors is particularly bad, but they all seem to be off in their own movies.

Unfortunately, the same doesn't apply to James as Duncan. He's just bad. Yes, he's just a kid, and to be fair, his character must endure a lot. Trent constantly emasculates Duncan, making him wear an embarrassingly oversized lifejacket on a boating trip, for example, when no one else has to. It's no wonder Duncan begins sneaking off early every morning (on a girl's bicycle — one of many touches, it must be acknowledged, that make this a bearable comedy).

It's on these excursions that Duncan runs into Owen, the caretaker of a local water park called Water Wizz. Owen is the antithesis of Trent: easygoing and honestly friendly. He takes a liking to Duncan and tries to help him with his confidence, even to the point of hiring him.

I wish the movie was more about this relationship and its contrast to Trent's hypocrisies. "The Way Way Back" was written and directed by Nat Faxon and Jim Rash, who won a best-adapted screenplay Oscar with Alexander Payne for 2010's "The Descendents." Working solo, they've given in to their worst impulses. The movie has a ramshackle quality similar to Owen's water park, inelegantly attempting to create a Judd Apatow-style blend of comedy and drama that's all over the place.

Trent's bawdy neighbor Betty (Allison Janney) and his best friends, Kip and Joan (Rob Corddry and Amanda Peet), provide some decent comic relief, as do the water park employees. Most provide at least one laugh-out-loud moment. But Faxon and Rash aren't as adept at creating a convincing story or developing Duncan as a sympathetic character.

Questions go unanswered, such as why Owen takes such an interest in Duncan, and why Betty's pretty daughter (AnnaSophia Robb) does too. We never witness any reason, certainly not from Duncan. It's just assumed that people should like him, unless they're jerks like Trent. That kind of assumption is common in films like this, but usually supported by a strong, likeable lead actor, which Liam James is not. At the risk of coming off like Trent, the kid is way less than a three.

Although probably a fine young person in real life, James wasn't the right choice for this role, which, if it wanted to lean toward the comic, cried out for a Michael Cera type of 10 years ago. Duncan is supposed to be painfully awkward, but James can only clench his fists and squint his face. He doesn't have the tools necessary to modify the character's personality when Owen helps him loosen up. James' one-note performance eventually comes to irritate. It's difficult to enjoy any movie when you cringe at the mere sight of the protagonist. The family ends up cutting its vacation short, but the bigger disappointment is that Faxon and Rash cut their movie short. (PG-13) 96 min. S

The Way, Way Back