Movie Review: "The Void" is a Nasty Little Film that Deserves a Following 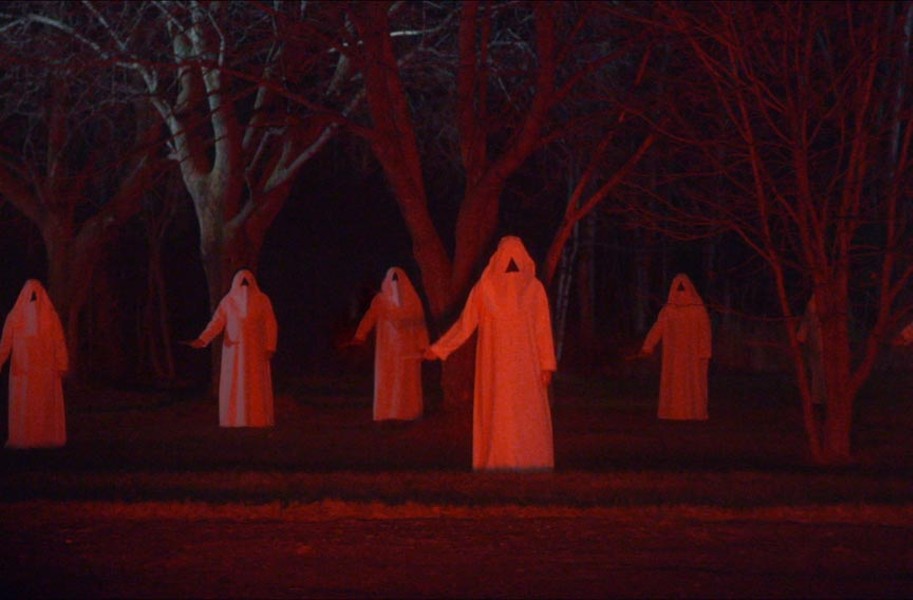 Mysterious hooded figures wait outside the hospital. If you’re a fan of John Carpenter and George Romero, you’ll want to check out the supernatural siege horror film, “The Void,” playing at the Bijou Film Center.

Despite their undeservedly flimsy reputation, horror films serve a number of constructive purposes in society, such as most obviously providing audience members with an outlet for their real-life anxieties.

Horror films also offer valuable primers on handling certain, shall we say, extreme circumstances. For instance, a connoisseur of the genre knows that one should never, and I repeat, never attempt to recover from the death of a loved one by raising the dead and establishing an interdimensional pathway to realms of terrifying H.P. Lovecraftian grandeur.

With this truth in mind, it’s evident that the antagonists of “The Void” have not seen the horror films that have inspired the writing and directing team of Jeremy Gillespie and Steven Kostanski. Otherwise the film’s suffering heroes would be saved quite a bit of trouble.

The directors indicate their fealties early on when they feature a scene from George A. Romero’s immortal “Night of the Living Dead” in the background of a room in the imperiled hospital that serves as the predominant setting.

Which is to say that “The Void” is derivative as hell, but Gillespie and Kostanski — who’ve worked on several of Guillermo del Toro’s recent films and on the visionary television series “Hannibal” — orchestrate their carnage with atmospheric élan. They possess an especially astute instinct for oscillating between different gradations of violence, knowing when to merely suggest an atrocity and when to really floor the gas pedal in respects to the gore.

Some scenes are rife with squishy, bladdery, multilegged, multifaced, tentacle-sprouting beasts, and other moments hauntingly climax with a silhouette of a murderous or self-defensive gesture, such as when a hero is called upon to deliver a coup de grâce with an ax.

I’m being coy with plot synopsis because “The Void” has a buggy, nightmarishly free-associative intensity that benefits from ignorance of where the story is headed, even for people who are familiar with Gillespie and Kostanski’s reference points.

OK, a few orienting details: There’s a hospital inhabited by a nighttime skeleton crew that hasn’t entirely recovered from a mysterious fire, and a local police officer, Daniel Carter (Aaron Poole), who’s a likably green professional with a secret that complements the hospital’s shadowy history. A doctor, Richard Powell (Kenneth Welsh), has a secret of his own, and is clearly too supportive and fatherly in the film’s first act to be up to any good. There’s also a pregnant girl (Grace Munro), a requisite character of the siege-horror template, and one should heed the clue from “Night of the Living Dead” that her chances of seeing the morning aren’t so hot.

There are ghastly images of people in white robes with triangles sewn over the hoods, standing in storybook-aura woods and suggesting interdimensional Klansmen. Late in “The Void,” a basement setting is filmed with a sense of colorful luridness, abounding in dank blues and greens that achieve a hypnotically disorienting effect, reflecting the characters’ growing enslavement to irrationality.

Gillespie and Kostanski are promising talents, and “The Void” is a nasty little midnight movie that deserves a cult following. Watching it, I wondered if Romero and Carpenter, those irascible legends, might be inclined to tip their hats to “The Void” in a gesture of encouragement as well as respect. S

“The Void” plays at the Bijou, 304 E. Broad St., from April 13-16. For tickets and show times visit bijoufilmcenter.org.