This polio survivor's tale is one of the best comedies in years. 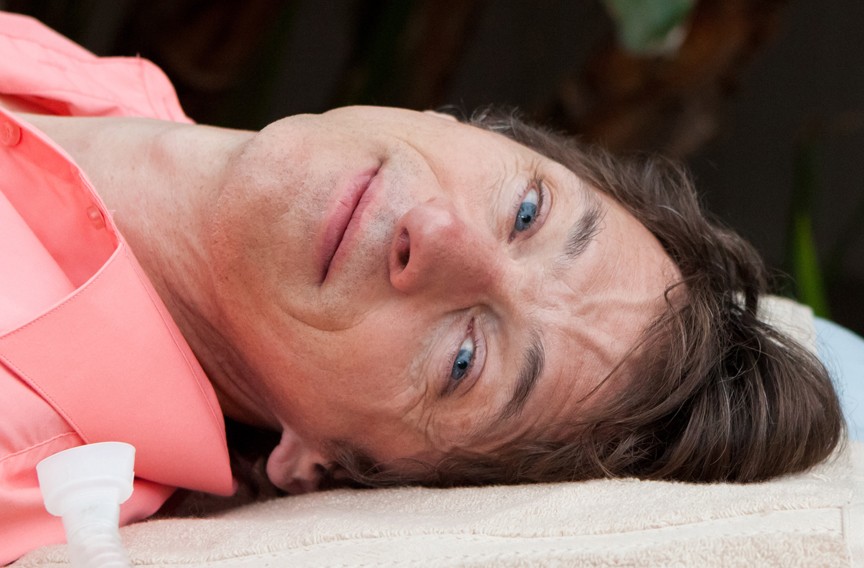 We first meet the idealistic Amanda (Annika Marks) as a student looking for a job on a college message board. She grabs a clever handwritten ad placed by Mark O'Brien (John Hawkes), an adult who suffered polio as a child and cannot move his body below his neck. He seeks a new paid caretaker. We think we know what's coming next — a young girl, fresh out of college, is taking a job that involves dressing and bathing a physically immobile 38-year-old man. She won't last.

Technically, the man isn't paraplegic — his body feels touch, pain, all sensations. But his wasted muscles leave him paralyzed, his breathing powered by an ancient (circa 1988) iron lung all but a few hours of the day. Graduating from the University of California at Berkley with honors, he's a successful journalist and poet with a potent desire to live a normal life.

Deeply religious, Mark tells Father Brendan, the new parish priest (William H. Macy) about his desire to hire a sex therapist and have intercourse before his "use-by date." Brendan, pondering an altar statue of Jesus, has an epiphany and replies, "I think God will give you a pass on this." They've only just met, but when Mark asks him for a hug, Brendan bends over and embraces him without a glint of hesitation. You expect him to shirk but you're surprised when he totally commits to the hug — aren't movie priests supposed to be less than perfect?

"The Sessions," based on the real life of journalist and poet Mark O'Brien, is writer and director Ben Lewin's film about unconditional kindness — and it avoids the big plot points and sentimentality that could have sunk this story like a brick. This film is one of the best comedies in years. But don't cringe — it also has some of the most graphic sex ever seen in a mainstream film.

When Mark tells Amanda he loves her, she's deeply touched, but isn't reciprocal in a sexual way. She moves on. This sets in motion some of Mark's yearnings. The sex finally comes in the form of Cheryl Cohen Greene, the aforementioned therapist, medically trained, sensitive and brilliantly portrayed by Helen Hunt. For a fee, she'll guide Mark to his first simultaneous orgasm. But she'll only see a patient for six sessions. The intimate sex scenes are a little uncomfortable — not only does this movie avoid easy sentimentality; it forces you into challenging circumstances you might not ordinarily want to see on a trip to the movies.

With this role, Hawkes moves into the pantheon of actors who can contort a new physical demeanor for each role. O'Brien, who's small, sensitive, draped on a gurney, and high-voiced, is the polar opposite of Teardrop, the virile, powerful, deep-voiced meth addict in "Winter's Bone," a performance that earned the actor an Academy Award nomination. Though not as physically authoritative as Teardrop, O'Brien exudes an equal power with his words and heart; his wry humor and self-effacements disarm complete strangers.

Hawkes spent hours in the iron lung, twisted in pain on his gurney to simulate O'Brien's severely curved spine and allegedly even suffered some organ damage. O'Brien's body is grotesquely twisted, his head cocked to the side, typing his poems and articles using his mouth and a stick. Only a very few overhead shots (I counted two) give him normal close-ups. His entire performance is with his head horizontal, forcing us to look at him the way friends and colleagues did: eyes on one side of his face, mouth on the other, like a Picasso portrait. It's an astonishing performance. Hunt, a remarkable actor, also bares a lot more than her body.

Director Lewin, a polio survivor who walks with crutches, lets the natural drama guide the story and it's consistently surprising and fresh. Much like David Seidler, screenwriter of "The King's Speech," Lewin is a disabled late bloomer who, for decades, has written and directed minor films in Australia and on American television ("Ally McBeal"). Lewin's long apprenticeship proves a sturdy hand guiding a tricky subject that could be mishandled in so many ways. He now finds himself at the ripe old age of 66 discovered by Hollywood. (R) 95 minutes. S