Movie Review: The Romantically Dramatic "Brooklyn" is a Fantasy Made For Another Time 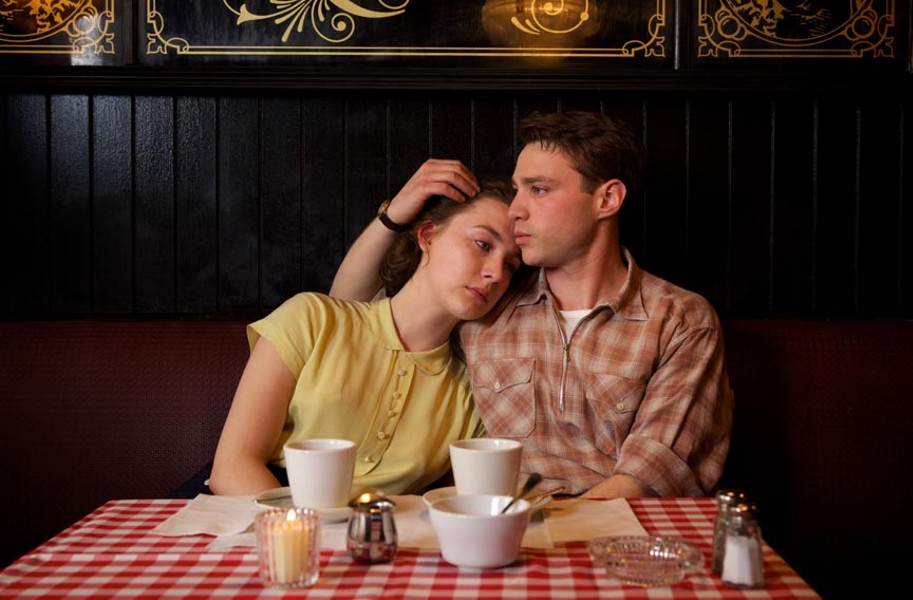 Brooklyn” isn’t just any romantic melodrama. It’s so big and gooey and overwhelmingly sentimental you wonder if the ghost of Douglas Sirk isn’t sitting next to you snickering at the sugar bomb exploding in your brain.

Based on the novel by Colm Tóibín, the story is about Eilis (Saoirse Ronan), a young Irish girl who moves to Brooklyn in the 1950s only to be romanced by not one but two handsome young men. Which one will she choose?

But first, she’s tearfully waving from the bow of an ocean liner at her sister, Rose (Fiona Glascott), and Ma (Jane Brennan), and then throwing up on the high seas while she makes the long voyage away from home.

It’s hard to tell if “Brooklyn” is a big movie in a little package, or a little movie in a big one. It isn’t very long, but it covers a lot of ground, on both sides of the Atlantic, with sweeping sets and sweeping emotions. Eilis’ journey to America is miserable, but upon arrival she gets set up right away in a Brooklyn boarding house run by a strict but ultimately likeable Mrs. Kehoe (Julie Walters). Eilis’ natural shyness and circumspection attracts people to her, eventually winning over even the cattiest fellow boarders who initially view newcomers like week-old mutton stew.

We’ll call this period the saga of Eilis in Brooklyn. Beset by pangs of homesickness, she has trouble at her new job, with an overbearing new boss (Jessica Paré of “Mad Men”) and the kindly father, who helps Eilis with night-school classes and invitations to local Irish immigrant events such as weekly dances. There she meets a young man with a thick Brooklyn accent named Tony (Emory Cohen), a young Italian-American guy who claims he just likes to go to Irish dances to meet Irish girls.

Such an admission probably would send most girls running, but Eilis is too diffident to be rash, and lets Tony talk to her long enough to charm her into another date, and then another one, until the two are something of an item. It’s then that the movie sends in the complications you knew were coming the first time Tony doffed his cap.

Eilis is beckoned home for what we’ll call the film’s Irish saga. There’s trouble back on the Emerald Isle, and when she gets there the temptation to stay is immense, despite all the obstacles she overcame to create a new life abroad.

The film is gorgeous. The period detail might not be perfect, but it’s interesting, with young women and men dressed and shaped the way they thought was attractive at the time, which might seem odd to today’s eyes. Girls had fuller figures, and their guys were most prized if they were gentlemen. James Dean was an outlier.

The only big problem with “Brooklyn” is Tony. Tony isn’t just Italian. He’s a plumber, he loves da’ Brooklyn Dodgers, and he speaks like he took a three-week crash course at the Los Angeles Academy for 1950s Italian-American Accents. Bada-boom, bada-bing, he’s romancin’ an Irish goil.

I wanted to like Tony. I wanted Eilis to like Tony. But then Jim Farrell (Domhnall Gleeson) arrives during the Irish part. He’s a tall rugby player who looks like a young Jimmy Stewart, and has his own house, which makes him baller rich by Ireland’s standards. In a twist you could see coming from across the ocean, Jim falls for Eilis as well. Did I tell you Tony is a plumber? Luckily for him, “Brooklyn” is based about 27 blocks west of reality, because he’d have zero chance with Eilis there.

In the end I just couldn’t like Tony like I liked “Brooklyn.” He’s just too comically Italian-American, a problem in a film that already requires so much suspension of disbelief, a willingness to let writer Nick Hornby (“Wild”) and director Jim Crowley (“Intermission”) fill your head with pure romantic fantasy.

“Brooklyn” is highly recommended to those who like to get lost in that kind of fantasy. It’s so anachronistic, not just a movie made about another time, but one that seems made for another time. “Brooklyn” is a movie about the 1950s the way we like to imagine it, rather than the way it really was, no matter what continent you’re viewing it from. (PG-13) 111 min. S