P.T. Anderson's follow-up feature on the American spirit is even more demoralizing. 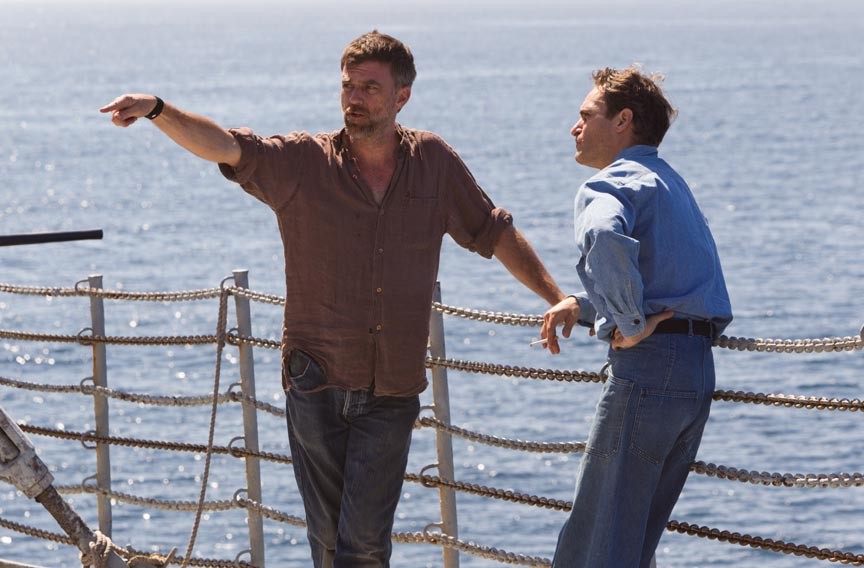 Paul Thomas Anderson's "The Master" and its titular character have been interpreted, "Citizen Kane"-like, as a veiled stand-in for Scientology and L. Ron Hubbard. But that's only one aspect of Anderson's most oblique and disturbing work to date, a controlled and complicated character study set in the immediate postwar period.

For one thing, its main character isn't "The Master," but a man who falls into his orbit: a mentally wounded ex-soldier suggestively named Freddie Quell (Joaquin Phoenix). His unusual interaction with Lancaster Dodd (Philip Seymour Hoffman), a cult leader working on his latest book, forms the bulk of the film, but before and after all that we just have Freddie.

We meet him during the waning days of World War II. The Japanese have surrendered, and men such as Freddie are being returned to civilian life. We've already had strong hints this will be a difficult transition for our guy, who likes to brew his own mind-altering beverages out of ingredients as strange as paint thinner. While the film jumps through different moments, his postwar life grows increasingly precarious.

One moment Freddie's being treated by the Navy for what was then deemed shell shock. The next he's working as a portrait photographer in a department store, where he tries to strangle a customer. Next he's picking lettuce with migrant workers, before being chased away after a batch of his homemade brew poisons a man. The defining moment comes when he surreptitiously jumps aboard a yacht about to set sail with Dodd, his equally peculiar wife (Amy Adams) and the followers of his nascent cult.

A particularly daring aspect of Anderson's film, which, like all of his others, he wrote and directed, is in the way he short-circuits this conventional development. Freddie's meeting with Dodd is the moment in most works of fiction where the protagonist meets his antagonist, a great challenge that will define his story. Maybe it turns out well, maybe it doesn't, but the character will change, maybe even find some kind of personal salvation or catharsis. But for Freddie, meeting Dodd is just another unfortunate event, the worst yet. An inexplicable and twisted friendship develops, between one man too self-centered to do anything but exploit and another too unstable to resist.

At this nexus Anderson lays bare many things, including the nature of cults and their ugly dependence on the weak. There's a particularly gruesome jailhouse scene in which Dodd screams, "I'm the only one in the world who likes you, Freddie!" It's true, and God help him. Freddie soon is back with Dodd and his followers, who begin tormenting him unambiguously in scenes almost too sad to bear, all in the name of Dodd's absurd mystic ramblings.

And yet, during it all, Anderson carefully avoids moralizing. Dodd is loathsome, but he isn't introspective enough to realize it, robbing the audience of the ability to hate him. He's just a selfish opportunist, his obsession with Freddie no more explicable than his pseudo-scientific mumbo jumbo except that it feeds his monstrous ego. Hoffman blusters and wheedles through the role with all the skill you'd expect from the Academy Award-winning actor. It's a good performance. Phoenix's is a great one.

As Freddie's torment continues, his body seems to shrivel and twist. His face contorts into a hideous mask, showing us a man always on the brink of sanity, not the other way around. Another particularly melancholy scene late in the film, during a hopelessly tardy attempt to reconnect with a former love, offers Phoenix at his best with Freddie at his lowest. Anguish, embarrassment and confusion turn in his expressions like a baleful kaleidoscope.

The end is nigh, and when it comes the feeling you walk away with is relief. Even if you admire the movie and appreciate its many merits, you don't enjoy it. "The Master" may be the most uncomfortable 137 minutes of mainstream film. There's a sense of humor here, but it is grim. Even those who saw "There Will Be Blood" as the culmination of Anderson's prodigious talents will be surprised by this film's dearth of audience gratification. Perhaps because it's set half a century later, sunk further in the same spiritual mire, there's even less hope to be found. (R) 137 min. S