A caring but mild provider of comic medicine. 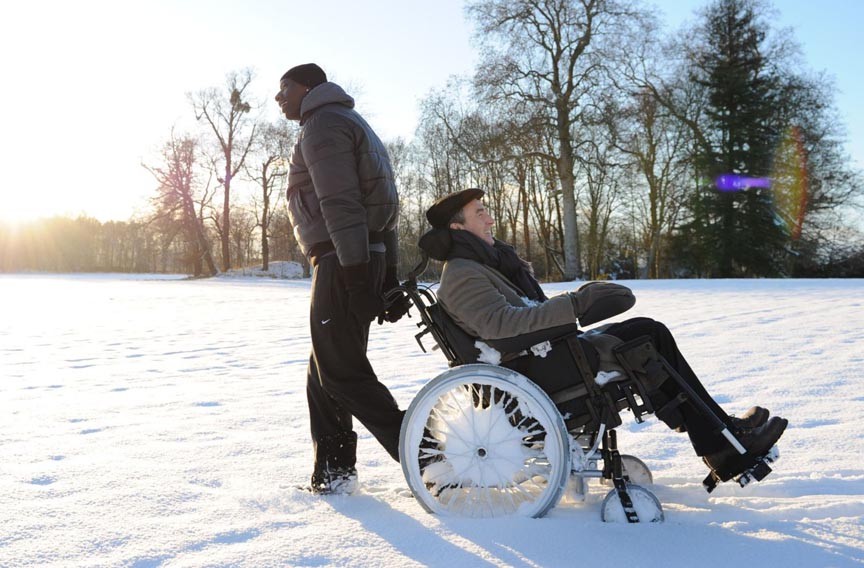 "The Intouchables" opens in the interior of an expensive, high-performance automobile driven through Paris by Driss (Omar Sy), whom we learn is the caregiver of his passenger, Philippe (François Cluzet). Philippe is handsome, wealthy and learned, and also a quadriplegic. Driss is handsome, uneducated and, we eventually learn, so poor he's sometimes homeless. The duo are the center of this heart-tugging movie about opposites who come together in completely unsurprising ways. It's only surprising how unsurprising "The Intouchables" turns out to be, considering its popularity in France. It's about as daring as the fine wallpaper in Philippe's mansion. Formulaic and mild-mannered, it ticks off genre conventions faster than a Hollywood producer before dumping its characters back into the present for a sappy sendoff.

Things look promising for a while. After Driss and Philippe's speeding spree, men and movie glide back into the past, when Driss first applies to be Philippe's caregiver. If you think too much has been given away too early, I agree. The movie plays it safe, letting you know even before the main plot begins that Driss will end up with a leg up from the rich white guy. Driss applies for the job just so he can prove to unemployment that he's performed one of his two mandatory monthly interviews. Rude to Philippe and lewd to his comely secretary, Magalie (Audrey Fleurot), Driss is surprised to be called back the next day and given the job, plus princely room and board.

There's even a good (if fairly predictable) reason provided for why Philippe takes such a shine to Driss. Driss might be a burglary away from going back to jail, but he's also quick-witted, entirely unguarded and impolite — attributes Philippe, stifled by impeccable nursing, can't resist. He confides to a concerned friend that he hired Driss precisely for the reasons friends and employees think he shouldn't have. Driss, he acknowledges, is inconsiderate and maybe even a little dangerous, but most importantly he's "pitiless," which Philippe believes is exactly what he needs.

Same goes for the movie. Omar Sy gives Driss an undeniable vitality. He isn't an actor but a star, whose principal talent, much like his characterization of Driss, is an irresistible magnetism. But it's a talent thwarted at every turn. This is the story of someone giving a physically challenged man's life a kick, and it's too bad the same couldn't have been done for the film. The script, entirely unlike its main character (and its message), avoids playing too fast and loose with the rules. In fact, the opposite holds true. The flashback framing device robs the movie of its initial narrative thrust, further undermined by a disinterest in craftsmanship from writer-director team Olivier Nakache and Eric Toledano. Fatally conventional, the movie barely looks at the real problems and pain these men must carry around with them, employing far too many breezy scenes whose only purpose is to hammer home the odd-couple dynamic.

These include Philippe introducing Driss to opera, Driss introducing Philippe to disco and Philippe introducing Driss to modern art. It's a wonder the French filmmakers' ethno-centrism (identified in less kind circles as blatant racism) didn't extend to a scene of Driss teaching Philippe how to throw dice or shoot hoops. In fairness, many of these scenes are genuinely funny. There are even laugh-out-loud moments. The movie isn't entertainment-free: It's all comic relief and no tension.

"The Intouchables" is captured at too far a distance, as if it were a corporate brochure about what people can teach each other. It's conceivable that either of these characters might have provided a better story if things were told through their eyes. There's no need to manufacture conflict, but certainly there was enough for a book that warranted a movie. What happened to it? You may ponder such notions late in the proceedings, when the main characters take a trip to some nearby mountains to go paragliding. The setup and payoff for that gentle bonding exercise takes about 15 minutes alone. Does this sound exciting? If not, you might be advised to look for a summer film that's less dramatically challenged. 113 min. S