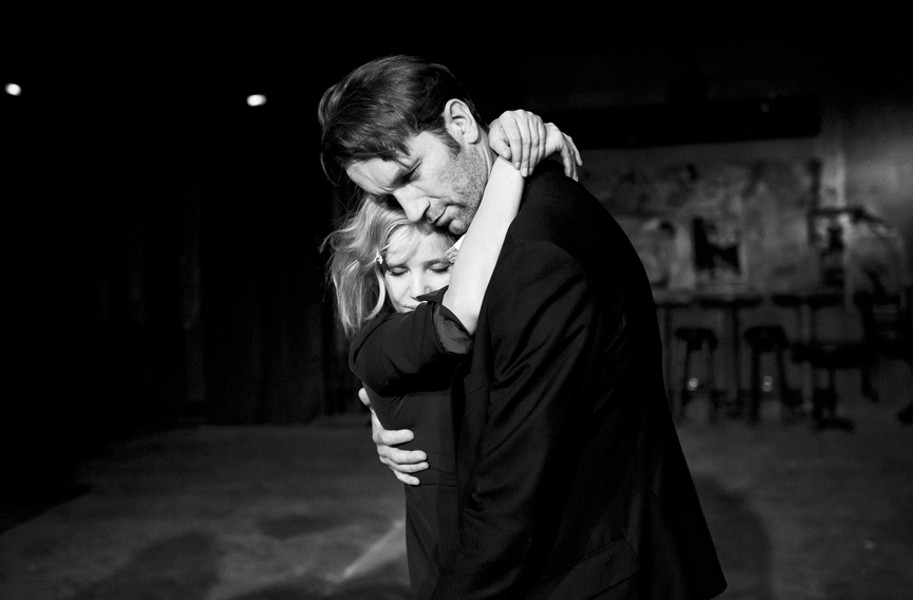 "It's a metaphor," claims a poet (played by Jeanne Balibar) about a song she's written for one of the main characters in Paweł Pawlikowski's beautiful if emotionally discordant film about two lovers in post-World War II Eastern Europe.

I wondered, much later, if that bit of metaphor explaining was a hint. The political climate in Poland and often Kafka-esque situations it imposes on the film's characters are open targets. The movie doesn't have to be a metaphor for the postwar nation, or communism, or life under the Soviets, but it might help explain the characters' actions, which are often baffling.

The story opens in rural Poland, where Wiktor (Tomasz Kot) and colleague Irena (Agata Kulesza) travel through the snowy countryside auditioning peasant performers for a troupe ostensibly commissioned by the government to become a people's army of folk song and dance.

Wiktor, a pianist, is smitten at the audition of Zula (Joanna Kulig). The singing partner we see Zula replace may have better tone, he admits, but Zula has that ineffable "it" factor. She's accepted into the troupe and after a few years of hard practice develops into a decent performer. Wiktor and Zula also develop a tempestuous romance that will affect their entire lives.

The film's marketing plays up this romance in a slightly misleading manner, the official trailers throwing out press quotes like "romance epic" and "dazzling odyssey through the human heart." Many if not most reviews have followed suit. The impression one takes away is that "Cold War" is something akin to the black-and-white, Soviet bloc version of "A Star Is Born." But this story is far from it.

Wiktor loves Zula, and so do many men, but for reasons that can seem inscrutable if not obtuse. She is attractive, but not overly so. She can sing and dance, but not in any special way. As Wiktor's fateful love she is, to put it mildly, frequently disappointing. He keeps calling her the love of his life, and we wonder why.

Zula is mercurial, vexing, even cruel, prone to ruining their relationship and their lives, seemingly at whim, all while promising undying devotion. She inexplicably leaves him in the lurch so many times that one more time might have drawn laughter. And she does so for reasons that are capricious, no more reasonable from a mortal's point of view than the actions of an ancient goddess.

Which brings us back to the metaphor question. Is Zula a stand-in for postwar Poland, the homeland Pawlikowski's parents fled with their son in tow during the late 1970s? For communism? For society? Or maybe it's simply human nature that Pawlikowski is after, and Soviet communism is a worthy selection for critique. In an interview with The New Yorker, the director noted that the characters are even named after his parents.

Pawlikowski has returned to these lands and times often in his work, most recently in the Academy Award-winning "Ida" (2013). It seems telling that Wiktor and Zula meet just as the war has ended, with the people of Eastern Europe getting used to Soviet rule. The story lasts, in fits and spurts, through its long and winding evolution spanning 15-plus years.

And the ending, wow. The surprise that awaits viewers hoping for epic romance tops everything that proceeds and negates it all at the same mind-blowing time. Wiktor and Zula's relationship isn't merely difficult; it's a sad, black comedy.

The film's stunning look is an excellent counterpoint. "Cold War" lets down viewers looking for vicarious romance, and it does so with period re-creation so lovely you want to crawl in and live there (if not for the dreadful autocracy awaiting there, of course). Pawlikowski shot "Cold War" in black and white and in the 4:3 aspect ratio of the era.

Not only does it impressively re-create the times, but feels of those times, more like a film slyly addressing communism in the late 1950s than in 2018. Maybe this is the rare gratifying instance of box office bait and switch. Audiences may not get what they came for, but they might get a director's greatest work instead. (R) 88 min.