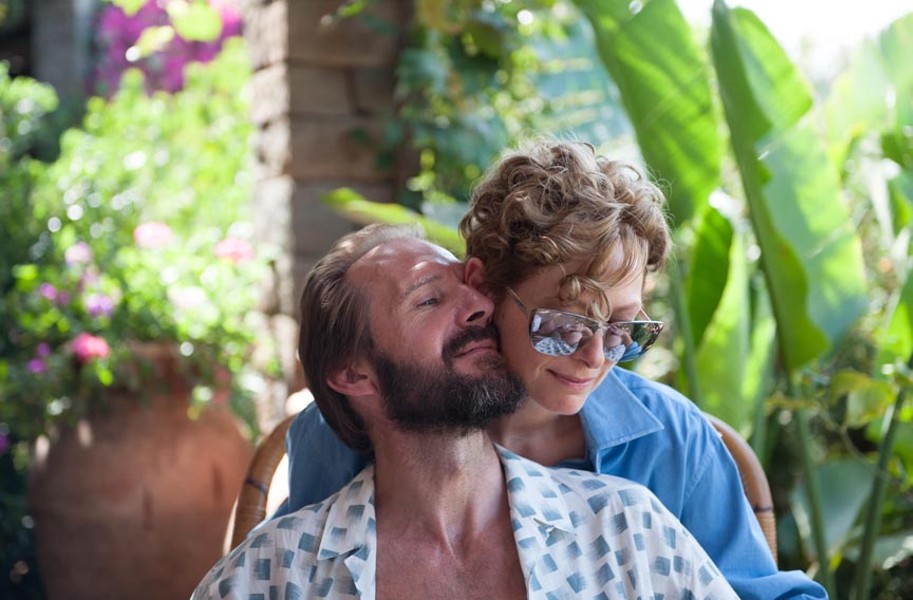 During its opening minutes, “A Bigger Splash” feels like a proper follow-up to that film. But then the mood is shattered, most appreciatively, by Harry Hawkes (Ralph Fiennes), a blustery, boisterous British music producer who, like a walking brass band, barges into the quiet island vacation of Marianne (Tilda Swinton) and Paul (Matthias Schoenaerts).

The former is a famous rock star and the latter her documentarian boyfriend. Both are taking a leave of absence while Marianne recuperates from an operation aimed at saving her vocal chords. On doctor’s orders, she cannot speak, which vexes her garrulous old friend Harry to no end. That’s OK, though, he’ll do the talking for the both.

Films usually open on the main character or characters, but Marianne and Paul seem like red herrings. The gravitational pull in this vibrant if sometimes puzzling tale is all Harry, who insists on being the center of attention always, be it at a karaoke bar, a luncheon, or a movie about two people trying to get away from the world.

Harry, supposedly, did some influential producing on one of the Rolling Stones’ albums back in the day. Maybe, maybe not — but certainly he knows their music and how to get a party started with a spin of “Emotional Rescue.”

Harry may be an uninvited and slightly unwanted guest, with a motor mouth reminiscent of Ben Kingsley’s Don Logan in “Sexy Beast,” but he’s not a bore. He’s a perpetual teenager, with a near-teenage 22-year-old daughter, Penelope (Dakota Johnson), in tow. Always expected to do the unexpected, Harry, it’s revealed, set Marianne and Paul up back in the day, back when Harry was her longtime lover.

“It’s done, you take her, she’s a great lay,” is basically what Harry told Paul, before Paul ever even met Marianne. Six years later Harry has changed his mind. He wants Marianne back. And nothing will stop him!

Not even the intimation that he’s also sexually attracted to Paul, nor what he calls “the shit in his head” about his own daughter, nor the impetus to copulate with pretty much anything with a human pulse within a several-mile radius. Bollocks. He must have Marianne back.

It’s too bad “A Bigger Splash” wasn’t released closer to award season. Harry Hawkes and Ralph Fiennes are in danger of being forgotten about by then, which would be a shame. It’s amazing to see the dashing, blond actor of “The English Patient,” reminiscent of Peter O’Toole in “Lawrence of Arabia,” carousing as an over-the-hill rock ’n’ roller, chiseled bod oddly juxtaposed with thinning hair, eyes aflame with zeal whether he’s engaging a magical hillside restaurant, car trouble, or a table full of cocaine.

Maybe he’s just horrified that the calm, collected Paul, who dutifully helps Marianne, a significantly older woman, with her medication, is turning her into something more normal. Swinton also deserves recognition for her performance, revealing a wide range of feeling with less than a few raspy sentences at her disposal. The rest is largely pantomime and subtle expression.

Also noteworthy is the cinematography by Yorick Le Saux, filming the stunning Italian island Pantelleria in rain and sun with impressive agility and imagination. Like last year’s “The Clouds of Sils Maria,” “A Bigger Splash” defies the plain and banal visual constraints that haunt the film festival circuit, often taking the camera on wild rides both high and low. Walter Fasano’s editing also bears remark, embracing both hard cuts and luscious long dissolves, defiantly out of fashion though they may be.

The film has its share of curiosities, too, and some outright problems. The casting of Johnson is a big head-scratcher. An intended Lolita figure, she looks 32, not 22, and even at that age seems stuck on a one-note interpretation of insouciance. But director Guadagnino seems attracted to stories that don’t play by the rules. If a moment is unclear or even stupefying, it could be intentional, much the way it seems intentional that the audience loathes spending time with the stultifying, patriarchal clan in “I Am Love.”

The opening dinner of that film is chore to sit through, which must be what it’s really like to live it, and what drove Swinton’s character, in that story, into the arms of another man. Now we know better: All that such worlds need to make them livable is Harry Hawkes. Without him even beautiful Pantelleria would seem a bore. (R) 124 min. S