Ridley Scott's latest re-explores the origin and future of a science-fiction franchise. 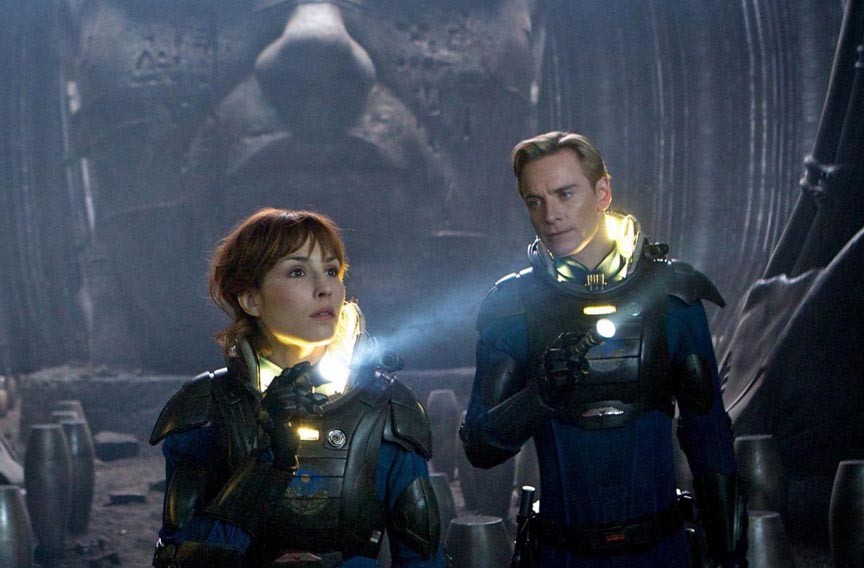 Carl Sagan's book "The Dragons of Eden," first published in 1977, begins with a quote from the Roman-era philosopher Plotinus: "Mankind is poised midway between the gods and the beasts."

So too do the crew members of the Earth spaceship Prometheus find themselves in Ridley Scott's pseudo prequel to his 1979 film "Alien." Anyone who has seen that movie or its 1986 sequel knows what creature plays the beasts, slightly changed in the new film. "Prometheus" is more concerned with the gods, although the beasts are never far around the corner. It's easy to imagine Sagan appreciating this summer science fiction film for at least trying to be sciencelike with its fiction. Also similar in ways to Sagan's "Contact," "Prometheus" has ideas about the past and future of human evolution, the ability to one day explore the galaxy and the danger of that lure into space.

Although not strictly a prequel, the movie takes place before the events in the first film, with the characters in a situation similar to Sigourney Weaver's Ripley in "Alien." An expedition, led by two scientists (Noomi Rapace and Logan Marshall-Green) and a corporate overseer (Charlize Theron), discovers a similar "dead" alien ship on a dust-swept world. Their group also includes a Hal-like villain and a gender- and ethnically-diverse crew to provide fodder for too-close-for-comfort encounters of the third kind. In this case the landing and exploration is purposeful.

All are there to figure out why disparate ancient Earth cultures pointed to this particular planet in various primitive art, and, after landing, why what they've found is long expired (or maybe just dormant). How the ancient Earth cultures could see or know about a distant solar system is dubious, and brushed over so fast you might be tempted to think the movie doesn't know. But it's an intriguing idea followed up by science-fiction concepts alternately serious and somewhat equally dubious.

The astronauts are looking for their maker. Sagan's book also is about the origin of human intelligence, but unlike the film, he doesn't think aliens were involved — at least not purposeful alien "engineers" (the movie's concept). He proposes another engineer: competition. He theorizes that we are the end result of millions of years of evolutionary war between mammals and reptiles, warfare that ended with the reception of technology from Prometheus, or evolution, through the development of brains with neo-cortexes. Small-brained reptiles didn't stand a chance against frontal lobes. Cleaning up the world of large lizards, or dragons, freed us to nearly destroy it with pollution. But provided we don't, theoretically one day we should be able to do wonders such as creating artificial intelligence and visiting the nearby stars. All are ideas explored by the film, which adds the nuttier but still interesting notion that all of this was set in motion by advanced beings. Scott also adds the qualification that for our efforts, we eventually find the war still raging in space, where other reptiles, or at least other dragons, have evolved biological machinery capable of dealing with higher intelligence, even ones vastly ahead of ours.

Like those cave paintings and hieroglyphs, the reason the Earth crew finds both gods and monsters on the distant planet is somewhat obtuse. So are the actions of the ship's android, David (Michael Fassbender), who fashions himself after Peter O'Toole's Lawrence of Arabia, both in hairstyle and willful attitude. He does what he wants, and it isn't always certain why he's doing it.

Yet unlike the cave paintings, these difficulties are more easily accepted as mysterious riddles with many potential answers, and in fact seem purposefully open-ended. The cave-painting theory is never fully connected to the results of the mission. The crew never figures out what it's found, and neither does the audience. Certainly both will be back in subsequent installments to find out.

Humans can't help themselves. The Prometheus crew members are always going places and touching things they probably shouldn't, especially the android member. Maybe he feels emboldened by his near immortality or by his human-constructed processing power. His comeuppance is a delightful denouement. There are problems. Theron overacts again after her recent, equally embarrassing turn in "Snow White and the Huntsman." Too often the Prometheus crew is forehead-slappingly stupid.

Overall, though, Scott's film is an entertaining evolution of what was most compelling about the original: The great vista of unexplored space is both tantalizing and, perhaps, best left alone. The testament to the film is that we hope its fictional explorers ignore the warnings, and take more heedless journeys into the dark. (R) 124 min. S